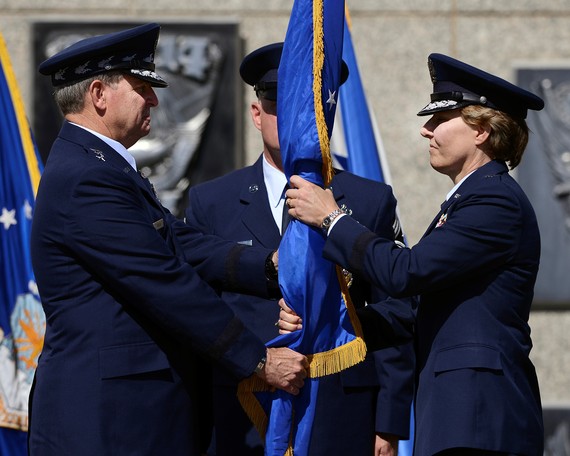 The Honor Code is one of the most important cornerstones of ethical development at the U.S. Air Force Academy. It sets the minimum standards of acceptable conduct for cadets. This concept is carried forward after graduation, where "an officer's word is his bond."

The revelation that an advocate of discredited "ex-gay" therapies, Dr. Michael Rosebush, had been hired and promoted by the Academy has shaken those within the Academy as much as it has shocked the nation. But from within the Academy we are hearing different words, indeed two very different versions of the situation. Whose word, whose bond, should we believe?

On one side the Academy leadership has met with the lesbian, gay, and bisexual (LGB) support group Spectrum and officially reported that these cadets had no complaints about the environment at the Academy. On the other hand, anonymous cadet sources claim that the environment for LGB cadets is toxic. So who is telling the truth? They both are. The difference is the closet.

The members of Spectrum are LGB cadets as well as supportive classmates. The structure is similar to high school gay-straight alliances that unite all orientations into the common goal of open acceptance.

As an officially recognized affinity group, Spectrum members are allowed to use meeting facilities and are assigned an officer representative to assist them in their relationship with the higher-ups at the Academy. After repeal of the "don't ask, don't tell" (DADT) law, all five service academies established their own Spectrum organizations.

Most of the LGB members of Spectrum are out to their fellow cadets and likely to their civilian friends and family as well. Being a member of this group allows a cadet to feel welcomed and have access to the command structure. By serving openly and honestly, out LGB members have none of the pressure that is on those who remain in the closet.

In most cases, those who are not out have a different take on not just the environment at the Academy but life in general. Have you ever met an LGBT person who said that life was better living in the closet? Can anyone imagine how difficult it must be to survive in the highly regimented and disciplined environment of a service academy and to have to keep your real self a secret? The closet is a pervasive and pernicious thing.

Being in the closet imposes a filter of fear that affects how all situations are seen and experienced. Here is a portion of an email written by one of those cadets who is not a member of Spectrum, courtesy of the Military Religious Freedom Foundation:

I happen to not be out and have no intention of ever being out while I attend USAFA. I am a current cadet at the United States Air Force Academy.... I am Christian.... Of course to be in Spectrum you have to out yourself. If I and the many other cadets I know who are LGB came out it would be devastating for our cadet and future Air Force careers. Being LGB here is like not being an "all in" Christian. You're finished....

What a crock that press release is. What a crock the academy leaders are for keeping Rosebush here....Those of us who are LGB live in the worst fear of being outed at any moment and suffering for it. Maybe Rosebush can magically make us all "un-gay"? Do you know how it makes us feel to know that our school has a man like that here? And how many other Rosebushes are here? If people can't see it now they never will.

Having USAFA keep a person like Rosebush on staff at CCLD here shames all of us. He believes we made a choice to be LGB. He believes us to be "sick" with that gay disease. He believes we are sinning and will go to hell if we don't repent through Jesus and "choose" to be straight. And he has a "counseling" plan to make us all straight? Doesn't anyone of the higher ups here know how that makes us feel? It takes away our dignity as human beings. It takes away everything of value.

Why, one might ask, does this cadet feel compelled to stay in the closet even after the repeal of DADT? The answer is complex and calls for understanding and patience. The personal reasons for not coming out may be myriad, but the struggle is the same one that all LGBT people go through at various points in our lives.

The struggle starts with fear of rejection. First is the fear of rejection by the people you love among family and friends. Next, religion increases pressure to remain closeted because knowing that your religion considers you a sinner, not worthy of the kingdom of God, is too much for many to bear. Furthermore, in the military context, fearing that you will be ostracized and not considered part of the team causes great stress. Then there is also a very real possibility of bad evaluations from superiors who are not LGB-affirming, causing you to fall behind your peers in assignments and promotions, and eventually ending the career you love.

The Academy cannot give these closeted cadets the personal courage to come out. That is a decision that only they can make for themselves. But what the Academy can do is recognize that there are closeted LGB cadets who find the atmosphere unwelcoming. It is up to the leadership to change this atmosphere so that it can get top performance from its people, who should bring all of themselves to any task. Certainly, the continued presence of Dr. Rosebush, in his present position as a staff member of the Academy's Center of Character and Leadership Development, does not have a positive impact on the command climate.

There is a concrete step that the Academy can take. During the 1990s many businesses, high schools, and universities established "Safe Space" programs. These programs allowed for the creation of a culture in which all people -- gay or straight -- could self-identify as individuals who were committed to a nonjudgmental, safe work environment. These individual statements (often made by simply putting up a sticker) said nothing about one's sexual orientation, only that the person supported equality, diversity, and the right of each person to be safe in the workplace.

These undertakings have proven highly successful in improving the lives of LGBT employees and students. Corporate America and universities have led the way by showing that inclusion creates stronger teams with better performance. Since the repeal of DADT, the Academy is facing this problem for the first time, but the path forward can easily be seen.

In a place like the Air Force Academy, with its command structure and leadership from the top, it is the duty of those in positions of authority to confront and remedy the problem of an anti-gay environment or command climate, whether it is real or perceived. The repeal of DADT was only possible because of buy-in and leadership by officials at the highest levels of government and the military. This present crisis is an opportunity for the Air Force Academy leadership, and its first woman superintendent, to move forward and demonstrate that the Academy will be a leader in the new, more diverse military of the 21st century. Make it safe for all people -- in the closet or out -- to give their word as their bond. The nation will be better for it.