On September 18 the U.S. announced that they are shutting down USAID activities in Russia at a request of the Russian government. All operations will have to stop by October 1. In a short statement, the Department of State celebrated accomplishments of AID's work in the country over the last 20 years and promised to continue cooperation with Russian NGOs.

The reason for Kremlin's actions are clear. As domestic unrest continues in Russia, the regime is looking for ways to silence the increasingly vocal civil society. Organizations that USAID has been supporting observe elections, investigate corruption and human rights abuses, and expose many other problems that have driven tens of thousands to protest during the last year. 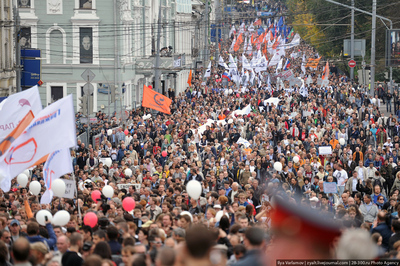 Unsurprisingly, Vladimir Putin's regime is determined to cut sources of funding for these NGOs. The business community is afraid to be involved in "politics" (however broad the definition of it may be), fearing to share the fate of oil-tycoon-turned-philanthropist-turned-political-prisoner Mikhail Khodorkovsky, and government grants are not an option. So there isn't much choice for civil society organizations other than to raise funds from foreign donors. There is also a growing trend to attract small donations via the Internet (a.k.a. crowdfunding), but not every initiative can be sustained that way.

End of USAID operations and imminent attack on the remaining donors poses a very serious threat to development of the country's civil society for years to come. It is also a very visible sign of Putin's regime growing isolation from the world in an attempt to preserve status quo and stay in power. With relatively unrestricted Internet and freedom of travel, they can't build the Iron Curtain anymore, but perhaps a Glass Wall. You can watch, but you can't do anything.

If this is to be prevented, U.S. policy toward Russia has to be reconsidered. Humiliating expulsion of USAID and especially the State Department's reaction to this (they even failed to express any displeasure with being kicked out, much less protest it) means the end of the "Reset." After three years of attempts to repair Washington-Moscow relations and appeasement of the Kremlin, the Obama administration now has to deal with an even more anti-American, aggressive, and assertive Russian leadership than in 2009. The only force that can potentially change this is Russia's own civil society, but it must not be left one-on-one against the oppressive and corrupt state Mr. Putin leads.

With USAID shutdown, perhaps it's time to reanimate the idea of creating a fund specifically designated to promote democracy and human rights in Russia. This was proposed by the current U.S. ambassador to Moscow Michael McFaul about a year ago, but the idea was barely mentioned since. This project, however, will require not just a (relatively small) financial commitment by the U.S. government, but also persistence in the face of inevitable Kremlin's protests and threats. And there is little ground for optimism on that latter one, given the recent history of relations.

It's not just about funding, though. Another crucial move the U.S. can do to improve prospects for democracy and rule of law in Russia is to pass the Sergei Magnitsky Act. The bill that proposes visa bans and bank deposit freeze for officials involved in grave human rights abuses is stuck in a political limbo in the Congress, despite broad bipartisan support. Adopting this law will send a strong signal to the Russian elites that their misdeeds are not going to stay unpunished and to the Russian people that the U.S. is on their side.

As more and more Russians get disillusioned with Putin's regime, fundamental changes are on their way. They will eventually come from within, regardless of what the West in general and the Washington in particular does. But U.S. involvement can influence their character: bloody, messy and xenophobic or peaceful and leading to a more democratic, stable and open Russia. The question is, can the U.S. find moral strength and political will to withstand Kremlin's pressure in order to defend their values and win trust of Russian people -- or will they trade it for a temporary illusion of no open conflict? Whoever occupies the White House for the next four years will be forced to give an answer soon.