If you own an iPhone, you should definitely secure it with a passcode. That's a no-brainer, and I hope all of you lovely people have done so.

But how strong is your passcode, really? By default, your iPhone password is what Apple calls a "simple passcode," which is a combination of four numbers entered in on a keypad. A couple years ago, Apple also added the ability to turn your passcode into a combination of numbers and letters, from 5 to 12 characters in length. Both of those options create strong passwords, but -- like my memory, dancing skills, and biceps -- your password could still be stronger.

How's that? Well, a handy tip we spotted from Digital Inspiration can elevate your iPhone's passcode security to a very high level. Instead of confining yourself to the numbers and letters that are immediately visible on your keyboard, try using the accented characters that appear when you press and hold a letter down.

It's quick, it's easy and it's tougher to crack than whatever you have now. Here's how to implement it.

First, you'll need to know how to access those accented characters. On the iPhone keyboard, if you press and hold down certain letters -- the letter S, for example -- a menu pops up with several alternate, S-like characters. Go ahead and try it with the letter S. You should see this. 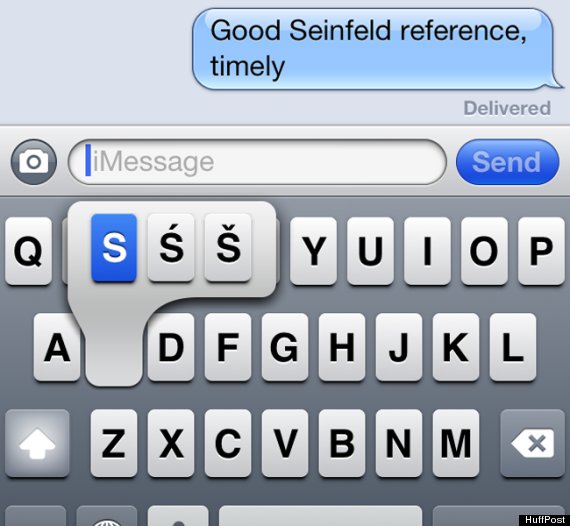 It works with several other letters, too. including A, E, I, O, U and (always) Y. You can take these diacritical and otherwise accented characters and intersperse them into your password to create a Frankenstein of a code that would be difficult for anyone to guess.

Obviously, this is going to mean a teensy bit more time to unlock your iPhone. But if your phone gets swiped -- or if you suspected a nosy BF or GF of spying on your phone -- you might find the extra two seconds was worth it.

So, once you've chosen your super-strong passcode, you can set it by following these simple steps:

1. Open the "Settings" app. (It has a gear on it).
2. Go into "General."
3. Go into "Passcode lock."
4. Make sure "Simple Passcode" is switched to off. (The Simple Passcode is the four digit combo described above).
5. Select Turn Passcode On and enter your passcode (with accented character(s)!) twice.

Voila! There's your new, tougher-to-guess passcode. Your husband, child or iPhone thief will have no idea what hit 'em.