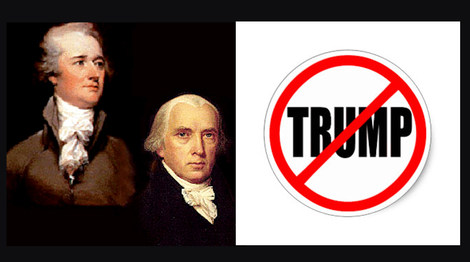 Here are a few points of importance on this matter:

1. The United States is not a democracy. If it were, the person who gets the most votes would win.

2. In 2012, Mr. Trump denounced the Electoral College as "a disaster for democracy" in a tweetstorm in which he called President Obama's reelection "a sham and a travesty," despite the fact that Mr. Obama won both the popular vote and the electoral vote handily.

3. Imagine for a moment what Mr. Trump and his followers would be saying and doing if he had won the popular vote and Mrs. Clinton had won the electoral vote. Does anyone doubt that he would be calling for revolution?

4. Actually, we don't have to imagine it, because four years ago that's exactly what he was calling for. On November 7, 2012, Donald Trump tweeted that US citizens should "march on Washington and stop this travesty," and that the country needed to "fight like hell and stop this great and disgusting injustice." And, remember, that was in a case in which the president had won both the popular and the electoral vote.

5. The idea of the Electoral College when it was set up in the Constitution was nothing like what we are seeing it do in modern times. It was intended that the people would vote for wise men who would then get to deliberate together and choose the most qualified person. Is there anyone, other than Donald Trump himself, who would think that such a group of wise men--and now women--would choose Trump as the most qualified?

6. The Founding Fathers created the Electoral College precisely for the purpose of guarding against the election of an unqualified demagogue such as Mr. Trump.

7. In light of the intent in the Constitution, there is absolutely no requirement that electors vote for the person who won their state. It is perfectly in keeping with both the letter of the Constitution and the spirit of what the Electoral College was intended to do for electors to vote for someone more qualified than Trump, which describes not only Mrs. Clinton, but thousands, if not millions, of other Americans.

The Electors should be true to the intent of the Founding Fathers, to the democratic principle of s/he who got the most votes is the winner, and to what Donald Trump himself called for four years ago, and choose the best, most qualified person to be our next president. Plainly, that person is not Mr. Trump.