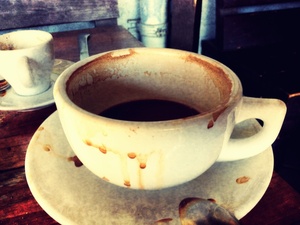 I love espresso. But I remember sometimes "waking up" suddenly and finding myself right in the middle of a shuddering caffeine meltdown. I'd been writing on my laptop at a coffee shop, focused on work. Starting out with a latté early in the morning, I'd just kept ordering and drinking triple-espresso drinks all day long while happily typing away. This caffeine intake had all been in the background, unconscious, until my slapping heartbeat and thundering jolts of anxiety crashed violently into the foreground. I would stop then, but I -- and my friends and partner -- were left to cope with my shaky, irritable freakout for hours afterward.

Addictive behavior loves to lurk in the half-light. If I had been paying conscious attention, I never would have let myself drink that much coffee. But because my mind was occupied with other things, the urge to have more caffeine moved directly from motivation to behavior without examination. When the cravings of the body arise in unconsciousness, we enact them literally thoughtlessly, mindlessly. It's as if there's a motor in the body, the motor of craving, which is directly linked to the wheels of action. When the motor cranks, the wheels turn. Vroom vroom!

Mindfulness creates a sort of clutch between the motor and the wheels. It shines the light of consciousness on the normally unconscious linkage between craving and acting on craving. The "clutch" of mindfulness builds in some space, some time, and some choice into behavior. By noticing the arising of craving in the body, you can consciously decide whether or not to act on that craving.

Neuroscientist and avid meditator Judson Brewer, head of the Therapeutic Neuroscience Lab at UMass, has shown* that mindfulness meditation -- particularly the practice of open awareness -- can drastically reduce addictive behavior. Specifically, meditation reduces activity of an area of the brain known as the posterior cingulate cortex (PCC). When the PCC turns down, the mind comes out of its daydream and breaks into awareness of the present. This is the actual neural mechanism of the clutch -- voluntarily dialing down PCC activity by tuning into moment-by-moment sensory experince. The very essence of mindfulness.

Mindfulness can provide a clutch that can build some decision-making ability into any mindlessly addictive behavior, whether cutting back on chocolate binges, stopping smoking, turning off Netflix after one or two episodes of your favorite show, or more serious, life-destroying addictions. In my case, it's helped me to regulate my caffeine intake to a healthy, reasonable amount. My body appreciates it, my friends and partners appreciate it, and I appreciate it: the newfound freedom from robotic behavior. If I notice an unhealthy urge or craving arising in the body I just step on the clutch until it passes.