The last thing Alex Tepper expected to find in his lunch was this: A used Band-Aid.

Tepper (who, full disclosure, happens to be this author's brother) found the unsavory addition earlier this month in a bite of ginger chicken from Manhattan Chinese restaurant Friend House.

He'd ordered the dish through the delivery service Seamless. It wasn't until the Band-Aid was in his mouth that Tepper realized something was amiss.

By the looks of pictures taken by Tepper, the Band-Aid appears to have been cooked in the dish itself. Part of the plastic seems to have peeled away from the cloth. 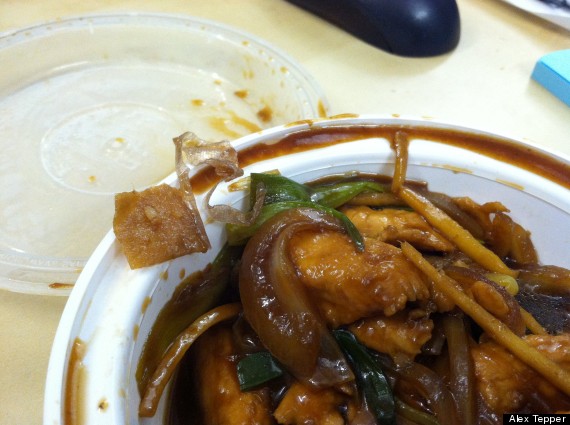 "I got my money back, but I feel really grossed out," Tepper wrote HuffPost in an e-mail. "The pad looked exactly like the chicken in the sauce."

Tepper said the restaurant, despite the refund, did not offer any explanation as to how the Band-Aid made its way into the dish. One thing is for certain, though: He won't be eating there anytime soon.

But used band-aids are just the start of things people find in their food. Check out our previous Mealbreakers below: