The technology involved in creating artificial limbs has come a long way in the last few decades. We have now witnessed a paralyzed man kick a soccer ball at the opening ceremonies of the World Cup, and a double-amputee snowboarding champion stun the audience on Dancing With The Stars. Today's prosthetics include advanced sensors and elements of robotics and nanotechnology, and there are some incredible developments taking place with integrating the body and the mind.

Yet for all the progress that has been made, these devices still look cold, industrial, and impersonal.

To Travis Ricks, an incredibly accomplished athlete, advocate, and educator - and amputee of eleven years - design has been the missing ingredient. Available prosthetics look obviously fake, but, he says, "you're stuck with what they give you: skinny legs and generic covers." While there have been some flashy presentations with soaring rhetoric, not much is actually out there that looks good and is available to consumers at a reasonable price point.

UNYQ (pronounced: unique), a start-up based in San Francisco and Seville that is barely a month old, has set out to change that by selling affordable 3D printed prosthetic leg covers, known as "fairings," directly to consumers. The company was co-founded by legendary entrepreneur Eythor Bender, who is best known for developing a prototype bionic exoskeleton that allows paraplegics to walk again. Bender, who has worked with the disabled for over 20 years, was frustrated by the lack of consideration of style in the medical device development process. Despite all the progress made in other areas, the devices still look more or less like a "wooden stick."

Bender wants to challenge what we think is possible with prosthetics. Using 3D printers, UNYQ can capture the individuality of a person while providing them with an exactly symmetrical replacement limb. The same way that 3D printing has revolutionized the way we create hearing aids, Bender believes that something similar is possible with artificial limbs.

Here, he draws a fascinating parallel to eyeglasses: we would never presume that everyone wants to wear the same pair of glasses, we value style because it reflects our personality; prosthetics should be the same way.

The lack of options has been frustrating for doctors as well. "As a clinician, and as a female as well, I've never been able to have a good option to offer patients in terms of cosmetic covers," says Katie Taylor, a prosthetist who is joining UNYQ as their Clinical Director. "Historically they've been made with foam and a plastic covering that doesn't look like real skin. They get dirty, they're difficult to replace, and very expensive. Often times, people just don't wear them. For the first time I'll be able to say, here's an option for you that's actually really cool. Instead of feeling self-conscious, they can feel stylish, fashionable, and beautiful." 

While the fairings themselves are very fashionable, their greater significance has more to do with quality of life. Prosthetics can sometimes cost several tens of thousands of dollars, and any efforts that help to ease their maintenance or improve their usage is welcome by everybody. But most importantly, it can change the way amputees feel about themselves by directly addressing the psychological trauma that they suffer from their disability.

With UNYQ, Bender's goal is to give choice back to consumers in a field that's been historically dominated by intermediaries. Ordering the fairings directly is a shockingly simple process: you choose a design from their website (or design your own), take eight photos with your phone, wait four to six weeks for delivery, and, four screws later, your prosthetic leg now looks and feels completely different.

But the world is full of promising technologies that don't make much of an impact because they never become accessible to the people that need them. When describing his 2011 exoskeleton demonstration at TED Bender struck a surprisingly sad tone, "I felt like I was teasing them." He described how he was he was able to "turn no into yes," but the technology was so expensive that it would not be able to make a widespread impact for many years to come. For him, that simply doesn't cut it anymore - bold techno-utopian pronouncements by themselves are not enough.

To that end, his company announced yesterday that they are cutting all of their prices in half - with their product line now starting at just $500. Thanks to higher-than-anticipated demand, improved sourcing, and advancements in process as they've scaled up, Bender now feels completely comfortable calling his products affordable. He hopes to one day be able to print more of the leg with better materials and expand to other limbs as well. "The body is a very complicated thing to replace," he reflected as he laid out his plans to further blur the boundaries of fashion, technology, and medicine.

As for Ricks, he's increasing his involvement with UNYQ in an attempt to get this out to more people, saying that "he loves wearing the product." He feels more confident when he has his fairings on. It used to be that something as simple as putting on a pair of pants could be very frustrating. He would get insecure when it was windy, but now his legs are symmetrical. The product doesn't replace what he's lost, but it does give him dignity, control, and pride.

Ricks explained, the change is drastic, "I get stopped by people who tell me how great my fairings look. In eleven years of being an amputee, I've never had people tell me that my leg is badass. They are saying that my disability is really cool."

This article originally appeared on Forbes - Disruption and Democracy. Check out my upcoming book, Identified: How They Are Getting To Know Everything About Us 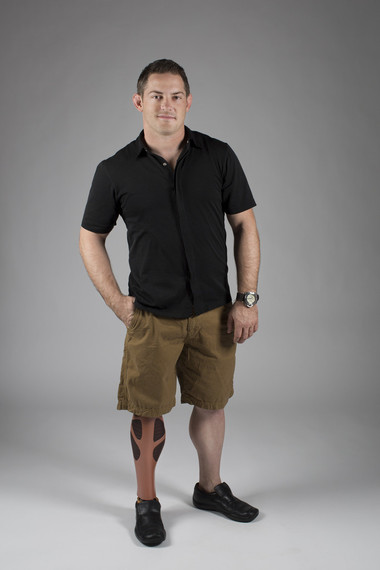 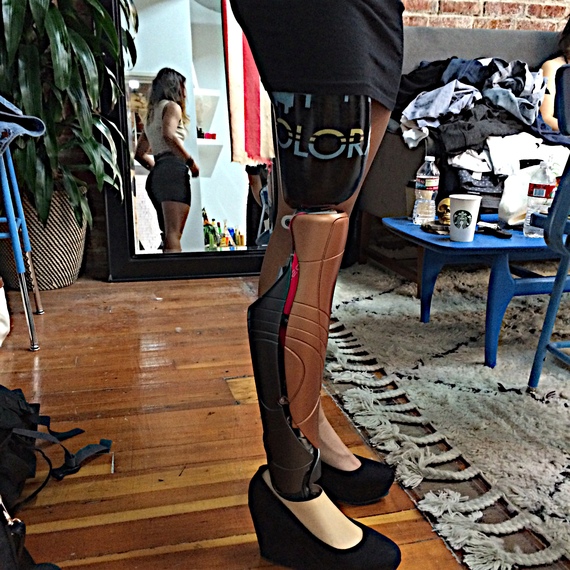