Egypt - Last week saw the launch of a website which has the potential to be far more explosive that any of the bombs which are regularly detonated in Cairo and Alexandria. Mwazna is the Arabic for "state budget" and it's the name of a new platform which lets citizens to monitor the income and spending of the Egyptian government.

What's happening with my money?

Thanks to its accessible visualizations, taxpayers and international creditors can understand what is happening to their money. They can see at a single glance that inflated bureaucracy, subsidies and interest payments on the exorbitantly high national debt together eat up 75 percent of the budget. The state provides subsidies for, amongst other things, gasoline, cooking gas and bread, as well as to fuel the enormous real estate bubble.

This means that new residential developments in the desert towns surrounding Cairo are being fueled by hand-outs and massive tax breaks, even though nobody wants to live in these satellite towns, with millions instead moving into informal (and illegal) settlements within the city.

Compare this with around 5 percent of the budget is directed towards the healthcare sector and only 3 percent towards youth programs -- despite the fact that more than half (57.2 percent) of the population is younger than 25. The Mwazna platform lets you plot developments on a timeline: you can see for instance how the burden of debt has more than tripled in the last four years, from 663 billion Egyptian Pounds in 2009-10 to 1.4 trillion (183bn US$) in 2013-14. 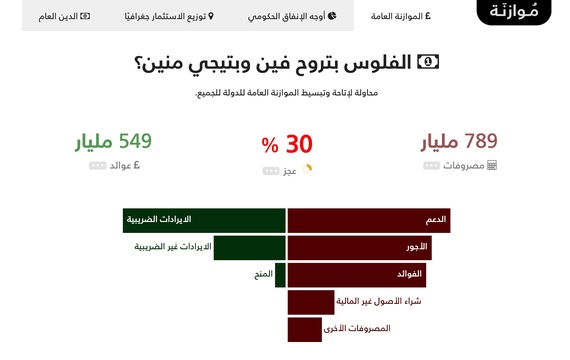 New transparency website Mwazna is currently available only in Arabic.

Bare facts can be one of the most powerful weapons against repressive political regimes. In states like China, Iran or Egypt, state-controlled media outlets dominate the public discourse. In this environment, publishing raw information is itself a very disruptive act. And the growth of digital media has given this kind of info-journalism an effective stage.

Back in 2010, a blogger exposed Al Ahram, a newspaper with close ties to the government, for faking a story: a photo showing the then-president Hosni Mubarak in the middle of a group of world leaders in the White House in Washington D.C. turned out to be doctored. An Egyptian blogger posted the original, in which President Obama was in the center. The photoshopping incident caused the paper a great deal of public humiliation.

In fact, today in Egypt there is a popular Facebook group which works to uncover hoaxes. It's called Da Begad -- meaning "is that real?" -- and it researches claims and stories in the media. More than 600,000 followers are mainly shown photos from Egyptian media outlets accompanied by their real sources. For instance, a photo taken in a football stadium, reportedly of the most recent violent protests, was in fact taken in Palestine.

He may be only 26 years old, but Amr Sobhy is a seasoned veteran of such spectacular fact-journalism. Immediately after the Egyptian presidential election in 2012, the former pharmacology student and a friend built the Morsimeter, a website to let the public track the election promises of the newly elected Mohammad Morsi of the Muslim Brotherhood, and whether or not they had been fulfilled. 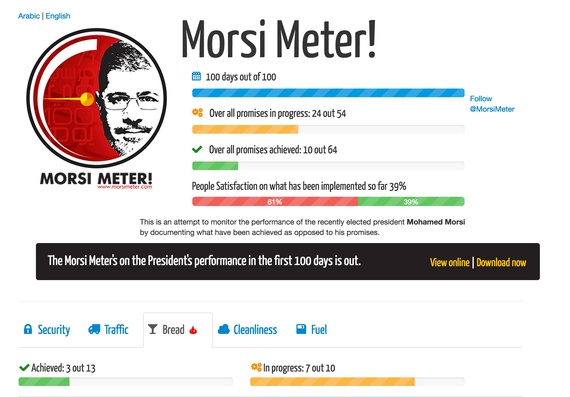 During the election campaign, Morsi had pledged 64 concrete reforms for his first 100 days in office, from improving the country's homeland security to reducing prices for gas and bread. Inspired by the Obamameter, these promises could now be tracked online.

"We work with a lean approach," Amr explains to me in a courtyard of the GrEEK Campus in Cairo. "I was traveling to the Social Media Forum in Bonn and within 24 hours I programmed the first version of the Morsimeter -- it was launched in the middle of the night at 1:30am."

The site soon went viral. Once political activist Wael Ghonim (made famous by his Facebook site We Are All Khaled Said) recommended the Morsimeter to his fans and followers, the server collapsed due to the volume of traffic. The story was covered nationally and internationally, from Germany's news bulletin to CNN. "For 100 days we were superstars," laughs Sobhy.

After this successful start, Sobhy began to ask himself which measures could genuinely act as indicators for political progress. At the same time, tens of thousands of users were using the platform to report positive and negative developments in their own lives, and he started to incorporate these reports into the measurements.

When CNN wanted to report about the Morsimeter, but the site only existed in Arabic, the activists appealed to their community -- "Guys, who can help us translate this into English?" It didn't take long before they'd crowdsourced an English version.

It wasn't Sobhy's first experience of using crowdsourcing. He and his colleague Abbas Ibrahim, who helped to found the Morsimeter, back when they were both teenagers, set up Zabatak. It was the first platform in Egypt where citizens could report on everyday problems such as car theft or dilapidated buildings. This experience taught them that it's difficult to sustain user-generated information if the participants can't see the direct benefit of contributing.

"Especially in developing countries where basically nothing works properly, a platform like that can only hold people's interest for a short time," Sobhy explains. "The thing is, crowdsourcing is built on the good intentions of people who, in many cases, get no direct benefit from handing over this information. I'm only going to be prepared to contribute long-term if I really get something out of it.

"A good illustration of this point in Egypt is the very popular traffic app Bey2ollack. Because I benefit every day from accurate reports about traffic jams and delays, I'm much more likely to also actively contribute information. The app solves an immediate personal problem, and so my motivation to participate is correspondingly high."

Maintain focus on political topics, rather than getting outraged about a new issue every day

Sobhy views the Morsimeter as a success because it was an important step in shifting the country's political culture. "Politics in Egypt is highly polarized and has a lot to do with emotion and identity. We want to counter these by putting facts and numbers on the table, and try to change people's voting behavior that way."

Instead of every day jumping on the latest scandal, which will be forgotten just as quickly, the Morsimeter is intended to help citizens to maintain focus on a topic. And this means politicians are truly held to account for their records. (The full report on the 100 days, complete with infographics, can be found here.)

Just as important was the fact that activists in other countries started to use the project's open source code to create their own accountability meters. The most successful imitation so far has been RouhaniMeter, which keeps tabs on Iran's president Rouhani.

The project is part of a global trend of so-called "sousveillance"; (a play on 'surveillance', which comes from the French for "watching from above"; 'sousveillance' means watching from beneath.) Whilst we read a lot about the digital age handing new levels of power to corporations and national security agencies, at the same time the internet allows citizens to keep a closer eye on their governments.

Public finances are increasingly often just that: public. British taxpayers can log on to Where Does My Money Go, whilst the Open Spending Platform publishes a growing number of available financial data from 73 countries. This allows very illuminating international comparisons, which prompt a positive kind of competition between countries as well as exchange of ideas.

This trend leads to a new kind of political culture online. Researcher of journalism Michael Schudson speaks of the "monitorial citizen": as our world gets ever more complex, making it totally impossible to know everything and make fully informed decisions, political participation is adapting and developing into digital observation and scrutiny -- and outcry when things are not right. Being an active citizen equates, according to Schudson, to always having one eye on politicians. In Mwazna, Egyptian citizens now have a new tool to help them do this.