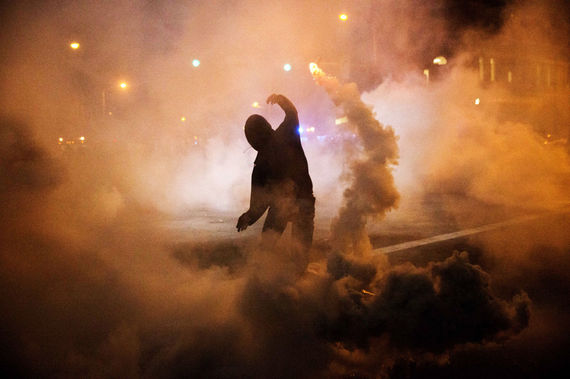 White conservatives have found an unlikely new icon to reference when spouting their ignorance on the web: Martin Luther King. In the past year or so, there has been a tendency for white people opposed to any outcry against police brutality and ongoing racial discrimination to invoke MLK's words about the content of character being the yardstick to judge a man instead of skin color. While those are indeed admirable words, conservatives interpret them into arguments for Black people to stop calling out the white supremacist status quo in America.

In the past week since Baltimore exploded, clandestine and outright racists who otherwise never have a good word to say about any Black person, have been all over social media saying things like: "If Martin Luther King were alive, he would not approve of rioting," or that the people of Baltimore are protesting in the wrong way, or that they're using the wrong sort of language, and that "Martin Luther King would never do that." While it's true that Martin Luther King was absolutely dedicated to nonviolence, a lot of the people who are using his words really have not studied his writings, and they obviously don't know any other speech of his besides "I Have a Dream."

Last December, I saw Selma. Not long after that, the annual MLK Day celebrations took place, and in Atlanta, that is always a major event. Both the film and the holiday rekindled my interest in Dr. King, and I was surprised by how militant a lot of his writing was.For MLK and others dedicated to it, the philosophy of nonviolence was not weakness or a surrender to white power; it was a moral crusade, designed to show the world the ugliness of white supremacy and segregation. While King always adhered to that tactic, he was also a relentless, withering critic of America's racist political, economic and social structure. Dr. King made some very powerful statements about the lack of education and opportunities in Black communities that sadly we still have to deal with today.

Dr. Martin Luther King was a Black radical. That fact gets overlooked by the people pulling his quotes out of context to denigrate the rioters in Baltimore and Ferguson. They are only using him for one reason; because to them, he represents a leader who kept Black people silent and submissive to police brutality and white racism without fighting back. Nothing could be further from the truth, and it's an insult to the man and his message.

Dr. King never condemned rioting without also condemning the system and conditions that created them. He famously said that, "A riot is the language of the unheard." If nothing else, the events in Baltimore have proven that the injustices and suffering in Black neighborhoods goes unheard by white America until they erupt.

I'm willing to bet that if he was alive, he would condemn those conditions today, and the same bigots using his legacy to attack present-day activists would disapprove of him just as much as they do the citizens of Ferguson and Baltimore now.