Evelyn Lauder, Senior Corporate Vice President of The Estee Lauder Companies and Founder and Chairman of The Breast Cancer Research Foundation, is passionately committed to the battle to defeat breast cancer. In 1989, Evelyn started the fundraising drive that established the Evelyn H. Lauder Breast Center at Memorial Sloan-Kettering Cancer Center in New York City, the first-ever breast and diagnostic center that has become a model for similar facilities around the world.

In October 1992, she and Alexandra Penney, then editor of Self magazine, developed the pink ribbon, which we all recognize as the worldwide symbol of breast health. In 1993, she turned her attention to helping the world's top medical and scientific researchers, and established The Breast Cancer Research Foundation as an independent, not-for-profit 501 (c)(3) organization dedicated to funding innovative clinical and genetic research.

Since then, The Breast Cancer Research Foundation has raised more than $180 million. Evelyn devotes much of her time and boundless energy to finding creative ways to raise money. She's even turned one of her hobbies, photography, into a potent weapon in the race to find a cure for breast cancer. As her latest exhibition, Flowers, closes in New York City and she gears up for another, she shares her story with us. -Willow Bay

My efforts to join the fight against breast cancer all began around the fact that women were getting short-changed in the medical arena. I noticed that when it came to breast cancer, women were dying at twice the rate of people dying from AIDS and no one was talking about it.

One of the things I am most proud of is bringing breast cancer out of the closet and encouraging editors to write about breast health. It was a taboo subject and once editors began writing about it, it really hit a nerve with their readers. The more knowledge there was about the disease, the more open women were in discussing it, and the better they are equipped to deal with a diagnosis. Women are no longer as terrified as they were in the early 90s. The whole attitude changed. This was also a tremendous incentive to physicians to upgrade their diagnostic tools and their research. It helped to change the attitude about funding research. Also, at that time, no one was doing coordinated research on a national level. Since then, the BCRF has raised more than $180 million.

This October, The Breast Cancer Research Foundation will be giving $32 million to 151 researchers.

Over the years, I have done a variety of things to raise funds. I have a creative yen for photography. The art dealer, Holly Solomon saw some of my photographs and offered to give me a show. I was so excited because it was an opportunity to raise money for the BCRF. And that got me started. Today everything is done in a top-notch, professional way. I have a curator who works with me on my exhibitions. We sell only limited editions of my work.

My Takashimaya show in New York City has been up for the last week. The store invited me to show Flowers, but they asked for small photos because they don't have a large gallery space. I went back into my archives and selected my favorite photographs for this exhibition, and then printed them in a smaller format. People really liked the smaller sizes because they're a little bit different. For example, they can mix them with books on their bookshelves. This show really brings people a lot of delight. 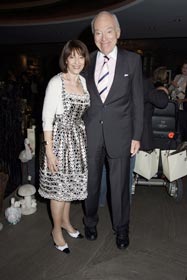 Evelyn with her husband Leonard at Takashimaya

Next, I'm going to have a show at the Rhona Hoffman Gallery in Chicago in November where I will add a lot of new work. It will feature some of my photos of antique head vases. These are pictures I took for myself just because I loved them so much. I've photographed diminutive lady head vases in such a way that light and shadow heighten the drama of their expressions - be it coy, forlorn or frightening. I've placed flowers from my garden in the vases and it appears as if the flowers are bursting from their hats, adding to the eccentric charm of these ladies. 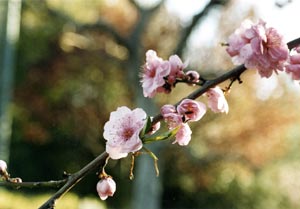 Larry Gagosian, the art dealer, saw my head vase photographs and told me he thought they were taken by a young artist. I said "Well, we can apply the Y word." And he gave me a show at his gallery in Beverly Hills last March. Next June, I am going to have a show in Paris at Galleries Lafayette. 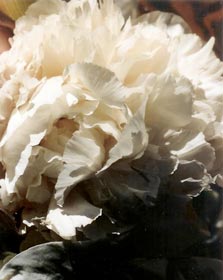 Taking photographs is a hobby, and having these exhibitions and raising money for BCRF, justifies the time I spend taking all these pictures. I'm using my passion to give back. These exhibitions also allow me to connect with friends and supporters and spread the word about our work. 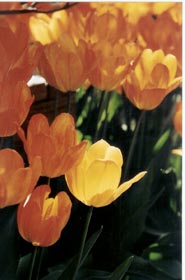 The gratification of helping others is a very American tradition and a Judeo-Christian tradition. Now it is great to see young people creating funds and giving back in all sorts of productive ways. It's a terrifically satisfying thing. Our fore-fathers had the right idea about this. Now we know there is science that backs this up. There is physical evidence of the body's response to doing good. Endorphins are released in the brain when you do something for someone else. Doing good really feels good.

For more on the Breast Cancer Research Foundation, visit www.bcrfcure.org.