You can only fight a war you believe in. Even if it isn't for ideals, it must be on some level worth your individualistic need and time. What if we could strive for peace using the same narrative?

What if we could all believe that working for peace somehow was worth our individualistic need and time?

I visited Israel and Palestine this past December (2015). I had the opportunity to meet with several dignitaries, one being Yossi Klein Halevi. Yossi is an amazing author who is genuinely trying to bridge the Jewish-Muslim divide. A line from his book 'At the Entrance to the Garden of Eden' struck a chord with me. It said:

'For peace: you must be willing to enter dangerous territories and have "courageous indifference to the judgment of your own communities", who are unwilling to make peace with the enemy.'

I chose to visit Israel and Palestine because I wanted to hear both sides of the dialogue. I sought to understand the lives of my Palestinian and Jewish friends close to home. Comprehend from peace negotiators and researchers the challenges and frustrations everyday people faced. I wanted to see firsthand how failed peace attempts affected the morale of humans living on either side. For a more selfish reason however, I really wanted to visit Jerusalem.

Jerusalem the holy city of Prophets and Kings. The city of crusades and spiritual & religious enlightenment, a place where most people see conflict, I was naïve enough to see a semblance of cultures, intermingling, becoming one.

What I loved the most about Jerusalem also happens to be the reason for all the conflict. Church bells going off right after the 'adhan' (the Muslim call to prayer), worshippers of three different faiths covering their heads, seeking peace in the divine, walking in devotion overcoming their fears. 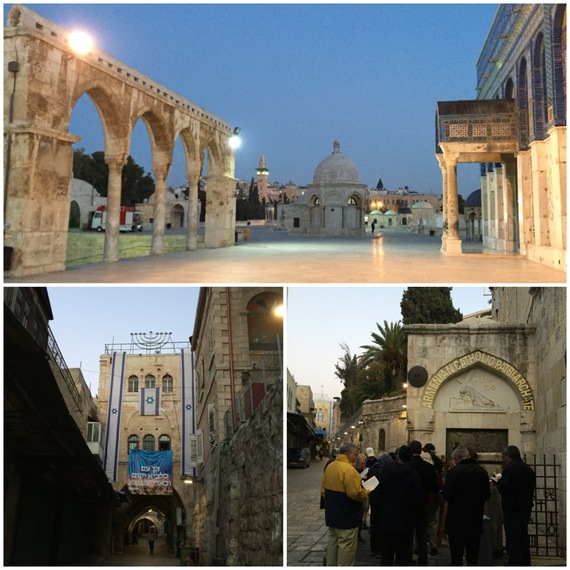 I met with Israeli Arabs, Arab Israelis, Christian Arabs, Jewish Arabs, and even Palestinian Israelis. Pretty much any multitude of combinations you can sum up. But mostly I met with every day people.

People who just wanted peace - kids who just sought brilliance through education, and folks who pursued spirituality. Individuals who went beyond their everyday difficulties of crossing checkpoints, braving knife attacks, and enduring aftermaths of missile attacks, to achieve some form of normalcy.

No matter your cause of who is right and wrong, no matter your reasoning of the discourse. No matter your side; looking at these relentless people striving towards normalcy, we must gather some form of hope.

We must realize that, as we foster our religious differences, we need to start focusing on religious commonalities. Considering that religion can be a medium for peace.

Understanding that it isn't about 'My religion' or 'Your religion', but rather it is 'HIS religion'.

For God has sent down His religion for all of humanity and with the sole purpose of upholding our duty towards good deeds.

"O mankind! We have created you from a male and a female, and made you into races and families so that you may know each other. The most honored of you in Allah's sight are those who best keep their duty." (Qur'an: 49:13)

Recognizing that these 'Three faiths' collide in 'One city' for 'One GOD'.

And realizing that it isn't about 'My land' or 'Your land', but rather, 'We are a part of this land', and will someday return to it.

"Every person has to have two pockets and in each pocket they have to carry a different note. And the note in one pocket says the universe was created for me. And in the other pocket the note says I am just dust and ashes." (Rabbi Jonathan Spira-Savett)