On April 24, 2013, Rana Plaza, an eight-story commercial building on the outskirts of Dhaka, Bangladesh, collapsed, killing 1,129 garment workers. The world watched in horror as thousands were pulled from the rubble. While the disaster marked the deadliest garment-factory accident in history, the greater tragedy was that much of the devastation was preventable. Cracks had been discovered in the building, but workers were ordered to stay; and managers constantly employed dangerous and unsafe practices. The structure itself was never approved to be built.

For a brief moment, Western consumers got to see the dark underbelly of the supply chains that make the products they use each day. The factories onsite at Rana Plaza were manufacturing apparel for household names such as Benetton, the Children's Place, Mango, Primark, and Walmart. With so much attention focused on what happened, the general public expected this event to be a turning point for the industry. But over two years later, the problems that caused the destruction still remain.

To Dr. Richard Appelbaum, this is no surprise - the continued failure of multinational companies to guarantee fair working conditions in their supply chain is a byproduct of their focus on "corporate social responsibility" (CSR) programs. As Research Professor and MacArthur Chair in Global and International Studies and Sociology at the University of California at Santa Barbara, he has spent decades inspecting conditions, studying the industry, and working to advance the rights of workers around the world. Globalization has only exacerbated the problems by creating a situation where retailers and brands source from supply chains that are globally distributed--and are constantly "moving production from factory to factory in search of the lowest possible costs." In this new model, brand-name firms focus on "product development, design, and marketing" while contracting out to manufacturing to poorer nations to compete on "lowest possible per-unit price, highest possible quality, and fastest possible delivery times."

Since the 1990s, CSR has been put forth as a form of private governance, where companies would take it upon themselves to monitor, investigate, and audit for labor standards enforcement. Even when they are created with the best of intentions, the reality is these efforts can only capture some of the abuses that workers face. The programs are ineffective in protecting unionization and free speech rights and are unable to exercise meaningful control over day-to-day managerial behavior. To proponents, CSR is a way to spread best practices and standardize quality; to critics, it's a public relations effort that weakens regulation. But as Dr. Appelbaum explains, the problem is more obvious than that. "The whole structure of inspections is a fox guarding the hen houses," every building in Bangladesh that collapsed was inspected in the weeks and months before.

The incident at Rana Plaza resulted in the creation of two contested agreements between activists and corporations, but neither appears to be particularly effective. Instead, the industry should focus their efforts on building the next-generation of solutions that focus on continuous monitoring and automatic feedback systems.

A manual inspection process will always be susceptible to deception and incompetence, especially when the parties involved are not working to aggressively root out problems. Scott Nova, executive director of the Worker Rights Consortium, points out that "inspections are completed by people the companies hire, not by independent bodies." The advantage of using technology is that can be addressed; if properly installed, it can allow for inspections remotely, at random, and by anybody allowed access to the data - without needing to physically be present.

Take for example the work done by LaborVoices, a California-based software-as-a-service company that is developing feedback systems for garment workers. According to COO Ari Olmos, the company is building a "Glassdoor for retail workers in developing countries" by allowing them to see ratings on factories and farms using basic mobile phones. The company partners with multinational corporations who want to start collecting data on their subcontractors. Their product creates an early warning system for problems, a grievance management system, and a way to benchmark working conditions. In participating factories, workers have a phone number they can call to anonymously report whether they are being paid on time and if they are being treated fairly. The company can follow up on complaints and track progress over time. They can also help to answer specific questions, such as "are fire exits unlocked at all times?"

What LaborVoices does is allow measurement of what could not be previously measured by creating data where data didn't exist before. By building a functional feedback loop, it makes it significantly harder to ignore practices and history. Olmos explains that their vision is to "give workers free access to a platform they can use to identify the best workplaces, while selling detailed analytics to companies that want more visibility into their supply chains and facilities." He sees future versions of the software as being able to handle photos and videos, deliver improved quality of survey questions with A/B testing, and offer more built-in options to customize based on need.

These might be temporary, stop-gap solutions to a deeply entrenched problem, but LaborVoices is not the only group working on the issue. Certain companies are taking this a step further, by using technology to assist workers in their day-to-day activities - for example, BMW is creating bespoke thermoplastic polyurethane thumb protectors for their factory workers. Others are working on ways of incentivizing behavior on top of these systems. Levi's is piloting a program where they offer cheaper short-term credit to companies that meet their safety levels.

While it's true that this would result in an initial upfront cost, the whole reason CSR programs were created to begin with was to obtain legitimacy and the appearance of good corporate citizenship. If consumers wanted fair supply chains to be a priority, they could let their shopping habits speak louder than their words. Technologically speaking, we are not far off from a point where price tags could also include a QR code that has a geotagged history of all the places the item has been. But shoppers are working with limited budget, attention span, and information. As Dr. Appelbaum rightly points out, "Most people around the world do not have the privilege of studying the deep-seated structural processes that shape their lives."

It's best then to treat this as an issue of regulation and business practices. In a world blanketed by surveillance cameras, there's no reason we should allow for sweatshops to go unnoticed. Any factory that makes something sold in nations that value human rights should be blanketed with sensors that assist in making working conditions better. The next major agreement on this issue should be focused on setting a minimum technological standard of conduct, as well as robust rules that allow NGOs and civic society to inspect, challenge, and contribute to the information being collected. If corporations are serious about making a positive contribution than they are in a much better position than governments to implement these tools to accomplish what they profess to believe in.

This article originally appeared on Forbes. 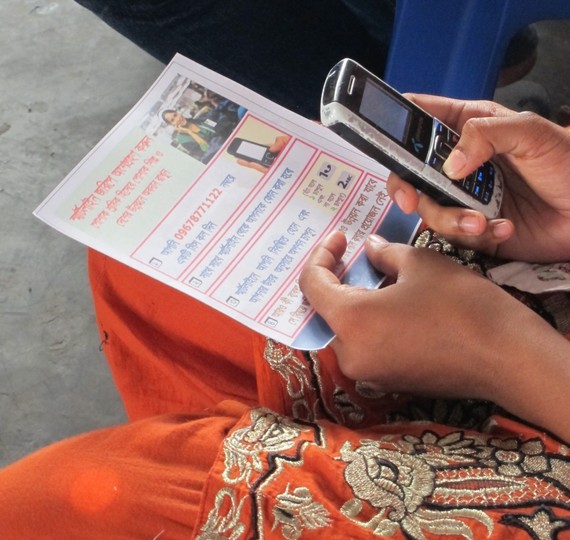 (Credit: LaborVoices) A garment worker in Bangladesh learns about the SmartLine during an orientation session in Dhaka.