The current troubles with Crimea, and the souring of the relations between the United States and Russia, has led to a series of actions by NATO countries sure to drive Russia's political reactions to ever more troubling extremes.

Could the International Space Station become another casualty?

Since 2011, NASA has relied on Russia to ferry astronauts and supplies to the International Space Station (ISS). This lone outpost of humanity has been continuously inhabited since Expedition 1 arrived in 2000. Because this operation runs so smoothly, you almost never hear about the ISS in the news. 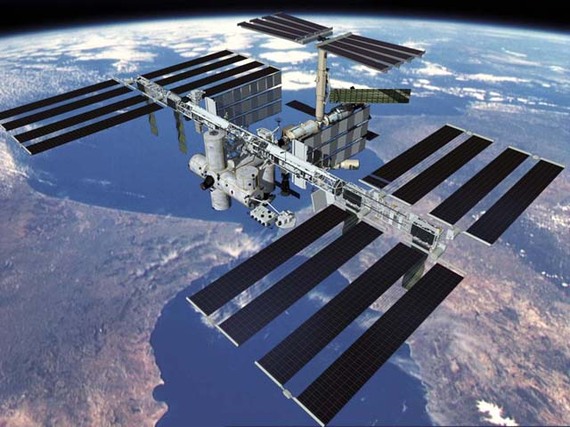 It was originally conceived as Space Station Freedom by NASA and the European Space Agency in 1984, but after the fall of the Soviet Union, in 1993 Russia joined the international community in constructing and supporting the ISS at a cost of over $100 billion. The Space Shuttle (Space Transportation System) became the chief means for assembling its components and bringing US astronauts to the Station.

On January 14, 2004, President George Bush gave his 'Vision for Space Exploration' speech in which the Space Shuttle program was cancelled in the wake of the Columbia accident. "...The Shuttle's chief purpose over the next several years will be to help finish assembly of the International Space Station. In 2010, the Space Shuttle -- after nearly 30 years of duty -- will be retired from service." Then a new program called the Crew Exploration Vehicle (CEV) would be developed and flight tested by 2014 as part of a larger Constellation program, which would transport astronauts to the moon and beyond. Following President Bush's speech, a week later, NASA Administrator Sean O'Keefe told the Senate Science Committee it would be a minimum four-year gap after the last Shuttle flight in 2011 where NASA would have to rely on Russia to ferry astronauts to the ISS by 2015.

A series of audits in 2008 and 2009 by the GAO concluded that the Constellation program "lacked a sound business case" because Ares I (CEV) was being built to fly astronauts to the ISS no earlier than 2017, but Ares-I would be funded by decommissioning the ISS in 2015. There would be no place for the Ares-I to go in 2017! So, President Obama proposed cancelling the Constellation program and using the money to accelerate the commercial cargo program begun by the Bush administration in 2004. Commercial companies like Space-X would receive contracts from NASA to begin commercial crew launches. The ISS would also not be cancelled until at least 2024. But the fate of the Shuttle was sealed.

Once the Space Shuttle program was mothballed beginning with the last flight of Atlantis (STS-135) on July 8, 2011, the US relied on the Russian space transportation program to bring astronauts to the Station. At the present time, the US pays Russia about $70 million per astronaut to travel to the ISS.

The ISS is supported by 15 nations and 5 space programs, but American and station partner astronauts are 100 percent dependent on Russia's three-seat Soyuz capsule and rocket for rides to the ISS. Supplies such as fresh water and food, meanwhile, are transported to the Station by the Russian Progress-M automatic transport system.

Almost as important as supplies and astronauts is the re-boost provided by the Progress-M vehicle after it docks. The ISS orbit near 260 miles is constantly losing altitude at a rate of about 1 mile per month. After delivering supplies to the ISS, Progress-M works in tandem with the European Automatic Transfer Vehicle (ATV) visits to boost the ISS to higher altitudes. If this process is interrupted for more than a few years the ISS would eventually burn up in the atmosphere.

The 2014 schedule for re-supply and crew transfers using Russian Soyuz and Progress-M spacecraft is: Soyuz flights on March 25, May, September, and November; and Progress-M flights on April 28, July 23, and October 29. There are also two manned flights scheduled and crewed for 2015 in March and May. Because of the rapid development of Space-X and Orbital Sciences Corporation's re-supply capabilities, the last Russian Progress-M mission will be October 29, 2014. After that, all re-supply missions to the ISS will be contracted out to US companies. In addition, Space-X and Boeing are rapidly developing the capability of transporting humans to the ISS and at least Space-X hopes to be certified to do so after 2016.

Meanwhile, in 2013 NASA announced its latest contract with the Russian Space Agency. The $424 million requested would support training and transportation for six astronauts in 2016 and the first half of 2017. But NASA Administrator Charles Bolden said, if Congress had simply approved the space agency's request for more funding for its commercial space effort, this contract would have been unnecessary. "Because the funding for the President's plan has been significantly reduced, we now won't be able to support American launches until 2017".

The good news is that during its 13 years of existence the ISS has weathered many international fire storms. In a recent Space.com article (March 24, 2014) Bolden said he was convinced the current US-Russia tensions will not affect this unique partnership. "I don't think it's an insignificant fact that we're starting to see a number of people with the idea that the International Space Station be nominated for the Nobel Peace Prize."

The bottom line is that Russia has no politically prestigious, manned space program without access to the ISS. They would probably not want to jeopardize access to, or damaging, this truly international platform!