The USS Monitor's short but noteworthy life of service began and ended in 1862, with December 31, 2012 marking the 150th anniversary of its demise. Over the course of this past year, I've been telling the stories of some of the 16 heroic Union sailors who went down with the Civil War ironclad on that stormy night off the coast of North Carolina.

In particular, I've been dwelling on those who are most likely to have been the two men whose skeletons were recovered in the turret when the Monitor was brought up from the ocean floor in 2002. Efforts have been underway to determine which two of the 16 they were, but no identifications have been announced yet. Even so, for anyone who's delved into this history mystery, it's quite clear that one of the sailors is either Robert Williams or William Bryan.

Robert Williams from Wales
One of the skeletons was an individual estimated to have been in his 30s at the time of his death. The maritime life being mostly a young man's pursuit at the time, only four of those lost were that "elderly." For various reasons, it's fairly easy to rule out two of these candidates (see this previous article if you're curious about the process of elimination), leaving just Robert Williams and William Bryan.

As it happens, both men can be seen in this well known photo of the crew on the Monitor's deck. Williams is the swarthy looking fellow with the moustache and crossed arms on the far right (red arrow), while Bryan is one of the checker-players near the front (blue arrow). 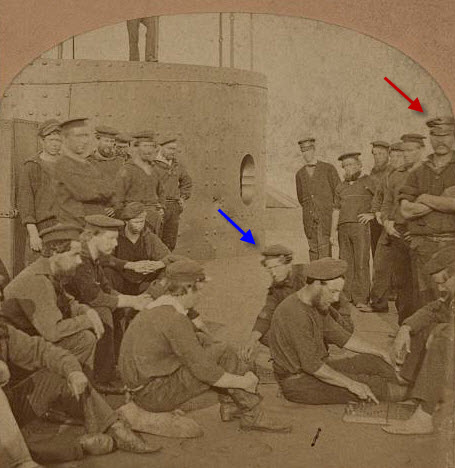 Though both Williams and Bryan match the skeletal characteristics quite well, Williams should probably be given the edge based on the wear and tear evidenced in the remains, if only because he was a career sailor known to be a bit of a brawler. One would expect his skeleton to reflect that history. Isotopic testing done some years ago also favored him since it pointed to a European birth and Bryan was originally thought to have been from New York. But now we know that Bryan was Scottish and had also been serving in the U.S. Navy for at least seven years.

Under ideal circumstances, living relatives of both Williams and Bryan could provide DNA reference samples to compare against the remains to make the final assessment, but the obstacle is Williams' name. I've never understood why Wales, which prides itself on tongue-breaking town names along the lines of Llanfairfechan, Pwllheli and Ystradgynlais, should restrict itself to so few surnames that almost one in four is a Jones or Williams.

We know that Robert Williams was born in Wales around 1829-1832, but with roughly one in 10 of his countrymen sporting the same surname, he doesn't exactly stand out among Welsh immigrants of the time. The reality is that it's virtually impossible to pluck out the correct Robert Williams because there are too many of the same name, age and origin. But Bryan's family has been traced, and because there are only two candidates, DNA testing his relatives will either point to him -- or not. And if not, it's Williams.

William Bryan from Scotland
As mentioned above, William Bryan was once thought to have been a New Yorker, but a search of previous enlistments revealed that he was actually Scottish. This was corroborated by family letters such as the one seen here (transcribed and typed by a relative in 1927) which Bryan wrote to his parents from the Monitor while situated on the James River in Virginia in August of 1862. 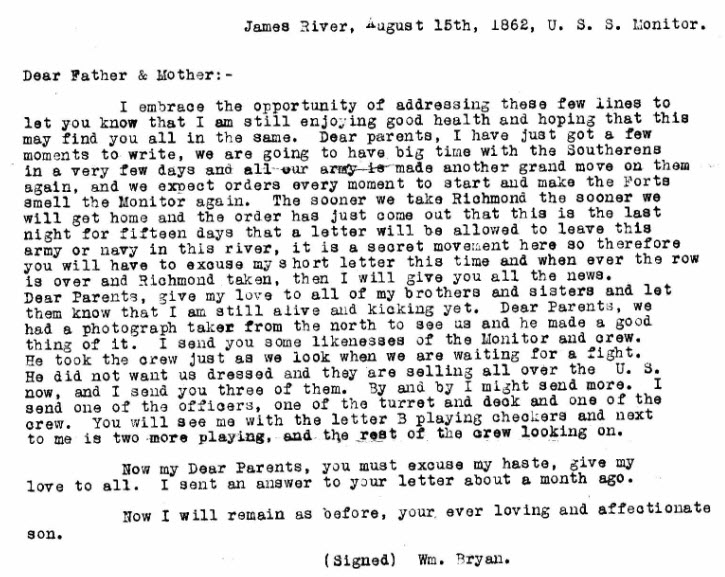 August 15, 1862 letter from William Bryan of the USS Monitor to his parents in Scotland

It's thanks to this letter that we can zero in on Bryan in the photo above of the crew members, and remarks such as, "We are going to have a big time with the Southerners in a very few days... and we expect orders every moment to start and make the Forts smell the Monitor again," give us a sense that he genuinely enjoyed his profession and was spoiling for a fight.

Knowing that his death was lurking just four-and-a-half months in the distance makes his request to his parents to "give my love to all of my brothers and sisters and let them know that I am still alive and kicking yet" somewhat poignant. What makes it even more wince-inducing is the fact that one of his brothers was, in fact, serving for the Confederacy.

A couple of years earlier in October of 1860, this brother, James, then living in Georgia, wrote to their parents in Dunbartonshire of a chance meeting with William and his apparent restlessness:

My brother William has left here to gone (sic) to N. York... the last vessel he was on was a man of war I believe for 3 years, he told me he thought of taking a trip home to see you all this year ... I thought he had remained here he might have done better than following the seas but he did not seem to be satisfied.

Sadly, though a family man and more settled than William, James would also answer the call of duty only to lose his own life not long after his brother. His wife was so disheartened that she returned to Scotland with their children, where she no doubt commiserated with her in-laws who had lost two of their sons on opposite sides of a civil war being fought across the Atlantic.

But the family not only survived, but flourished, which is why there are living relatives to DNA test. So it is the Bryans who will provide the tie-breaker. Is the older of the two skeletons in the turret Robert Williams or William Bryan? I'm leaning toward Williams, but open to being wrong. Either way, they're both foreign-born American heroes.