We are rapidly approaching the 150th anniversary of the short life of the USS Monitor, the revolutionary ironclad that fascinated our Civil War era ancestors and continues to captivate many today. Launched in Brooklyn on January 30, 1862 and lost in a storm off Cape Hatteras on December 31st of the same year, its legacy has far outlasted its duration. History buffs can visit the USS Monitor Center nestled with the Mariners' Museum in Newport News, Virginia to learn about its design and construction, naval history, and life on board.

This is exactly what I did, but as a genealogist, I was primarily interested in the people involved -- and even more specifically, the 16 men who lost their lives when the Monitor foundered. I explored the museum and snagged the latest book, The Monitor Boys, and while both were undoubtedly engaging, neither placed much emphasis on the 16 who intrigued me.

My curiosity about these sailors was sparked back in late 2005 when BBC contacted me about a Timewatch documentary. Several years prior, the Monitor had been raised from the ocean floor, leading to the discovery of two skeletons in the turret. Somehow the BBC folks had learned about my work with the U.S. Army tracing families of soldiers who are unaccounted for from past conflicts. In this capacity, I locate the soldiers' closest living relatives, as well as selected family members who can potentially provide DNA reference samples to help identify remains. BBC hoped I could do the same for the sailors who had gone down with the Monitor back in 1862.

Never one to resist a history mystery, I jumped into the task, but with little more than a month before filming began, my research window was limited. The producers soon narrowed the original list of 16 down to six based on isotopic testing that had been done on the remains. They explained to me that oxygen gets incorporated into drinking water, making it possible to map the distribution of isotopes around the world. As an individual's teeth complete their formation by age 12-14 or so, they essentially lock in the isotopic information for the area where that person grew up. With the two skeletons found in the turret, scientists were apparently getting Northern European oxygen isotope values, so I was told to focus on the six candidates who had been born in Europe.

According to enlistment records, this meant my attention was now centered on William Allen, William Egan, James Fenwick, George Frederickson, Thomas Joice and Robert Williams. I felt somewhat handicapped by the tight schedule, but did what I could. Before long, we all found ourselves drawn to the unfortunate Scottish immigrant, James Fenwick, who I discovered had wound up in America by virtue of a previous shipwreck. I picked up the trail of his family -- not easy back in the dark ages of 2005 before certain handy databases existed -- and found a good-natured great-niece who obligingly swabbed for history's sake. Fenwick was featured in the resulting Timewatch documentary and I've devoted a chapter to this sleuthing and the outcome in my forthcoming book, Hey, America, Your Roots Are Showing.

Fast forward to 2011. With the approaching 150th anniversary, I was curious what else had been discovered about the 16 sailors and two skeletons. The answer, it turns out, was not much more than what we knew before, so I decided to do a little poking around. And Veterans Day seemed an appropriate time to share a theory that's emerged about the skeletons of men who made the ultimate sacrifice.

Not being a scientist, I can't vouch for the accuracy of isotopic testing, but if it's true that both men originated in Europe, I think it might be necessary to add one more to the list of candidates: William Bryan.

Bryan had been discounted back in 2005 because his enlistment record indicated that he was born in New York, but I tripped across claims by alleged family members that would place his birth in Scotland. I'm not entirely convinced because records pertaining to the William Bryan in this particular family indicate that he was born in 1833, whereas the man who served on the Monitor was born a couple of years earlier circa 1830-1831. But then again, it's necessary to leave a margin for error in older records, so it could conceivably be the same man.

So I dug a little deeper and found earlier enlistment records for a William Bryan who was born in Scotland instead of New York. William Bryan isn't the rarest of names, so could they all be the same man? The newly consulted records are for a fellow who was born circa 1829-1830 in Scotland, but I suppose what caught my eye was the consistency in the physical description. All had blue eyes and were exactly 5'7¾" tall, and one of them also mentioned auburn hair. 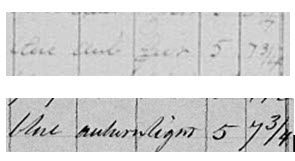 William Bryan had lived in New York and there's at least one city directory listing for a seaman named William Bryan in New York City in the late 1850s. Could it be that his last enlistment -- the one that would eventually lead him to the Monitor -- mistakenly recorded his residence as his place of birth?

I think it's at least possible, so would definitely add William Bryan to the list of candidates. Fortunately, since 2005, there have been advancements in DNA testing of older remains providing more options for possible identification. At the time, mtDNA (which is passed maternally) was the only alternative, but now Y-DNA (which is passed paternally) can also be used. This translates into more possible relatives to test, as well as multiple ways to test a single individual to be even more certain of an eventual identification. And if the people claiming to be related to William Bryan truly are, the research has already been done!