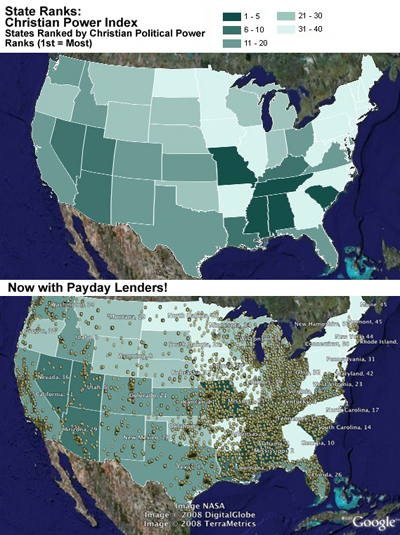 For decades now, I have been struck with a glaring inconsistency (some would call it hypocrisy) in the "pro-family," "pro-life" stances of so many self-defined conservative politicians.

They are against abortion and for "family values," but guess what. After the child is born, and the cohesiveness of individual families is threatened by the economic greed and fine print of corporations and financial institutions, then it is that too many of these same politicians refuse to pass laws that would help these people.

One glaring example presents itself in this overlay map from The Consumerist website.

The study is summarized by Barry Scholl, who writes this on the page I just linked you to:

"We started this project hoping to find out more about the spatial location of payday lenders and were surprised when a pattern reflecting a correlation with the American Bible Belt and Mormon Mountain West emerged," said Peterson, who conducted the research and coauthored the article with "The natural hypothesis would be to assume that given Biblical condemnation of usury there would be aggressive regulation and less demand for payday loans in these states, but ironically, the numbers show the opposite is true. It's sad that states with a pious and honorable religious heritage now disproportionately host predatory lenders."

It seems as though the states with the weakest, or non-existent laws against the type of usury often offered by predatory payday loan lenders are also among the most traditionally- and let's call a "spade a spade" Christian conservative/Mormon conservative, church attending, conservative-voting pious. In fact, if you look at these two maps, you will see a high degree of correlation between piety and states where payday loan usury is statutorily tolerated.

In my mind, when a family in an economic rough patch has to pay 500% interest on a payday loan, or gets foreclosed upon, that creates threats to marriage far, far more than any two guys getting hitched at the county courthouse does. In fact the latter presents no threat at all.

Why is this? Is it because so many conservative politicians are really more motivated by corporate donors than the Bible they profess adherence to?

A Bible that, incidentally, that says: