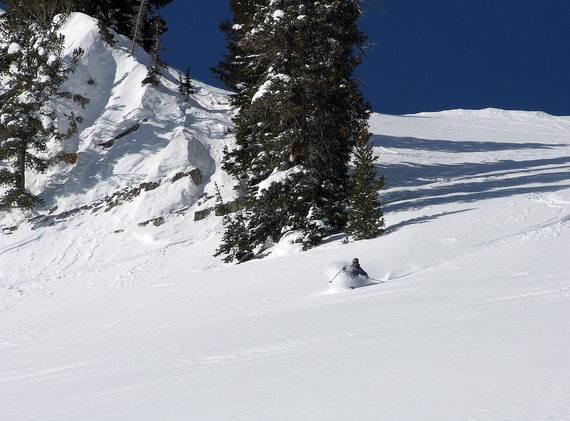 "You're gonna love skiing in Utah on a Sunday morning because all the Mormons are in church," jokes the Ogden hotel clerk as my brother and I check out at dawn. We're bound for Solitude Resort, the last stop on our attempt to ski five of Utah's top resorts in five days.

Anywhere else than possibly the Alps, this would be next to impossible. But because eleven of Utah's biggest and best hills are within about an hour's drive of Salt Lake City International Airport, five in five is not only doable, but logistically easy.

For Canadians accustomed to driving long distances to get our fresh powder fix, being able to access so many world-class resorts so easily also feels akin to a New York baseball fan scoring tickets to a subway series. Where else in North America offers so much downhill variety within such easy reach? Even British Columbia's legendary Powder Highway - a 680-mile span connecting eight alpine resorts, nine heli-ski operators and 16 snow cat outfits - can't compare for sheer convenience.

We've also heard persistent rumors that Utah's audacious advertising slogan -- 'The Greatest snow on Earth' -- isn't just marketing hype. In fact, winter storms suck up moisture as they pass over the heavily salinated Great Salt Lake. Then they dump over five hundred inches of fluffy, light, super dry powder every season on the nearby Wasatch Mountains, creating some of the best skiing and snowboarding conditions in the world. So off we go for five days of alpine adventure in Utah, hitting Alta, Snowbird, Snowbasin, Powder Mountain and Solitude back to back, and top to bottom.

Twin peaks
After a short two hour flight from Vancouver we drive thirty five minutes from Salt Lake City Airport to the adjacent resorts of Alta and Snowbird. This legendary pair comprise the real soul of Utah skiing.

Opened in 1938, Alta is the second oldest ski area in the American West and remains one of the few resorts left that doesn't allow snowboarders. Known for its challenging steeps and tree skiing, Alta is a true powder hound's mountain, with plenty of that light dry Wasatch powder to go around. Since 2002 it has been connected to steeper and more technical Snowbird via the lifts, making their combined 26 lifts and 4,700 acres of spectacular terrain one of the largest ski areas in the US. It snows heavily while we're there, making exploring this iconic downhill doubleheader even more challenging in often near white out conditions.

Mount Olympics
Next up, it's on to another one of the oldest ski resorts in the U.S. But also surprisingly one of its least known, despite its Olympic pedigree. Opened in 1939, Snowbasin has never had the name recognition enjoyed by more popular resorts like Vail or Aspen, even after hosting the 2002 Olympics Downhill, Super-G and Combined races. This relative anonymity might have something to do with Snowbasin's lack of on-mountain accommodation.

What Snowbasin is known for are abundant fresh powder fields days after a storm, and over 900 vertical meters of high alpine bowls, steep chutes, perfectly groomed cruisers and deep-powder glades. We get to enjoy all of that, plus two of the world's most challenging downhill race courses - the Grizzly and Wildflower Downhill runs made famous at the 2002 Olympics.

Where the locals go
Our fourth destination is so low on the radar that it remains relatively 'undiscovered' despite having more ski-able terrain (7,000 acres) than any other ski resort in in the USA. That's right, Powder Mountain, or Pow Mow for short, could very well be the largest resort that nobody outside of its home state has ever heard of. That has a lot to do with the fact that this quintessential 'locals' mountain doesn't advertise much, has no artificial snow-making equipment, and operates only four chairlifts.

What Powder Mountain lacks in sophistication it more than makes up for in both no-frills old school atmosphere and wide open powder runs. And while it doesn't anywhere near match the caliber of the steeps we discover at Alta, Snowbird and Snowbasin, Powder Mountain does offer cheap snow cat rides to access some sweet high alpine terrain, making our day here almost feel like a back-country experience.

Sweet Solitude
Our final stop turns out to be the sweetest. Just as our hotel clerk had predicted, Solitude on the Sabbath is virtually empty, even on what turns out to be a perfect bluebird day. We have its 1,200 acres of powder-dusted terrain pretty much to ourselves until early afternoon.

Tucked into the Big Cottonwood Canyon of the Wasatch Mountains thirty miles southeast of Salt Lake City, uncrowded, laid-back Solitude more than lives up to its name, regardless of the day. Perhaps the only reason it isn't completely swamped is its proximity to several more famous hills lining the neighboring valley. And so Solitude remains one of those 'undiscovered' gems you fantasize about stumbling across, a steep and deep mountain you can't wait to tell your friends about - especially if they're Mormons.

With so many mountains within such easy reach, base camp options abound on a Utah ski trip. We split our week between the massive Cliff Lodge at the base of Snowbird and a comfy room at the Summit Hotel and Conference Center in downtown Ogden, convenient for Snowbasin and Powder Mountain. We hit Solitude en route to Salt Lake City International Airport on our final day. For up to date info on snow conditions, resort accommodations, special ski vacation packages and more, visit Ski Utah.