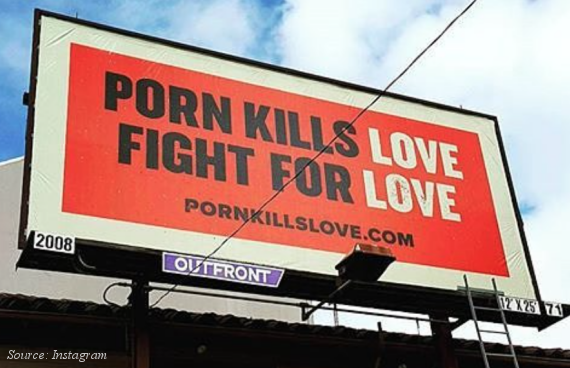 Late last year, a Utah-based anti-pornography organization called Fight the New Drug started erecting billboards in the San Francisco area emblazoned with the slogan "PORN KILLS LOVE. FIGHT FOR LOVE." The group's stated mission is to "raise awareness on the harmful effects of pornography." It cites "science and facts [to show that] pornography has negative neurological effects, is damaging to relationships, and is impacting our society as a whole." And now, after months of lobbying by FTND and other anti-porn groups, Utah Gov. Gary Herbert has signed a resolution that declares pornography a "public health crisis." The legislation and FTND's philosophy are based on the premise that pornography is addictive.

Here's the thing, though: it isn't.

The Daily Beast's Samantha Allen, who holds a Ph.D. in Sexuality Studies from Emory University, conducted a thorough investigation of the sources cited in Fight the New Drug's 2016 Reference Guide. In short, the science doesn't hold water. "Much of the literature is general information about dopamine and addiction stitched together into faulty syllogisms," says Allen. "Citations from peer-reviewed journals are mixed in with quotes from popular anti-porn tomes like Pornified and Big Porn Inc." Utah's S.C.R. 9, which State Sen. Todd Weiler (R–Salt Lake) introduced earlier this year, is supported by many of the same questionable sources cited in FTND's guide.

Another 2015 study published in Psychology of Addictive Behaviors found that believing oneself to be addicted to pornography could be the real public health threat. "Perceived addiction to Internet pornography likely contributes to the experience of psychological distress for some individuals," the study's authors concluded. "Although concerns about links between pornography use and psychological distress may be warranted, these concerns would be better focused on individuals' attitudes toward their own use, rather than on the use itself."

In addition to quoting pseudoscientific studies, the Utah resolution uses moralistic language, referring to pornography as an "epidemic" that "shape[s] deviant sexual arousal" and "perpetuates a sexually toxic environment." This is perhaps not surprising, as many of the supporters of the law (including both Sen. Weiler and the leadership of FTND) are linked to either the Mormon Church -- the same religious organization that fought to pass California's anti-equality Proposition 8 in 2008 -- or Mormon-run Brigham Young University. Elder Jeffrey Holland of the Mormon-backed Utah Coalition Against Pornography, which lobbied for the bill, highlighted the moral argument at a recent conference sponsored by the group. "If this moral plague could catch our imagination the way a medical epidemic does," Holland said, "we would be calling out every available member of the health care industry."

When Sen. Weiler first introduced his "Concurrent Resolution on the Public Health Crisis" on January 29 -- which became law on March 29, although Gov. Herbert held a ceremonial signing on April 19 -- Martha Kempner of Rewire magazine published an article about the rise of the anti-pornography faction in Utah and its religious and moralistic underpinnings. The piece explains how pornography is not any more inherently addictive than, say, chocolate, which triggers the same brain-based reward response. And yet no one is attempting to moralize or prohibit chocolate.

S.C.R. 9 claims that "exposure to pornography often serves as childrens' and youths' sex education and shapes their sexual templates." In this respect, I agree with the resolution. Considering the dearth of comprehensive sex education in this country, not to mention an enduring stigma against having frank discussions about sex, I'm not at all surprised that many young adults turn to pornography as a guide to sexual relations. In tandem with a large number of my adult film industry colleagues, however, I see this as an opportunity, rather than a point of concern. Many of us promote safer sex practices in our films not just to protect ourselves and our fellow actors, but also to set a good example for others. Almost all studios are clear about their commitment to regular STD screening. And many performers actively engage in health education by voicing their support for safer sex on social media, speaking at conferences, or lobbying for safer sex practices within the industry. This outreach works. For example, I once enlightened a teen who originally thought that AIDS could be cured by taking a single pill. Porn stars' visibility, combined with a commitment to education, is a powerful tool for positive change, not the unilaterally destructive force condemned by the Utah law.

Pornography is not inherently addictive. In fact, new scientific evidence touts the benefits of pornography consumption, with one study even linking the availability of sexually explicit material to a lower incidence of sex-related crimes. The state of Utah and organizations like Fight the New Drug would be better served by helping people with actual addictions, instead of attempting to instill guilt and fear in an effort to promote their own moral agenda.