Dining utensils seem like they should be pretty straightforward. What's more simple than a knife and fork? Okay, maybe a spoon. But like many things in life, there's more to utensils than meets the eye. In fact, these daily instruments carry a lot more weight than just the food you're shoveling. They're symbolic tools that can signal when you're finished with a meal or if you're still working; they can disclose where you're from, depending on how you hold them; and they can even cause hashtag-inducing media meltdowns (read: Forkgate, when Mayor of New York Bill DeBlasio ate pizza with a fork and knife.)

If you're not privy to proper utensil etiquette, it's time to study up, lest you accidentally initiate a spoon-apocolypse of your own. Customs vary across the globe. For example, in Thailand and Laos, it's impolite to put your fork in your mouth. You should use your fork to shovel food into your spoon, and then put the spoon in your mouth. In Chile, you should always, in all instances, eat with a utensil and never eat with your hands.

Here in the U.S., not much is taboo -- we can put all of our utensils in our mouths, and yes, we can eat with our hands. (How else would we get down with chicken wings?) The way we rest our fork and knife on our plates, however, is of utmost importance. If you're not up to speed already, here's what you need to know:

According to etiquette and personal branding expert Mindy Lockard, the way to signal that you're resting, -- meaning you haven't finished eating -- is to lay your fork and knife separate but parallel on your plate. Your knife should be on the right side of your plate, and your fork tines should be facing up. An alternative signal for "resting" is placing the knife and fork in an X on your plate.

To signal that you're finished eating, your fork and knife should be left together and parallel, at the 11 o'clock position, fork tines still up.

For a visual guide and for more dining etiquette beyond the knife and fork, check out the infographic below. Click on the image for a closer look. 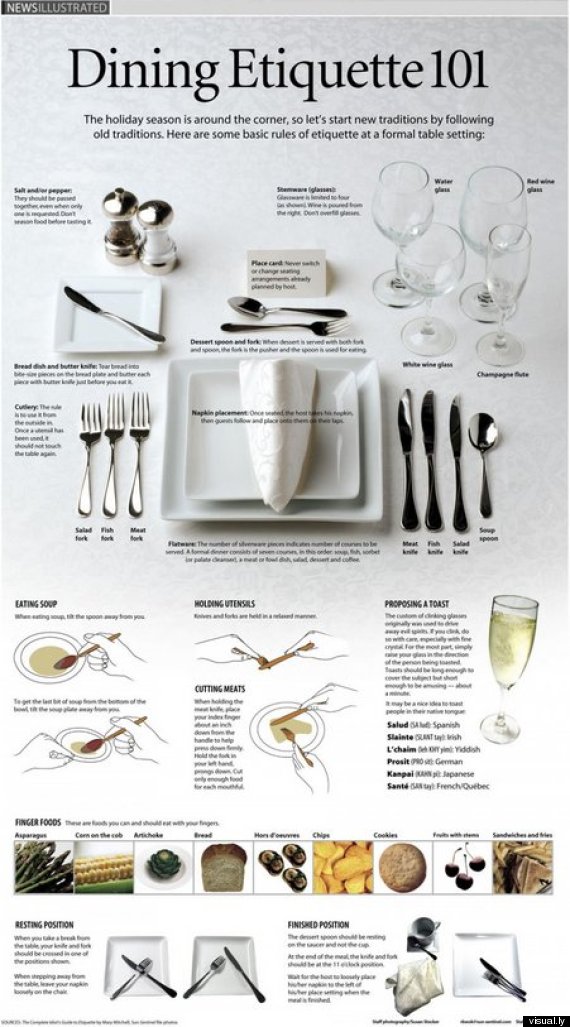 Correction: An earlier version of this post failed to point out that there are multiple ways to signal that a diner is "resting." You can either leave your fork and knife parallel and separate, or in an X.

International Cuisines We're Missing Out On In The U.S.