Most people have something about their lives they would like to be different. But when Peter Goldstein entered his late 20s, he had a realization that went far beyond a wish for small improvements. He felt a yearning for something more. Not more money, or more success in the traditional sense, but a radical reshaping of his life that would affect everything from the nature of his relationships to the way he experienced time.

Up to that point, Goldstein’s path had looked much like that of any educated, middle-class millennial. He grew up in suburban Massachusetts, went to Brown University, and fell in with what he lovingly called “a tight-knit community of nerds.” After graduation, he took a job with a small biotech company.

But with each passing year, Goldstein, now 27, felt growing unease that his chances for the kind of spontaneous social interactions that mattered so much to him in high school and college were drying up. There was no more hanging out in the common kitchen and talking for hours about school and life, or quickly rounding up a group to head out for the night.

So Goldstein began researching so-called intentional communities -- an umbrella term encompassing everything from student co-ops to hippie communes -- and “stumbled into” the idea of co-housing developments, he told The Huffington Post.

Immediately, he began proselytizing (“I got my nice reputation as the ‘co-housing’ guy,” he laughed). A few friends expressed interest and joined Goldstein in planning their own community -- a cluster of smallish homes on a parcel of land north of Boston where men, women and children would share common spaces. A place where they could gather without comparing day planners, wrangling babysitters and getting in the car.

For Goldstein, and others like him, intentional communities can be the antidote to a prevailing model of society that they find constraining or unfulfilling -- a model that presents marriage, a house, 2.5 kids and a prosperous career as hallmarks of a fruitful adulthood.

“When I look back on parts of my life when I have felt fulfilled, or where I’ve produced the most positive memories, they have always been times when I’m involved in some kind of tight-knit community,” Goldstein said,

Intentional communities -- groups that live together based on explicit common values, whether spiritual, ecological, social or a combination -- have been around for centuries. In the United States, there have been several peaks.

“The golden age people think about is really from the 1830s to the Civil War,” said Carl Guarneri, a professor of history at Saint Mary’s College of California who researches utopian communities. “That’s the time when there was the most groups, and the most publicity given to these groups -- both secular and religious.” The Shakers, for example, had 19 communal villages throughout the U.S. by the 1840s.

“I’m stereotyping grossly here, but I would say for the most part, that group was interested in, ‘Okay, we don’t like mainstream conservative values … too authoritative, too hierarchic -- we’re rebelling against that,” said Laird Schaub, executive secretary for the Fellowship for Intentional Community, an organization that serves as a clearinghouse for information in North America.

“A lot of those groups didn’t last very long,” Schaub added. “Knowing what you don’t like doesn’t give you a prescription for what will work.”

But some of the groups born out of that larger cultural moment did survive, becoming "mother trees" for a rise in interest again around 1990, Schaub said.

These days, the insular nature of intentional communities makes it difficult to pinpoint exactly how many there are. Many dissolve over time. But according to Schaub, the last few decades have seen a resurgence. The fellowship’s first directory, which came out in 1990, listed roughly 325 communities in the U.S. The most recent edition, released in 2010, included approximately 1,055.

Schaub cautioned against attaching too much significance to that increase, saying some groups have built trust in the fellowship and are more eager to list. He guessed there may be as many as twice the number listed in the directory. Groups range in size from a handful of members to hundreds, and each sets its own rules for who can join. Many require potential members to visit for several weeks, and then collectively decide whether the person or family is a good fit.

“Even if you have a values match, it doesn’t mean you’re going to actually like the people,” Schaub said. 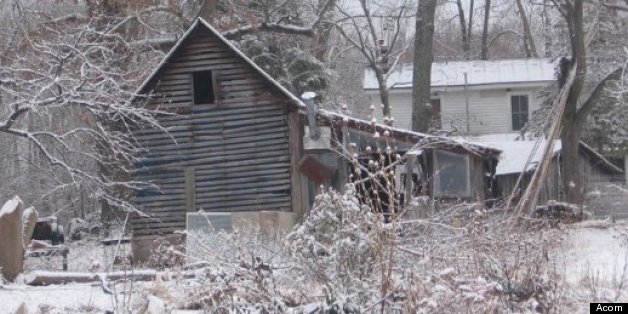 Acorn, an egalitarian community with an heirloom and organic seed business, under snow.

The word “utopia” is frequently attached to the idea of living in a planned community, but it’s a term that people actually living in such communities largely avoid.

“Utopia is very loaded word,” said Guarneri. “It’s a pun on a Greek word -- it means some place good, but also no place. So it’s really an imaginary construct, sort of a thought experiment, and it’s unfair to give a community a label like that. It’s an easy slam to say that ‘Oh, well, that isn’t a utopia.’”

Still, some communities do explicitly aim to offer themselves as models for society at large.

“There are tremendous problems with mainstream culture,” said Paxus Calta, 56, who lives at Twin Oaks, an income-sharing commune in rural Virginia established in the 1960s. Before moving there 15 years ago, Calta was a political organizer in Eastern Europe, working for the anti-nuclear movement, but was drawn to the idea of doing something more positive.

“I wanted to move beyond the oppositional politics,” Calta said. “Instead of saying ‘no’ all the time, I wanted to say ‘yes’ to things. I wanted to be involved in projects where we could say, ‘If the world did this more, then the world gets better.’”

And a better world, according to those living at Twin Oaks, means worrying less about money and thinking more about living in a cooperative, environmentally sustainable way.

Together, its members -- roughly 90 adults and 15 children -- own 450 acres of land, two dozen buildings, food gardens and several businesses, where they make and sell hammocks, tofu and seeds. The commune provides its members with basics, like food, shelter, and health care. They have access to 17 shared vehicles, used on a “trooper system”: Every day, a community member leaves by 9 a.m. to run errands and is back by 1 p.m.

“If you give them a slip of paper indicating what it is you want, they will go buy it for you, they will do the accounting, they will put it in your refrigerator,” Calta said. “Whatever is necessary.”

There’s no need to say “thank you,” because it’s not a favor, it’s just how things are done. In an attic (described in one Twin Oaks newsletter as "somewhere between a free clothing shop and a very large closet"), the group keeps a selection of regularly restocked clothing for members’ use. No one ever receives a bill. And everyone’s taxes are handled by the commune’s accountants.

A big part of the appeal of Twin Oaks and similar communities is a redefined relationship with money, and a sense of liberation from a life in which money plays a large part. Everyone at Twin Oaks gets an allowance of about $2 a day. By minimizing the influence of money, members hope to maximize their relationship with another element: time.

In America, adults tend to spend around nine hours a day working, then an additional hour-plus caring for others, and another hour working around the house.

But according to Calta, “the amount of time that the average communard spends on income generation is something less than a half -- usually about a third” of that. “That’s the amount of time that you spend making tofu, or hammocks, indexing books or organizing conferences, or those things we do to generate income.”

Members can select any of the 200 available jobs within the community (with the exception of dishwashing shifts, which are mandatory for everyone), and can change course when they want. But there are other ways to fulfill the community’s 42-hour work week quota, from cooking and going to the doctor, to spending time with your children.

Paul Blundell, a 29-year-old who has lived at the neighboring Acorn Community Farm -- a self-described “farm-based, anarchist, eco-conscienced, secular, egalitarian community” -- said he agrees that commune life has fundamentally changed his relationship with time.

Activities that traditional society may regard as ways of killing time are “considered valuable, as valuable as generating income,” said Blundell.

Before he joined Acorn nine years ago, Blundell was a busy college student in Maryland who, daily, battled D.C.-area traffic. Now, he wakes up without an alarm, has breakfast at a leisurely pace, then gets started on whatever he is taking on that day. For now, he's working on a new building for the farm.

His work schedule is one a lot of people working 9 to 5 may envy. “There’s not an expectation of a certain time when people will work,” Blundell said. “So if something comes up -- if a friend of mine is having trouble and wants to take a walk with me, or boy is it really hot out and people want to go down to the pond, I can take off and do that and just make up the hours another time.”

Other communities are less radical in terms of the level of sharing they ask of members, and how separate they are from the rhythms of mainstream life. The biggest growth in the U.S. has come from the co-housing sector -- resident-governed communities that could easily be mistaken for typical suburban housing developments, or condominiums. They generally don’t involve income-sharing, but feature clustered housing, some parking and a centralized house or space owned by everyone, where members can gather to share meals or spend time socializing.

That's the aspiration of Goldstein, and the families with whom he has spent the last year planning a new development. They are currently in pursuit of land as well as new members from many generations who can easily commute into Boston for school or work.

Goldstein understands that more often than not, intentional communities fail to get off the ground or stay intact, but he is hopeful that his will be a success, with 20 to 30 ecologically sound units, opening in late 2016. He looks forward to a time when he comes home from work, spends a few minutes decompressing in his modest, ecologically-sound home, then walks through a dark, New England night to the great room in a common house. He opens the door and is greeted by warm, golden light and laughter.

“When I ask what is the meaning in my life, it always comes down to other people that I care about,” Goldstein said. “Sure, to be successful I will need to have enough financial resources, but it doesn’t have to be about maximizing that. Maximizing the amount of time I spend with the people that I value -- that really seems to keep giving back.” 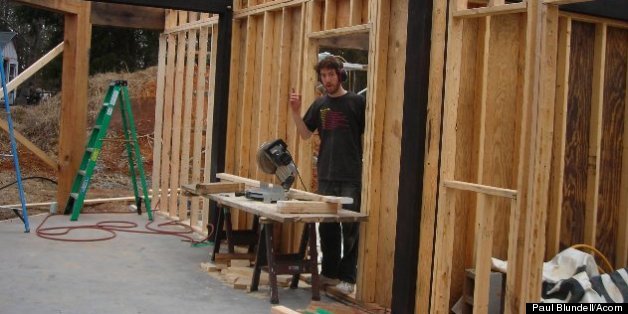 Blundell works hard at Acorn, but says he has more freedom than ever.

More:
UtopiacommunesBest of HuffPostthird metrichuffmag
Newsletter Sign Up
An essential daily guide to achieving the good life
Subscribe to our lifestyle email.
Successfully Subscribed!
Realness delivered to your inbox