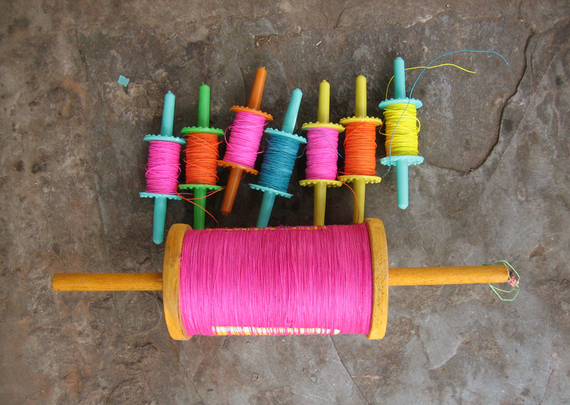 If you find yourself in the northwest of India in January, do yourself a favor and wander toward Ahmedabad in Gujarat; you'll know you're getting close when you start to see a flurry of kites filling the sky.

January 14 marks the harvest festival of Uttarayan, celebrated in the Indian state of Gujarat as the changing of the seasons from winter to summer, or the day when the wind shifts direction and winter retreats. Perhaps capitalizing on the activity of the wind, kite flying is the highlight of the celebration (a sport that began as a diversion for kings but quickly spread to the masses). Now Uttarayan is also known as the International Kite Festival, and it is most widely celebrated in the city of Ahmedabad.

Vaishali Keshani, whose family is from Gujarat, remembers visiting her cousins in Ahmedabad during this time of year -- they spent the weeks before the festival making lots of kites in preparation, simple kites made with lightweight colored paper and bamboo frames. Meena Kadri, whose family is also from Gujarat, says in the time leading up to the festival, you can find people on street corners making patang (kites) and manja, which are kite strings covered in a mixture of rice and ground glass, which enables people to play-fight with their kites. Last year, Vaishali said, her cousins even started making kites to sell. Most of the kites you see are traditional, but each year, Meena says, kite makers experiment with something new, like putting images of Bollywood stars or social messages on them. 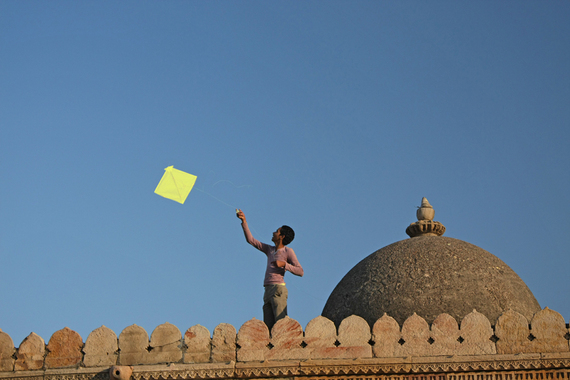 Kite-making is a big business in the weeks leading up to the festival. It's smart to have "a stack" of kites ready to go, says Vaishali, because the main event of Uttarayan is not only kite flying, but kite fighting. If your kite goes down, you don't want to be left out for the remainder of the celebration.

There's a public event at the riverfront in Ahmedabad on the main day of the festival, but much of the fun, Meena suggests, is found amongst locals in the Old City, where people fly kites from the roofs of their homes. Her father's family home is here, on a street named after her grandfather, and Meena's relatives enjoy the festival from their roofs, flying kites and spending time together.

Vaishali remembers standing with her cousins on the roof of their house, flying their kites and fighting the neighbors' kites. The kite strings were tight and cut into their fingers, but Vaishali said, "It was too much fun," so they just moved the strings to their other hands. She says it's really hard to try to cut someone else's kite without letting yours go down, too. Vaishali's mother remembers back to her own childhood: The younger boys were always the most skilled with the kites -- and the most enthusiastic. 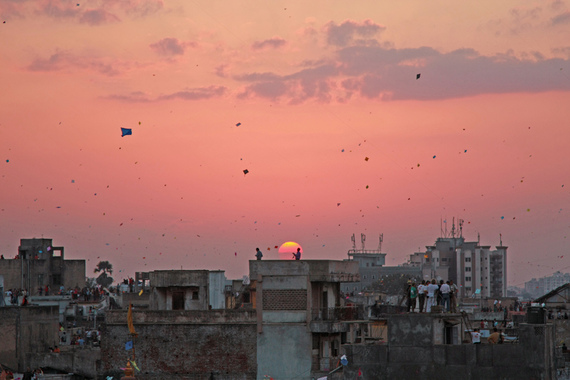 Though the official festival only lasts a day or two, kites are flown for weeks surrounding it. If you are in Ahmedabad during this time, Meena suggests buying some kites to give to children on the streets; many would love to teach you how to fly them, and "you might even get invited up onto a rooftop," she says.

Vaishali lives in the United States, but she says that even in the U.S., many Hindu temples celebrate the festival on a weekend near Uttarayan with food, music and -- of course -- kites. Though Meena was born in, and now lives in New Zealand, her father grew up in Ahmedabad, and Meena lived in the city for several years while teaching design.

All photographs by Meena Kadri; view them here.

Written by Abbie Redmon for GlobalYodel.com

Be sure to check out Global Yodel on Facebook for daily travel inspiration. Guaranteed to awaken your travel bug.