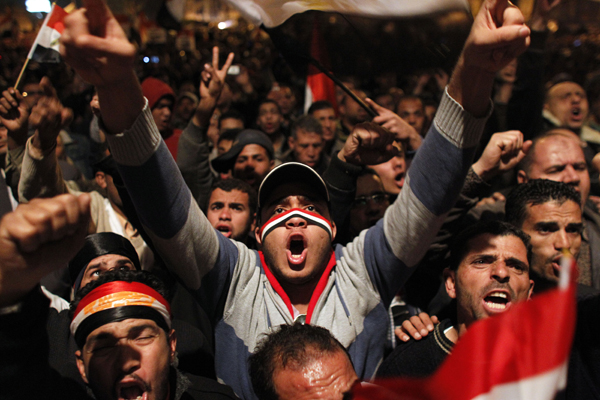 Media commentators remain divided about the hope for a democratic Egypt in light of the protests that have rocked the country. Some fear an Iran-like Muslim theocracy, while others have been cautiously optimistic that a secular order can take hold. Those who predict a positive outcome argue that Egyptians (and the broader Arab world) have internalized liberal-Western norms, which can provide a foundation for sweeping reform.

While it is too early to predict the results of these events, there is one positive sign emerging from Cairo: the V-for-Victory (known to some as the peace sign) has taken hold. This timeless two-fingered gesture, popularized by Winston Churchill in World War II, has appeared at every major global political hotspot in the past half-century. When they use it, the Egyptian protestors signal the extent to which Western thought has permeated their world.

In the dark days of 1941, the Nazis occupied continental Europe, and the situation looked dire for the British. The BBC and the British government launched a propaganda campaign centered on a new symbol named the "V-for-Victory," in order to spur resistance in France and other German-held territories. The sign consisted of the pointer and middle fingers spread wide into the shape of the letter "V." The pro-Allied underground was told (via radio) to chalk the symbol on walls as an indication of opposition to Nazi tyranny. Soon, Churchill and others popularized the semi-salute at home and abroad. The gesture embodied the best of the Great Generation who gave their lives in the fight against an ultimate evil.

In the post-war years, American politicians such as Truman, Johnson, and RFK used the V-for-Victory on the campaign trail to signify their electoral successes. Many will remember Nixon's famous two-handed V as he defiantly climbed the steps to Air Force One for the last time; disgraced by scandal, he appealed to the iconic symbol in an attempt to retain his moral dignity.

In the early- to mid-sixties, clean-cut, college-age protestors used the two-fingered salute to protest the Vietnam War. Students like those sitting in at Columbia flashed the V in order to claim a spiritual victory over the government. They used Churchill's symbol to assume an ethical high ground. Soon, hippies co-opted the anti-war movement, claimed the V-for-Victory, and added the connotation of peace. The sign became iconic for the age of Woodstock and free love.

Baby boomers, rock stars, and British politicians like Maggie Thatcher kept the image alive during the '80s and '90s. The "V" lived on as a fixture in popular culture. At the same time, it sprouted in other areas on the world, becoming a teen expression in Japan. This multitude of actors muddled the "V's" meaning, but never stripped it of its core connotation of ethical opposition.

At some point, the V-for-Victory made its way to the Arab world. Iraqi voters in their first election showed their spread fingers stained with the dye used to mark those who voted. Consciously or not, those brave men and women echoed Winston Churchill's fight for democratic liberties. They opposed sectarian violence and suicide bombings instead of the Gestapo and the SS.

Demonstrators against the 2009 Iranian election similarly displayed the gesture in defiance to fraudulent results. They confronted government forces and subjected themselves to violence in the name of an ideal, expressing their emotions and principles with this timeless symbol.

The "V" has found a new home in Egypt today. Photo compilations on CNN.com, The New York Times and Washington Post websites show anti-Mubarak dissidents hurling rocks, climbing on tanks, and chanting in public, all the while flashing the ubiquitous hand sign. In doing so, they embrace a rich liberal tradition. These (mostly men) join the ranks of millions before them who have used the sign in order to fight oppressors.

Some may say they seize this symbol unaware of or indifferent to its broader historical moorings. While this might be the case, the prevalence of the V-for-Victory suggests that Western norms and values could be prominent in the hearts of many Egyptians. Just as they have internalized the "V," they may similarly accept deeper principles of basic freedoms. We can take this small gesture as a promising sign that soft-Western power has taken some root in modern day Egypt.

The Great English Bulldog's sign has stalked the world and evolved into a manifestation of globalization. We should give the benefit of the doubt to the pro-reform activists. They join a long history that originated in a BBC broadcast, crossed the Atlantic, and has finally landed in the Middle East.

Nathaniel Zelinsky is a sophomore at Yale University. His award winning work on the V-for-Victory has appeared online in the Huffington Post and remains some of the only work done on the symbol. He can be contacted at nathaniel.zelinsky@yale.edu.