The Iraq war has cost the United States $1.7 trillion — in addition to catastrophic human, social and political losses — and that number could climb to more than $6 trillion over the next four decades, according to the Costs of War Project.

One cost that has just begun to accumulate is Iraq veterans' medical care and disability payments, which could top out in yearly spending around 2050 and total in the hundreds of billions of dollars. This is not surprising, even though there is no special fund set aside to help us meet the towering commitment. A look at previous wars shows that VA spending continues to climb for decades after a conflict is over then falls off as veterans die in old age. Payments to veterans from Vietnam and the first Gulf War have not yet peaked, according to Havard economist Linda Bilmes. World War I veteran payments were highest more than 50 years after the war ended.

Veteran spending for the post-9/11 wars may have an even longer tail because medical advances have made gruesome battlefield injuries increasingly survivable and more veterans are filing disability claims for long-term psychological problems such as post-traumatic stress disorder. Rising health care costs will accelerate the economic impact of expensive lifelong treatments.

Ryan D. Edwards, Associate Professor of Economics at Queens College in the City University of New York, culled data from old U.S. Census reports to generate a picture of historic VA disability spending by war. His results were published in an Institute of Medicine study on Iraq and Afghanistan veterans and used with permission to create the infographic below. 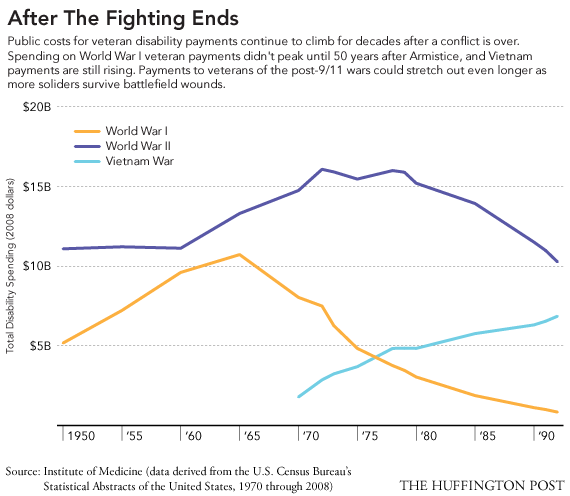 U.S. troops invaded Iraq 10 years ago this week, and our obligations to veterans of the post-9/11 wars have just begun. Yearly veteran spending will rise for the next 30 to 40 years, according to the Costs of War Project, which predicts these payments could total $754 billion. Meanwhile, hundreds of thousands of veterans are waiting for the Department of Veteran Affairs to process their claims, which can take months or, in especially maddening cases, years. 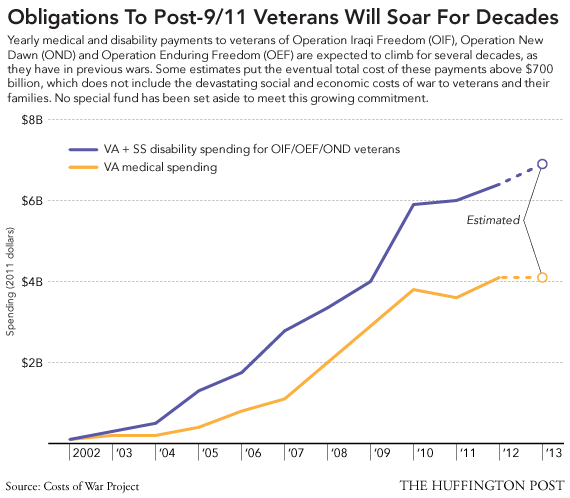