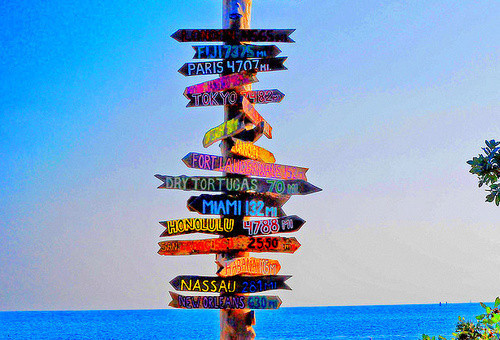 Two of my favorite TV procedurals are Burn Notice and Psych. The former spins the yarn of a blacklisted spy who uses his special ops training to help folks in trouble. The latter is about an amateur sleuth who solves crimes while pretending to be psychic. Both shows aired on the same network, and both shared more than a passing similarity: smart-alecky leads with amazing abilities, long-time buddies working together to solve cases, and -- perhaps most alluring - picture-perfect backdrops. In Burn Notice, it was Miami. In Psych it was Santa Barbara.

A few years back, I was in the doldrums. It was the arse-end of a Toronto winter: pitch-dark at 5pm and as cold as a particularly bad weather analogy. I'd just finished ingesting an episode of Psych and was pining -- nay, yearning -- for the sunny climes of Santa Barbara, California. "Dear Lord, I'd give somebody's right arm to be there," I mused to myself. I quickly dismissed the thought, then went back to scouring WordPress themes for my underappreciated blog. Yep, just a typical Tuesday.

Anyhow, the phone rang maybe two minutes later. It was a buddy of mine, sounding both freaked out and really freaked out. His words, verbatim-ish: "Steve, I just got engaged to a girl from Santa Barbara and I'm moving down there to be with her. Is that crazy?"

His statement hung in the dry, radiator-heated air. A long pause, then my words, also verbatim-ish: "Dude, if you don't do this, I will disown you. Then I'm going to move down there and marry her myself -- do you get me?"

He got me. And so he moved down there. Without employment, health insurance, or a travel visa. Also, he was Catfished, got engaged to her anyway, was booted out of the house within few weeks, and returned to Canada with zero money or possessions. Otherwise, a great time, one can assume.

The point of this story is that Santa Barbara has long been a TV paradise to me: a place where the sun always shines, the palm trees clack in the breeze, and enough fascinating things take place to keep my adult ADD in perma-check. Did I end up moving there? Well, close enough: I live in Los Angeles now, which is a mere hour or so away. The weather's the same, and there are plenty of palm trees and beaches here to boot. So zero complaints on this end. But I absolutely stuck to my pledge to visit Santa Barbara, and I wasn't disappointed. The city's inherent beauty aside, I felt like I was walking around an episode of Psych, trading barbs and solving mysteries with Shawn and Gus. It was exciting and immersive: like an augmented reality version of a regular vacation.

The same rules applied when I recently got to check out Miami for the first time. Gorgeous place: South Beach, the Cuban District, the tropical weather -- not to mention those neighboring everglades. It had all these attributes plus 200% more of the above attributes. Miami is Santa Barbara on crack. This is a good kind of crack, and it's a fortified ingredient in the Burn Notice recipe. Despite it being my inaugural visit, Burn Notice made Miami feel like home. So many of the locales were immediately familiar, and through the lens of the show even hokey tourist venues had a badass veneer. It felt like at any moment ol' Michael Westen might come barreling around the corner to take out some nasty drug cartel. Augmented reality vacation #2, baby.

And I'll be honest -- I'm excited to do it again. I'm thinking Oahu, Hawaii, to chill on the beach where Oceanic flight 815 crashed in Lost. Or maybe I'll slap on some creepy all-black contacts, trek on down to Louisiana, and vampire it up True Blood style. So many options. So the next time you're feeling a little seasonally affected come wintertime -- or are simply yearning for some travel with a little extra zing -- why not give it a shot? It's a fun and unique way to add some familiarity to the unfamiliar. And hey, who doesn't want to insert themselves into their favorite show for a few days? (Unless your favorite show is Oz or Orange is the New Black. Maybe try to avoid that.)