When did I start needing my friends at home to tell me I'm having a good time on vacation?

Travel changed for the worse when I tucked a brand new Blackberry smart phone in my pocket on a 2009 trip to Morocco. Ostensibly the device was to let me stay in touch with my husband back home while I explored Marrakech with a friend. It turned out to be the first block in a barricade I'd build between myself and the art of travel. I wrote in my blog later:

Morocco was an entirely new world. It's an assault on all my senses and a test of my reflexes. The scent of mint and cumin compete with diesel fumes. Scooters bearing families of four buzz by within millimeters of my elbow - I leap out of the way, careful not to trip on the uneven cobblestone or step in front of that horse or donkey whose clip-clopping hooves can't be heard in the hubbub. The call to prayer tries to rise above the melee of the souk proprietors calling me to their store, the trill of the snake charmers, and the little boys asking where I'm going so they can lead me there for a few dirhams. ... Henna tattoo artists and clinking water sellers give way to night. The cacophony that would overwhelm me elsewhere energizes me here.

But even amidst all this, my eyes continually strayed to the little screen in my hand. I posted dozens of photos to Facebook and waited for comments. Morocco was the most compelling world I'd ever entered, yet Facebook had more allure.

It's been a downward spiral since. Riding camels in the Sahara, my silhouette on the silver sands came complete with phone in hand -- the better to chronicle the experience. Head tilted back in northern Thailand to marvel at thousands of lanterns soaring into the night sky during Loy Krathong, my view came through the camera screen on my phone. Scrabbling through the pungent dirt of a remote swath of Italy learning a truffle dog's secrets, I paused repeatedly the better to get just the right angle on a photo of the dog's snout emerging from the earth.

Great pictures? Pretty good. People on Facebook liked them, and on Instagram too when that came along. But really? Really, is that why I got on the plane?

A trip to Vietnam last year ignited an awakening -- to the realities of the world, to my shortfalls as a traveler. But even as I struggled to process the experience enough to write anything in my notebook, tap, tap, tap, I shot one cell phone photo after another. And just like that everyone back home could see exotic Saigon for themselves. Look! Dana with pho! But they couldn't know from those photos what I felt. I wrote later, from home:

... amidst the searing heat and frenzy and disappointment in myself were glimmers of joy, little pieces of Vietnam I could grab hold of to love. An inky black iced coffee poured over creamy sweetened condensed milk. A little boy running out as we zipped by his Cat Ba home on scooters, to give Brian a high five. The giggles of women who wanted to ask questions about my hair, so unlike theirs. The gnarled old lady who didn't have the exact right change for the cutting boards I bought who just gave me chopsticks instead. The cold bliss of fresh coconut juice. The perfection of a banh mi from the guy on the corner. The surreal moment when the monk in a temple at the end of a dirt road on the banks of the Saigon River read my future and told me to be calm, just calm down.


No faux-nostalgic photo on Instagram could speak to the maelstrom of feelings that traveling Vietnam sparked inside me. So why did I spend so much time attempting to document our experience with photos?

I could say I was too overwhelmed to write, and that's partly true. Aside from scribblings like "poisonous snakes are always cooked with papaya" my notebook contained little more than addresses and lists because I couldn't process what I was experiencing. But really it was just laziness. It was easier, far easier, to snap a photo as a memory aid than to force myself to connect enough with the situation to write down the details. And as much as I wanted to hang on to the barrage of stimuli and the thoughts tumbling through my head to mull over later, I killed that option bit by bit with every tap on the screen. I couldn't resist the profound urge to capture the experience -- I just went about it the wrong way.

Not every traveler falls prey to this temptation. Paul Theroux rarely takes photos. When I had the fantastic privilege of interviewing him, I asked him why.

"When you take pictures something in your brain shuts off," he answered. "When you don't take pictures you look very hard and you study the scene and you remember."

And some people get this. Travel writer Robert Reid, who fessed up to "rushing like a Black Friday shopper to spread news of [his] travels in real time" said in his recent National Geographic Traveler piece The Secret to Remembering Travel, "The key to maximizing future memories, then, is to simply be present, to pay attention to the details that interest you, to look at them closely."

This made me wonder. When did I last remember to be present and pay attention? It had to be on the first trip my husband and I took overseas -- a month in Europe in 2001. The only one where we had -- between the two of us -- one camera. A film camera. It offered no instant gratification. The film was costly. We used it sparingly (relatively speaking to today when we travel with a smart phone each plus a heavy duty digital SLR and a GoPro). And I wrote feverishly in a journal. Photos of that trip are one-dimensional trinkets. But re-reading words scrawled on a train I'm there again, experiencing the alchemy of travel, reliving the trip that transformed and shaped who I'd become. We had a digital camera by the next trip, and travel hasn't been the same since. 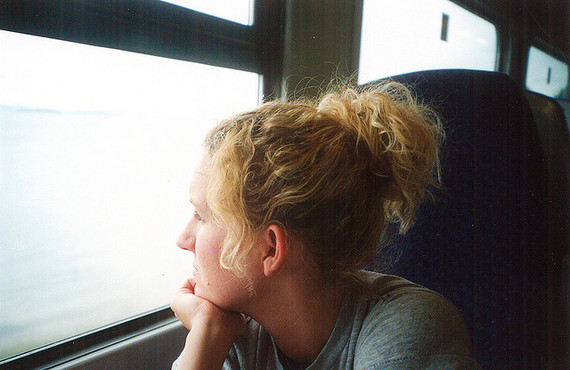 And now the temptation to use technology is so great that I haven't traveled without a tether to the rest of the world since the Morocco trip, except one perfect week off the grid rafting and camping along the Rogue River in Oregon. I wrote later of a beautiful moment not captured and immediately relayed on Instagram hashtagged #GuessWhatISawInMyBathThisMorning

Pure wonder is rare as an adult . Not much in the world of manufactured entertainment takes our breath away. So when I raised my face from a splash in the pristine water of the swimming hole at Mule Creek to find five sets of brown eyes contemplating me, I gasped. One by one, the deer turned and made their surefooted way out of the creek, leaving me dripping and smiling.

It's seared in my memory even without broadcasting it to the world -- or rather because I didn't.

But what about when I can't get off the grid? Mat Honan writes in Can't Get Away From It All? The Problem Isn't Technology -- It's You for Wired: "The phone isn't the problem. The problem is us -- our inability to step away from email and games and inessential data, our inability to look up, be it at an alpine lake or at family members. We won't be able to get away from it all for very much longer. So it's vitally important that each of us learns how to live with a persistent connection, everywhere we go, whether it's in the wilderness or at a dinner party."

It's time I learn to let go. We're flying 10,000 miles to start our next trip, a return to Southeast Asia. Airfare for my husband and me cost more than the used car we bought recently. He's on his only vacation of the year. Are we really traveling all that way and spending so much money and time to live out a travel show on Facebook and Instagram? One we know is half fake, anyway? (I wrote about the lie that is the shiny happy Facebook vacation after I spent a miserable rainy week in Florence posting gelato photos only to come home to find everyone thought I had an amazing trip.)

The answer has to be no. Even though (sadly) I get a little -- OK, a lot -- freaked out thinking about going dark on all my social media accounts for three weeks, and I'll have to retrain my Pavlovian response which is to post a photo of Every! Single! Thing! I think is interesting, and it will be a lot more work to be present than to just take a picture, to process my reactions internally rather than blurt them out on Facebook, I have to step away from the phone. We have a second chance in Vietnam. I'll take pen and paper -- and maybe a film camera -- and try to rediscover my lost art of travel.