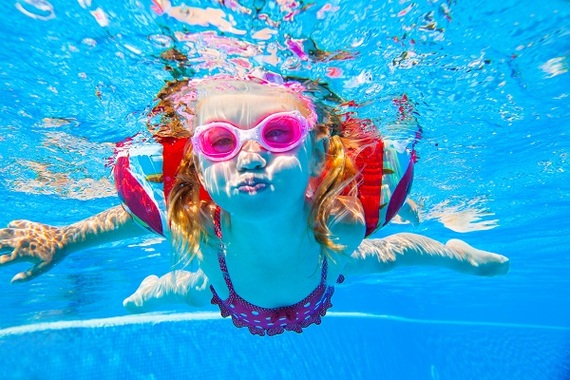 As a lifelong Florida resident, I have spent my fair share of time in pools and at the beach. As much as I love it, it's kind of a health hazard. If you pay attention to social media and the news, you're probably thinking about lightning, sharks, rattlesnakes, and alligators. Here are your odds of survival.

They're out there, lurking in the deep, coming up at you like deadly, soulless torpedoes with teeth. It's a terrifying image. So how likely are you to be attacked by a shark at the beach?

Florida has more shark attacks than all the other states put together. Between 2006 and 2010, there were a whopping 110 attacks...and one fatality. Your odds of being attacked by a shark are 1 in 11.5 million. Your odds of dying from a shark attack are just plain silly. 200 million people visit US beaches each year, and less than one per year is killed by a shark. Let's take that one off the list.

This is Florida. If you see a puddle, there's probably a gator in it. Alligators don't live in the ocean, but they do regularly freak out beachgoers with an occasional dip. Not long ago, a big ugly was captured on Fort Myers Beach.

So what's the risk? Once again, Florida is number one, with 337 documented gator attacks, 17 of them fatal. Of course, that's 1948 till now, and exactly zero of them happened on the beach. You're probably safe from beach-loving gators.

As if gators and sharks aren't enough, you may have seen news stories of rattlesnakes on the beach. If Florida is starting to sound a little like Australia, you're not far off. Happily, we don't have giant spiders.

Pro tip: If you see a deadly snake on the beach, don't poke it with a stick.

It may sound like unlikely, but lightning is a legitimate danger in FL. An average of only 33 people die each year in the U.S., and less than 300 are injured. Not many, but all of them are in three states - Mississippi, Louisiana, and Florida. That number would be a lot higher if more people ignored common sense.

Simple rule: if you see lightning or hear thunder, even in the distance, get out of the water and find shelter. Not under a tree. Lightning is not to be trifled with.

What you should really worry about

All joking aside, ignore the scary SHARKNADO scenarios that aren't going to happen and pay attention to the stuff most likely to ruin your vacation. Here's what you need to stay safe and healthy here in Florida:

Welcome to Florida! Enjoy your vacation.

More:
beachHealthParentsWeird FloridaSharks
Newsletter Sign Up
Raise the kind of person you'd like to know
Subscribe to our parenting newsletter.
Successfully Subscribed!
Realness delivered to your inbox