There's a cute little umbrella in your drink, a sort of reminder of the fall storms you've escaped back in the states. While they're soaking up north, you're flaked out under baby blue skies on one of the golden beaches of western Mexico, perhaps at Mazatlan, Puerto Vallarta, Los Cabos or Ixtapa.

It's hard to imagine those gorgeous bays once had a much darker side. Old-world Spanish sea captains tried to stay as far away from them as possible, because they were often packed with sleek caravels and frigates flying the skull and crossbones.

Pirates hid out in the bay of Cabo San Lucas. Photo by Bob Schulman.

The pickings were especially good once or twice a year when huge treasure galleons passed by on their way back from voyages to the Philippines. Lumbering through the seas under sails marked with the blazing red cross of the Roman Catholic Church, the ships - some almost as long as a football field - were called the Manila Galleons.

The story of this ancient, seagoing version of today's jumbo jets goes back to 1565, forty-four years after the Spanish conquest of Mexico.

In the Far East, silver rules. Emperors, pashas and shahs dream of filling their palaces with the shiny stuff - and hundreds of mines across the Pacific in Mexico are loaded with it. Meanwhile, the viceroys, marquises and grandees of Mexico yearn to fill their grand haciendas with silks and porcelain from China, and their kitchens with hot stuff from the Spice Islands.

So East and West made a deal to swap their goods. The trading post would be at Manila, a Spanish colony already serving as a commercial link between Europe and Asia. To get there from Mexico, the westerners came up with a new breed of galleons - big enough to carry thousands of silver pesos (coins about the size of a U.S. silver dollar) and as many as 1,000 traders, crewmen, soldiers and settlers traveling to the Far East. 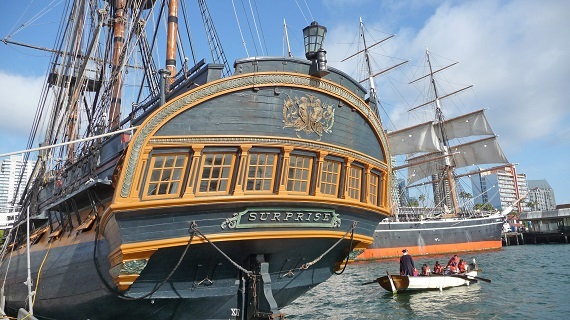 A ship used in the movie Master and Commander was built to look like an old-time galleon. Photo by Rich Grant.

The ships' westbound voyages started at Acapulco, Mexico's chief Pacific seaport, where the galleons were loaded with silver and supplies for Spain's overseas colonies. They sailed out of the bay under protection of the five gun-studded bastions of Fort San Diego, then latched on to the westerly trade winds to arrive in Manila two to three months later. 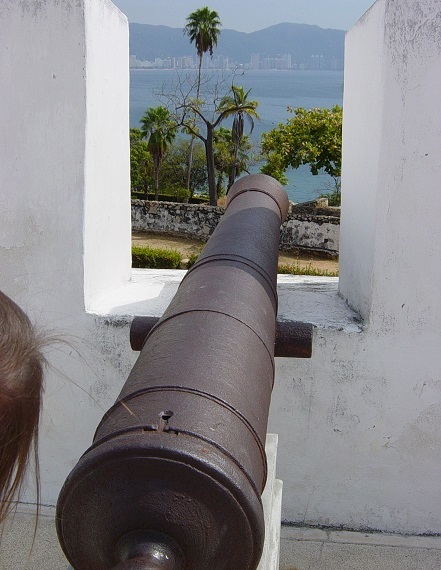 It was a lot harder getting back. Re-loaded with Asian treasures along with returning passengers, the ships sometimes had to sail as far north as Japan and even the Aleutians to find winds and currents heading back across the Pacific. Usually, they ended up off the California coast near Cape Mendocino (170 miles north of modern-day San Francisco); from there, they caught winds blowing off and on down the rugged shores of California, Baja California and western Mexico.

The trip from Manila to Acapulco typically took five or six months, and it was fraught with perils. Not only did the sailors have to worry about storms, tricky currents, starvation, dehydration, scurvy, and rocky, fog-shrouded shorelines, but their exotic cargoes were the prize targets of pirate superstars of the likes of Sir Francis Drake, Henry Morgan, Thomas Cavendish and the Dutch marauder Joris van Speilbergen. 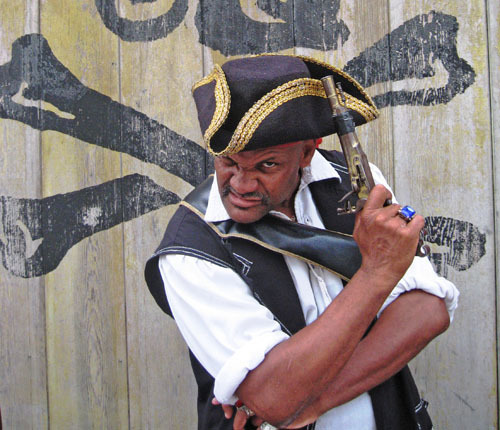 No wonder of all the galleons' voyages - they trekked back and forth across the Pacific singly or in pairs for 250 years until Mexico gained its independence from Spain - around one out of five trips ended in some kind of disaster.

Prey for the Jolly Roger

It didn't take a galleon scientist to figure out when the homeward-bound ships would show up off the coast of Mexico. They usually left Acapulco in January or February to take advantage of the season's steady winds to the Philippines. They'd arrive in Manila in late spring, and after a few months of trading would start the homeward voyage around July. That would normally put them along the Mexican beaches heading to Acapulco by mid-winter. 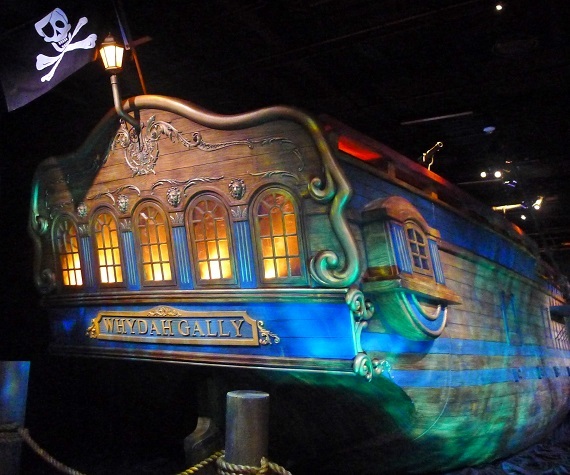 Actual pirate ship on display at a museum. Photo by Bob Schulman.

So all the pirates had to do (when they weren't otherwise picking off coastal commerce) was to find a cozy harbor and sit around for a month or so waiting for the galleons' enormous sails to pop up on the horizon.

Some of the homeward-bound vessels were snared at the tip of the Baja Peninsula at the freshwater port of San Jose del Cabo. Nearby Cabo San Lucas was another favorite hideout of the swashbucklers, as were spots along the Mexican mainland such as the three islands in the bay of Mazatlan, the twin bays of Manzanillo and coves along the 60-mile-long bay of Puerto Vallarta. 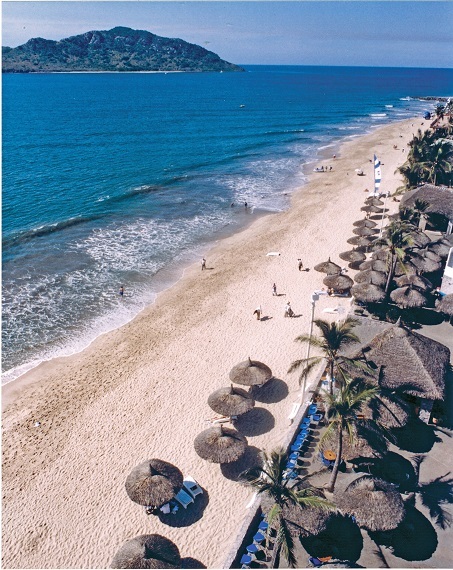 One of Mazatlan's offshore islands (rear of image). Photo courtesy of the Mazatlan Tourism Board. 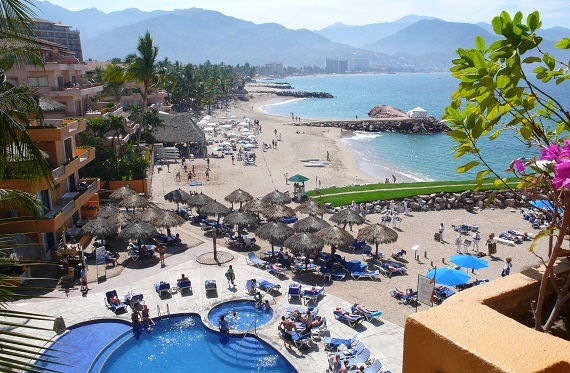 At the end of the gauntlet of pirate hideaways was Zihuatanejo. If the galleons could make it past there, the remaining 150 miles to their home port at Acapulco were usually a breeze.

Zihuatanejo's snug, meandering bay, however, was a formidable hurdle, especially since it was the home port of some of the coast's most bloodthirsty buccaneers. Stories tell of a galleon on its way back from Manila that blundered into the bay - and sailed right into the cannons of a pirate fleet anchored there. Fine Chinese silks from the ship drifted ashore on a local beach, from which it got the name still on the maps today, Playa La Ropa (beach of the clothes). 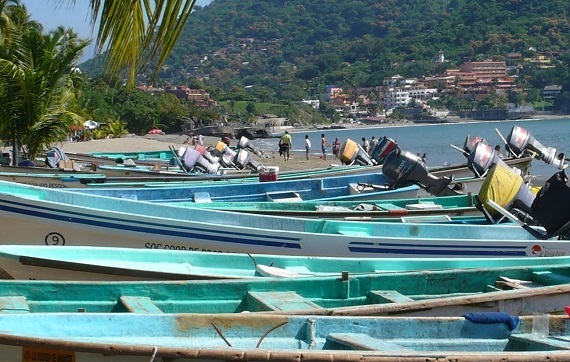 Zihuatanejo Bay was a favorite hangout of the buccaneers (Playa La Ropa stretches out at rear of image). Photo by Bob Schulman.

The galleons' grueling trans-Pacific voyages were just part of the silver-for-silks odyssey. It began at mines across Mexico, from which raw silver was smelted into coins and ingots to be shipped or carried overland to Acapulco, and at the mega-veins of Peru, from which the coins went by sea to Acapulco.

When the galleons returned from Manila, their cargoes of silks, spices, ivory and the like were off-loaded at Acapulco where the single largest share, the so-called King's Fifth (equivalent to a 20 percent tax on the shipments), was earmarked for a 6,000-mile trip to the Royal Court of Spain. Another large portion was divided up between merchants who'd financed the trips. Still other goods "mysteriously disappeared" from the docks to show up for sale elsewhere in Mexico and at Spanish ports all the way down to Peru.

The King's Fifth was carried by mule trains and on the backs of Indians over crude roads from Acapulco half-way across the country to Mexico City, and then on to eastern Mexico's main port at Veracruz. From there, treasure fleets took the goods to Spain, starting with a harrowing day or so dodging pirates lurking just outside the bay in the Gulf of Mexico. 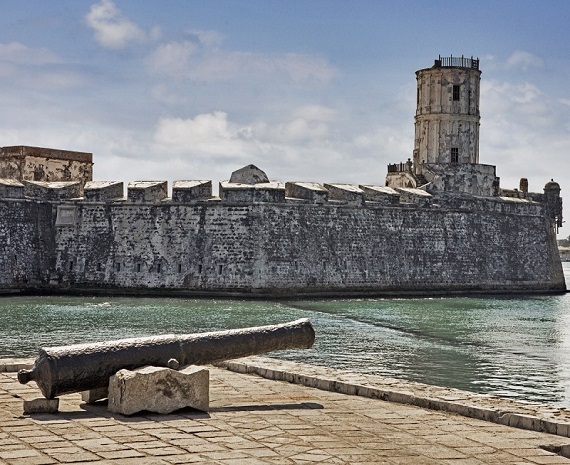 A few days later the galleons were in back in pirate-infested waters, this time in the Caribbean for a stop at Spain's outpost in Havana to pick up supplies for the final leg of the trip. After that, there was one last hurdle: staying afloat and on course during horrendous weather across the Atlantic.

By the time the Asian treasures got to the Royal Court in Spain, much of the goods had traveled two-thirds of the way around the world.