If you are getting ready for your first family vacation, I want you to prepare yourself. Gone are the days of Bloody Mary's at the airport, taking a snooze on the plane, while dreaming of the fruity drinks, renting a fun car for the week, sleeping in, sunbathing, and anything else you have always associated with a restful week in the sun.

I'll warn you. What you are about to read is cringe-worthy at times. It may even make you dash to the phone to cancel your upcoming trip. Don't. You'll get through this. You will adapt. And when all else fails, Xanax and wine can make anything feel like a vacation.

Give yourself proper time before your flight. In years past, my husband and I would dash into the airport with our two bags, breeze through security with only minor hiccups, and then quickly move on to the airport bar, to wait and self-medicate my pre-flight anxiety, by drinking many, many, beers.

Traveling with a toddler and an infant is a bit more complicated. Getting checked in for our flight took almost 40 minutes. I could blame the long lines or the guy behind the counter, but in reality, the cause was more likely our two large suitcases, two car seats, stroller, and 2 ½ year old, who insisted on jumping up and down off the luggage scale, when taking a break from zig-zagging between other passengers, and pulling on the ropes which designate where the lines should form. All while singing "Let It Go," from Frozen, at the top of her lungs.

It's a free show wherever we go, enjoy.

By the time all of our belongings were checked and boarding passes distributed, I was definitely ready for a bucket-size Bloody Mary. Instead, I settled for inhaling a bagel and two sips of coffee (because who has the time or extra hands to carry hot beverages?), while Riley crawled under the tables to do her "business," threw the baby's puffs on the floor, and told everyone seated around us that she was going to drive the plane and that it was not going to be scary. 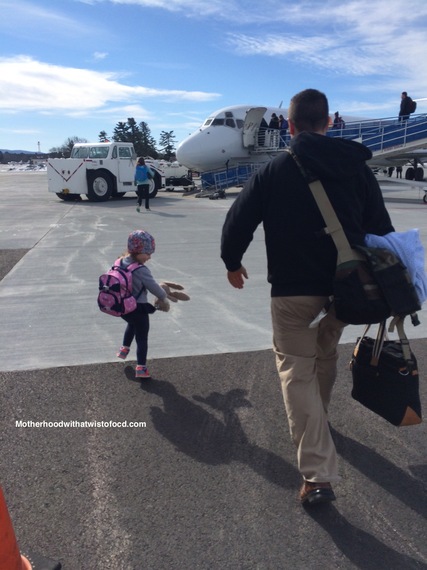 I've always hated flying. Before being properly medicated for my OCD, I used to call all of my family members to tell them I loved them, just in case the plane dropped from the sky, and we all suffered a very quick, yet fiery, death.

There is no time for such calls or worries when traveling with children.

The time instead is spent trying to get your infant to stop crying, while trying to entertain your toddler enough to get her to stop kicking the seat in front of her. To the man in 21 B, if you are reading this, I'm sorry. For the 346th time, I'm really sorry.

Pat lucked out on the first leg of our trip, as Bode decided to snooze most of the way on him, and he too was able to join in on the catnap. During that time, Riley and I read "The Diggingest Dog" at least 13 times, ate all of the snacks I packed in her back-pack, and played a game where you feed a clown snacks (What? Why?) on Pat's Ipad.

On the flight back, Bode projectile vomited on me, which resulted in me having to walk around LaGuardia like I had peed my pants, while smelling like sour milk. And, on the second flight home, he decided to have a monster blow-out, just as we pulled back from the gate, so by the time we de-boarded in Vermont, I had a nice scent going of sunscreen, poop, and vomit. The joys.

I was in desperate need of a hot shower and bottle of wine. And, no, I was not willing to share. You won't be either, so pick up two bottles on the way home.

Traveling with children means traveling with gear. Lots and lots of gear. Gear that will not fit into a two-door convertible or Jeep wrangler.

Welcome to the world of mini-vans folks.

I have to say; I quite enjoyed the extra space, doors that open by pressing a button, and DVD player in the backseat, which allowed for drama free, melt-down free, traveling.

It's not fancy, but it works, and it works well. And the husband looks pretty cute driving it too.

My vacations used to consist of sleeping in, drinking, and baking myself to a crisp, while reading some go-to Nicholas Sparks novels next to the pool.

We still drank a decent amount of wine, but that is really the only similarity.

Bode didn't want to miss a second of vacation fun and therefore woke up at 5:45 every day.

Going to the pool was a three-hour ordeal, which consisted of a lengthy session of lathering 75 SPF sunscreen on every inch of exposed, precious, baby skin.

But, along with some of the not-so vacation like moments, we had some really amazing moments too. We went to the Brevard Zoo, which was awesome! Swam in the pool. Walked on the beach. Had a great vacation date-night. Attended a breathtaking family wedding. And, of course, participated in afternoon cocktail hour at Nana and Poppy's, daily.

Riley's favorite activity? Sitting in the grass, watching the gate go up and down, as cars left my parent's gated-community. Each time she would squeal, "That was so awesome!" .... I mean who needs the zoo, right?

You will come back home exhausted and covered in puke, but the memories will last a lot longer than the smell, I promise. 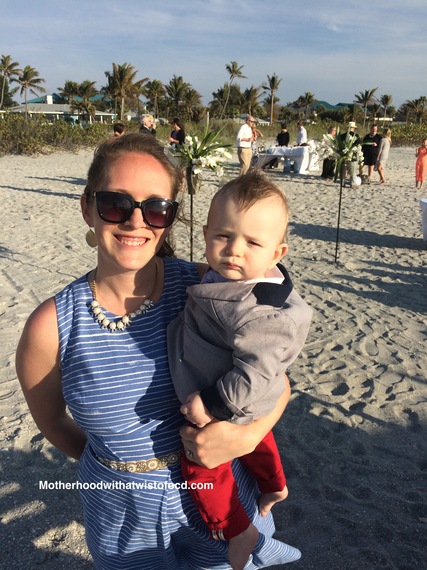