Here is an outstanding piece by a gentleman who was actually on the plane.

But most importantly, I thought about the entirety of the blog piece. And by starting this discussion with incorrect information, I believe it muddies the piece as a whole.

The first piece I wrote here was this: "When Wrong, We Need to Own up to It."

Several people have wondered whether I was coerced to redact the piece. While some of my opinions are still intact - that I wish this President got in front of this more, that there's a difference between projecting calm and falling off radar - in reading more, in retrospect, some of my positions have changed.

Why choose to remove it? I want to be accurate in what sparks these opinion pieces. I incorrectly reacted to the when and where the President got his information, and incorrectly dropped in a golf photo from 2008.

It was my own personal belief that if I write an opinion piece based on a fact, and that fact is incorrect, then it's my responsibility to deal with that. I knew what triggered that piece... and it came from an inaccurate place.

However, per the request, here's where it started.

May you all have safe and happy holidays. 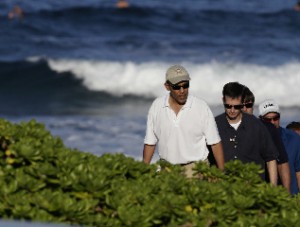 What is wrong with this picture?

It's December 23 - I lug my tired butt to the airport, ready to leave for vacation. Carrying a bottle of very nice wine, I have to leave my place in the security line as I can't bring it as a carry-on, check it in a bag, get a special box, go through security again and hope I - and my fancy wine - arrive intact. Despite some turbulence, we do.

It's December 24 - I'm keeping track of some winter storms that could affect a few arrivals here and there. The weather could screw up air travel. That was the big fear. Weather.

It's Christmas day, and the only thing that stopped 12/25 from feeling a lot like 9/11 was a failed detonator and a guy named Jasper Schuringa. Weather now seems like a quaint travel threat - like a cold does compared to the Bubonic Plague.

It's December 26, and the last of my guests arrive keenly aware of what happened over the skies of Detroit. Across America, everybody's gut tightens and old fears and old wounds re-open.

Meanwhile, the president continues his vacation.

America lucked out this holiday season. It's as simple as that. Something terrible could have happened and It was the bravery of passengers, and the ineptitude of a would-be terrorist, that prevented it.

Not the police bottlenecking the only road into the airport. Not the nice lady making sure my liquids were in the right containers. Not the German Shepherd sniffing my boy parts.

And if you're like me - that scared the crap out of you. You probably wanted assurances. What will be done to prevent this? How are we reacting?

If you're like me, you're not looking for Attorney General Eric Holder, or Representative Pete King, to be telling you how it could have been worse or how it will be managed.

When the nation is attacked, I expect to be informed and hopefully calmed by the President of the United States.

So I ask, one more time - of this president who understands that how a message is delivered is just as important as what the message is - What is wrong with this picture?

Yes, the president deserves a vacation. Especially this president, who I believe has worked so hard on issues he cares about to the best of his ability; who is attacked and stalled by enemies for every attempt to fix every ill he inherited over the last eight years.

This is a man who needs a break.

But that vacation should have been over moments after the plane landed at noon on Christmas day, and everybody was starting to do the math that once again, al Qaeda tried to strike at this country.

This is no "My Pet Goat," or sharing birthday cake with John McCain while New Orleans flooded. But it's close enough that it's making the hairs on the back of my neck stand up... and I like this president.

Some things are too important to delegate to a subordinate, or manage through a BlackBerry.

It's December 27, and people are getting ready to travel for New Years Day. They're going to get patted down, sniffed and searched. They will not be able to get up for the last hour of their flight. And God knows what else.

They will be inconvenienced, in a way that I'm sure every sane human being on the face of the Earth hoped that Umar Farouk Abdul Mutallab had been.

And even if it were only for appearances - even if it were simply to make people know the commander-in-chief was in front of whatever buttons and levers are at his disposal to act and react to threats to this nation - the president should have been inconvenienced as well.

There are moments like these where it's important not to simply just do the work, or be told by others that the work is being done. We need to see it.

And that could have been done in Hawaii.