In 2004, it felt like the world was about to meet Vaginal Davis, the outsized transgender performer who lit up Los Angeles' underground art scene for decades. Writing of "a career that almost no one outside the cognoscenti knows of," Guy Trebay at the New York Times wondered why the shift from cult status to household name hadn't yet happened for the "deliriously funny writer-singer-filmmaker-poet-performer, to cite just a few of [Davis'] hyphenates." 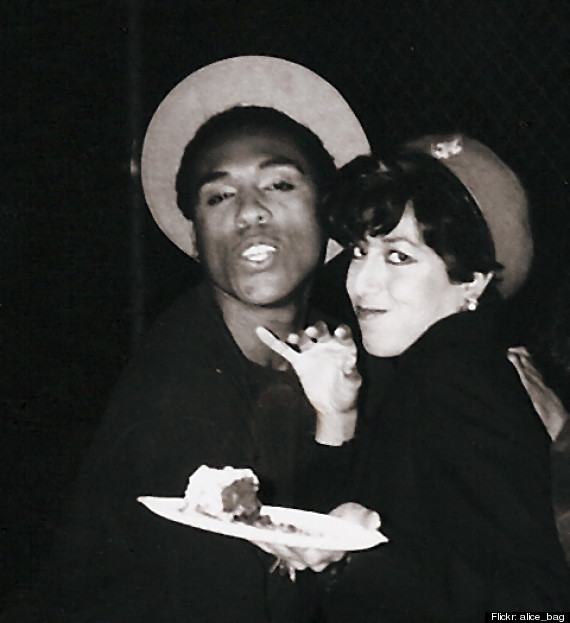 A move to Berlin later, and the artist Le Tigre mentioned in their song "Hot Topic" over a decade ago is finally in the spotlight. This Friday, Davis welcomes the public to the first major solo exhibition of her visual art, at Participant Inc gallery in New York City. The exhibit, titled "HAG - small, contemporary, haggard," references the Queercore movement that sought to reclaim the term "hag," which was originally applied to "women of a certain age" and later used as a term of endearment.

It's also a characteristically florid nod to Davis' own legacy as the founder of the HAG Gallery in L.A., where the beautiful and the weird rubbed shoulders in the eighties. The concerns of this winter's exhibit, however, are less about returning to Davis' past than updating it. Viewers can expect new installments of Davis' cosmetics-and-tempera portraits, which feature large-eyed white women with pursed lips striking a pose. The often noseless subjects are characters linked by a thread, whether their particular story is about lesbian domesticity or gender confusion. The captions that accompany them celebrate even the meme-iest of feminist tag lines, showing that Davis will always have her finger on the pulse, whether she's in L.A., New York, or Berlin.

Scroll through the slideshow below for more images from "HAG-small, contemporary, haggard," and let us know what you think of Davis' work in the comments:

HAG–small, contemporary, haggard shows at Participant Inc from November 9 to December 16, 2012. More details can be found at the gallery's web site, participantinc.org.