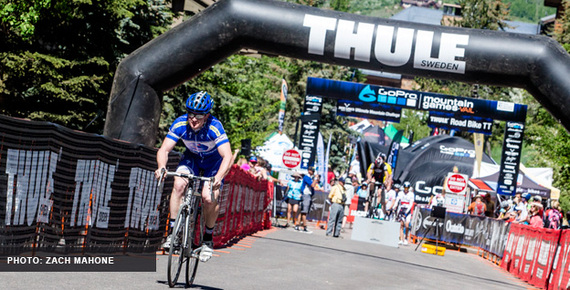 The GoPro Mountain Games, held in Vail, Colorado each year, is the country's greatest celebration of mountain sports. All photo copyrights are solely those of GoPro Mountain Sports and affiliates.

Most people probably classify the beautiful Vail, Colorado as a luxurious ski resort with world-class slopes and amenities. But when the snow runs dry in the dead of summer and the skiers and snowboarders are long gone for the season, Vail becomes home to a whole new animal: the GoPro Mountain Games.

Vail has been hosting the GoPro Mountain Games since 2005, bringing together the country's best professional and amateur athletes to compete in over 25 different mountain sports. This year from June 10-12, more than 60,000 spectators came to watch 2,500 athletes compete in games ranging from extreme kayaking to dog comps (the competitors are not only human) for more than $100k in prize money.

This summer I had the pleasure of attending the games after my good friend Martin Kuhnel landed a spot in the prestigious IFSC Climbing World Cup. Easily a crowd favorite, this climbing competition brings in some of the world's best climbers to the only cup on US soil in the global climbing circuit. Though I spent a majority of my time watching the incredible bouldering competition, the Vail streets--including Golden Peak to Vail Mountain, Vail Pass, Lionshead Village, Solaris Plaza, and Homestake Creek--were constantly pulsing with energy. 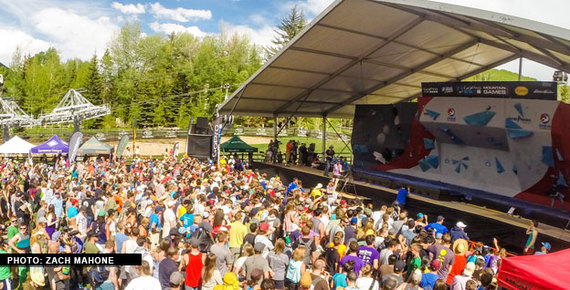 The IFSC Climbing World Cup brings together some of the world's best rock climbers to compete for the Vail crowd.

With all live sporting events within walking distance of one another, athletes and fans were easily able to traverse the shopping areas of Vail and watch different competitions throughout the three days. As skateboarders snaked down the streets, bikers slowly pedaled through, or kayakers trekked by with huge, colorful kayaks heaved over their heads, vendors pitched their tents pole to pole to push sports drinks, sunscreen, and the likes through free sampling. Live music poured from speakers during a free concert line-up, and there was a film festival (including an exclusive showing of Universal Studio's The Secret Life of Pets) and an interactive exhibition area. The excitement was infectious.

And the sports were something to watch. The very first thing I saw after emerging from the parking garage was a slacklining ring where a limber slackliner was expertly performing flips and splits on a thin, flexible band of fabric stretched between two poles during the 2016 US Pro Series. More of the classic mountain sports included cycling (ranging from the Everbank XC mountain bike race to a road bike time trial), running (with five different events), and fishing (with various fly fishing events). 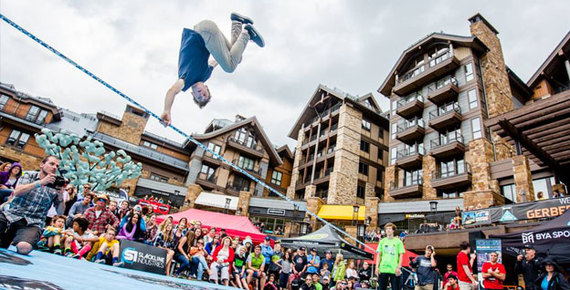 The best Pro slackliners converge in Vail Valley in the 2016 US Pro Series.

The most unexpected of all the sports was easily the dog events. There were four in all: Speed Retrieve, Extreme Vertical, Outdoor Big Air, and Rocky Dog Trail Run. Speed Retrieve is essentially freestyle swimming for pups; basically, whichever dog reaches a buoyed chew toy in water first is the Michael Phelps of canines. Extreme Vertical is analogous to the high jump in track and field, while Big Air is something of a long jump in water. The trail run consists of dog and owner racing to reach the finish line together. 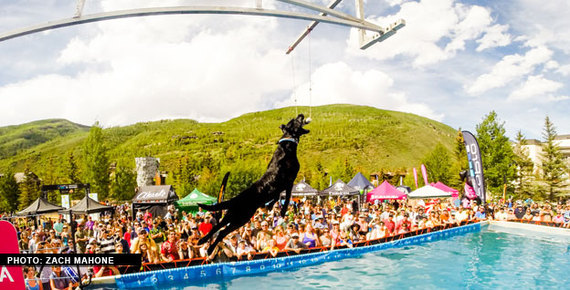 One canine aiming high for that chew toy.

On the raging Gore River that drives right through the center of the town, there were determined kayakers, rafters, and stand-up paddlers competing to sweep their race. The Down River SUP (Stand Up Paddle) Sprint found skilled paddlers fighting for three miles in chilly waters to snag the best time. In the 8 Ball Kayak Sprint, kayakers were not only pushing through a 200 meter sprint but also trying to avoid the armored boaters purposefully trying to knock them off their game. 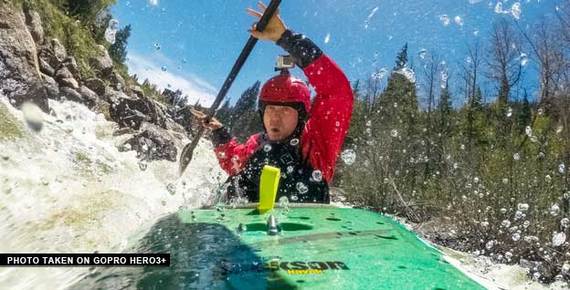 Surviving the swift waters of Gore River can be a challenge for kayakers and other aquatic athletes.

Though this event is geared for mountain athletics, you do not have to love the mountains or athletics to love the GoPro Mountain Games. There are events you can show up and participate in--Yoga Girl experience anyone?--and the nightlife, concerts, and simple beauty of Vail is something to see all on its own. The country's best celebration of mountain sports is easily one item you want to have on your bucket list for next year.