The Sikh Holiday of Vaisakhi is celebrated every year on April 14. Also frequently spelled Baisakhi, Vaisakhi has origins as a springtime festival in the Punjab region, but since 1699 has taken on a great deal of religious significance for Sikhs. On Vaisakhi in that year, Guru Gobind Singh created the Khalsa and established much of what is at the core of the Sikh faith today. 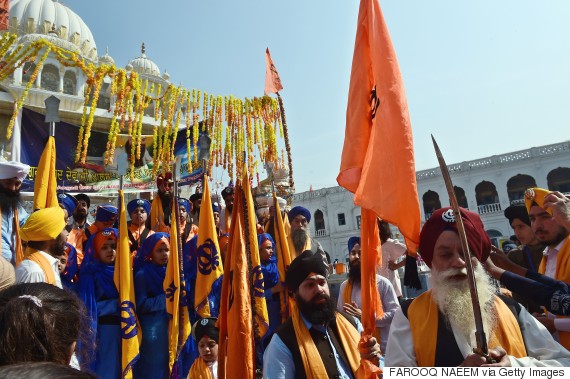 Sikh priests march at the Gurdwara Panja Sahib, one of Sikhism's most holy places, during the Vaisakhi festival in Hasan Abdal, about 48 kms from Rawalpindi, on April 14, 2015.

On the Vaisakhi day of 1699 (the first day of the month of 'Vaisakh' in the Sikh calendar), Siri Guru Gobind Singh Sahib, the tenth Guru, formalized the concept of Saint-Soldier by introducing the Amrit ceremony (the formal initiation ceremony). The initiates were instructed to keep the five K's: Kes (uncut hair), Kangha (a small comb), Karra (an iron bracelet), Kachh (a special short) and Kirpan (a sword).

They were given the title of Khalsa, meaning those whose life and spirit belonged only to the One Universal Creator and not to any ruler, tyrant or even a messenger of the Creator. The principle of One Universal Creator, a founding principle of the Sikh Faith, means that all human beings are children of the same One Creator, and are thus all equal, irrespective of their religion, gender, race, color, caste or the like.

Many Sikhs observe Vaisakhi by making pilgrimages and participating in rituals at traditional holy sites. Dancing, fireworks, and feasts among family and friends are also common practice for those in India, Pakistan, and around the world.