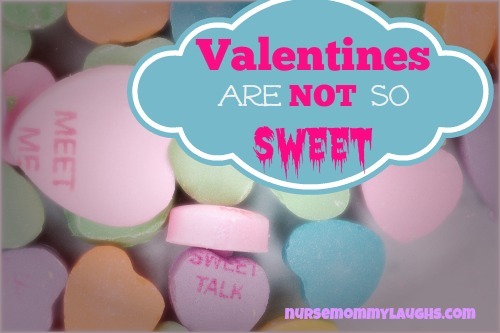 Do you remember a time when Valentine's Day was about young, sweet flirtations and chock full of excitement? And speaking of chalk...those dreadful tasting candy hearts were SUCH a hit. He gave me, "Be Mine!" Or better still, He thinks I'm a "Cutie Pie!" Ah, so creative, so deep, sheer poetry at its best!

And do you remember making Valentine mailboxes out of your dad's big-footed shoe box, so your loving suitors could cram bountiful love letters and joke cards into it? Then ever-so- carefully, you covered your romantic, dowry trunk with red and pink construction paper hearts and lacy doilies with thick white paste - the very glue that one kid in first grade secretly ate off the stick whenever the teacher faced the chalkboard - and if memory is accurate, the paste (and the boy) smelled like peppermint.

When I was in second grade, another boy even cut off his ponytail and put it in my Valentine's box. I know many of you are thinking, "Oooh!" But it was this boy's kind gesture which first taught me about crushes. Looking back, I hope his mother didn't freak out when he came home from school missing his hair, but I digress...

Now as adults who have been brained washed by mass marketing and societal pressures, Valentine's Day has morphed into elegant dinners, aromatic bouquets of crimson roses, shiny heart-shaped boxes of fine chocolates the size of your head, and diamonds...oh, yes, the diamonds! But do we really know how and why this beautiful holiday for lovers came to be?

I went to my most reliable source on the internet, Almost-the-Truth-Apedia, and searched for the history of Valentine's Day. Now if you are faint of heart, or can't talk about lab dissections at the dinner table, you might not want to research this topic. I would like to summarize what I learned, so you can see how far our demonstrations of love have come over the ages.

Valentine's Day started as a darling, little Pagan holiday called Lupercalia. This Roman festival held in February always began with an animal sacrifice; thereafter, the men would remove the animals' skin and then slap young women with bloody, skin strips. (I did not make this part up!) This was to protect their women from curses and increase fertility. Charming.

In third century A.D., the Roman Emperor Claudius II decided all this festival love stuff had to go, and banished the Pagan festival, and also all future marriages and engagements. He felt his army would be more aggressive if they weren't homesick for loved ones.

However, a priest named Father Valentine ignored the Emperor's rulings and secretly married young lovers. This occurred until the Emperor found out and threw Ft. Valentine in jail. Of course, the priest fell in love with the prison guard's daughter, and on the day of his execution, February the 14th, he passed a note to his beloved, which read something like...

"Sorry about the beheading... I think you're great... Signed, Your Valentine."

After a commercial break, someone high-up in the church felt bad about killing Father Valentine, so they declared him a Saint, which was a pretty good way to make up to his family for the head-chopping incident. Yet, it's the same old adage: Take a life, a touch of remorse, and then make amends by dedicating a statue to them. Get it right the first time, perhaps?

So as you are picking out the perfect gift for your love, my advice is you might want to steer clear of the whole Roman tradition; and if diamonds aren't in your budget, a jar of that sweet, peppermint glue could take your beloved back to a time when people really knew how to woo and pursue!

Be still my candy heart!