One snowy February the 13th when I was in fourth grade, we were decorating shoeboxes to hold all the valentines we would receive the next day. Outside, huge, lacy snowflakes fluttered down. As I pasted a lace doily onto my work-in-progress, I had the feeling I was in the middle of a wonderful snow globe -- only with red hearts and ribbons. Just then, Doug Worsley touched my shoulder. I turned around and he was holding a piece of red ribbon. "Terrell," he asked shyly, "would you please tie this into a bow for me? I don't know how to tie a bow very well; I mean, to make it, you know, pretty."

Now, I was used to boys being on another planet: the planet of no manners, icy snowballs thrown at cars or people, the planet of chasing girls and pushing them down in snowdrifts and laughing. I found not one redeeming quality in boys, until now. Now here was Doug, a handsome blonde kid, holding in his roughened hand a little satin ribbon. He held it out to me helplessly, and his blue-eyed earnest expression melted my heart. I took it from him and tied it expertly, as we girls have been doing forever, and handed it back to him. We were both smiling, and I looked past him again at the huge snowflakes drifting down. That one moment made my Valentine's Day, even though it was the next day. When I think of it, it has made my Valentine's Day ever since.

Because the next day was a real bummer. This was in the days when you didn't have to give one to everyone in your class. You gave a valentine to girls and boys you liked, and among the eight or ten you delivered into those carefully-prepared shoeboxes, one might possibly be to someone you had a little crush on.

My desk was next to Terry Taylor's, the prettiest girl in our class -- and in the whole school. Not only was she pretty, but she was very smart and very sweet. Terry opened the contents of her Valentine box and started trying to fit all the valentines onto her desk. "Well," she laughed, "I guess I'll have to stack them instead of spread them out!" Everyone in the class had given her a valentine.

I myself had four valentines, which covered a fraction of my desk. I have no memory of how many valentines other kids got. I didn't even look at Doug's desk. I just kept comparing my pitiful haul with Terry Taylor's and wondering where I had failed socially. I gazed out the window for support from Mother Nature. It had stopped snowing and everything seemed dull and gray.

The only thing that mitigated that dreadful experience was coming home to my family, having a cozy dinner together and hearing the door bell ring, promising a valentine surprise. Sure enough, on our doorstep were two envelopes, one for me and one for my sister Irene, with candy hearts inside and handmade valentines from my next door neighbor Nancy Streator, who was almost ten years older than I.

It made Valentine's Day all right again. There was still magic and kindness to be had.
Who knows what memories are going to stick with us as we go through this life? On this particular subject, somehow I decided to place big snowflakes and a tender moment with a boy on one side of the bummer experience, and then bracket it on the other with valentines from Nancy, thereby scoring two positives to one negative.

I have no idea what happened to Terry Taylor (a tiny part of me hoped that she grew ugly, but only a tiny part). But I blogged about this on my website (thatwentwellthebook.com), and imagine my surprise when a comment appeared. "I am Terry Taylor's husband, and in case you were still hoping she turned fat and ugly, I am enclosing a photo." 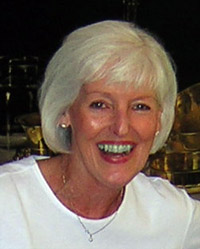 She'll still get all the valentines in the class! I could slug her, I tell you ...

Terry and I have been corresponding ever since. I have forgiven her for being drop dead gorgeous. And I came to find that even the old friends you envied most have enough sorrow and challenges on their plates to bury them. I think if we knew them well, and they cared to share, our hearts would open and hurt for them just as our hearts hurt (most of the time) for ourselves. Terry lost that wonderful husband last year to a surprise cancer. He was gone two months after the diagnosis.

We finally met for lunch near her home in Walnut Creek. 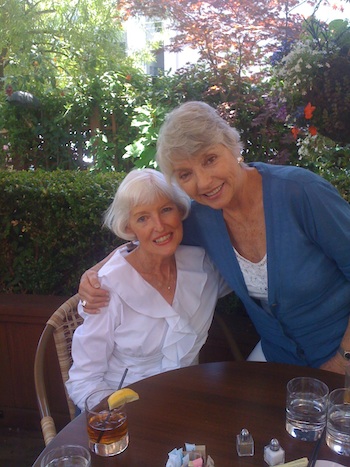 We went down memory lane, and laughed and hugged and knew that we never get over our childhoods. For good or bad, they mold us. Terry brought me a little silver charm. It was a heart, and engraved around the edge was the word "Friends." You can hardly slug a woman like that.