Yesterday, Sandra Lee announced she had breast cancer and was going to have a double mastectomy. Her cancer was detected via routine mammogram. Twenty years ago, it's unlikely Lee would have announced her diagnosis and surgery, or knew to get annual mammograms. Thanks to the Susan G. Komen Foundation, Breast Cancer Walks, the pink ribbon and free mammograms, breast cancer awareness has reached mass proliferation.

This week, to coincide with National Women's Lung Health Week, the American Lung Association's Lung Force initiative is raising awareness about an even bigger, deadlier health concern for women. Lung cancer is the number one killer of women. Twice as many women die of lung cancer than all other cancers, and yet only one percent of women have this disease on their radar. The long-held belief is that only smokers get lung cancer and that getting sick is just a consequence of that choice. Not true. Two-thirds of new cases are in women who quit many years or never smoked.

Valerie Harper is among them. She was diagnosed with the disease in 2009, and had surgery to remove a two centimeter tumor in her lung. She went public with her condition in 2013 when a recurrence appeared in the meninges membrane around her brain. Her oncologists gave her three months to live. Harper decided to use what time she had left to share her story and raise awareness about lung cancer. Two years and four months later, she's still doing the good work.

Harper spoke about her cancer fight at a Lung Force event in New York City yesterday. She looks fabulous and told the audience she feels great. Tarceva is keeping her disease at bay. During a panel discussion, she was vibrant and laughing, full of energy and warmth. You'd never think this seventy-six year old has cancer. After the event, we talked about her health and goals. 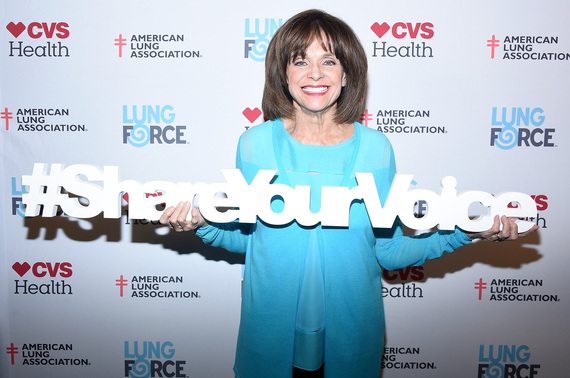 VH: Turquoise is the color of air, of breath. The swirl is like the movement of air. We want people to breath freely, and to blow away cancer. More women are dying of the disease than all other cancers, including breast.

How were you originally diagnosed?

I needed an operation on my wrist, but before they let me on the table, they said, "You have to get a chest X-ray." When my doctor saw it, he said, "It could be nothing. I could be something horrible." I was shown the X-ray and saw a little round moon on the top lobe of my lung. I thought, What are you doing there? I had surgery and that was it. No chemo, no radiation. Four years later, I was at rehearsal one day, and I got a headache and couldn't remember my lines. It felt like Novocain on my head. It turned out to be a tumor in the meninges, a recurrence of the original cancer. People have asked me, "Aren't you mad at your doctor for not doing chemo the first time?" I'm not. I was cancer free for four years and I'm doing fine now. I do yoga and get acupuncture. I listen to my brilliant doctors. I've been lucky.

Had you been getting regular scans?

Yes! The initial lung X-ray saved my life. Since then, I get scanned every six months. That the tumor turned up in my meninges was totally random. I think everyone, rich or poor, with insurance or without, should get scanned. The importance of annual mammograms is ingrained. People should think the same way about annual lung screenings. Use your intuition. If you feel something isn't right, get checked.

According to the American Lung Association, a woman dies of lung cancer every eight minutes. In 2015, 71,000 U.S. woman will die of the disease.

It's entirely possible there's a lung cancer gene, too. We need more money for research to find out. That's the goal of the Lung Force campaign. Also to spread the word far and wide, coast to coast, so awareness is as common as pizza. Women are dying in alarming number but only one percent are concerned. We can't let this be. No one deserves cancer. If anyone tries to blame a patient for getting sick, screw them. Stigmatizing an illness keeps people and organizations from donating to find a cure. All three of my mothers had lung cancer. My mother, my father's wife Angelica, and Nancy Walker, Rhoda's mother. I've been surrounded by it. I realized the other day that I should have been getting screenings earlier. I should have known better. But people are ashamed and afraid to talk about lung cancer. That has to change.

Donate to Lung Force to fund research, treatment and prevention of lung cancer when you check-out at a CVS Pharmacy, or online.