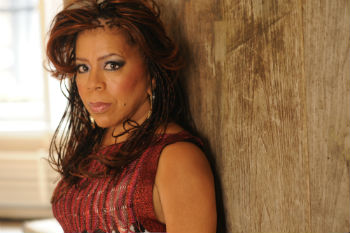 Ashford & Simpson are one of the most successful songwriting duos of all time. With an unprecedented catalog of hit songs, 22 gold and platinum records and members of the Songwriter's Hall of Fame, they have written and performed songs that have become the soundtrack of our lives. Whitney Houston, Marvin Gaye, Teddy Pendergrass, and Diana Ross have all soared on the charts to their melodies.

Last August, Nick Ashford died at 70 from throat cancer and Valerie Simpson, his wife of 36 years, was forced to pick up the pieces and write chapter two. It's only fitting it would start with music. For the first time in four decades, Simpson has released a solo album titled Dinosaurs Are Coming Back Again. The album was written and recorded 11 years ago, but Simpson said it never seemed just right. She realizes, though, that things happen when they are supposed to.

"My honey put his heart and soul and some powerful lyrics into this album for me," Simpson said. "I think Nick would be very pleased and proud of how it came out."

Their relationship reads like the lyrics of a love song. In 1964 Ashford moved from Michigan to New York to fulfill his dream of becoming a dancer. However, he quickly discovered that he wasn't as prepared for the Big Apple as he thought. His money ran out, and for a few months he was homeless. While in New York, Ashford met 17-year-old Bronx-native, Simpson. She sang in the church, and at the time her choir needed new songs. Together they discovered they had a knack for writing gospel songs. Word spread about their music, and one day a man came into the church, heard their songs and asked if they could also write love songs because he wanted to help them get published.

Their first hit was Let's Go Get Stoned, recorded by Ray Charles. Eventually the duo made their way to Motown and wrote some of the best-known songs of all time, including Ain't No Mountain High Enough, You're All I Need to Get By and Ain't Nothing Like the Real Thing. As performers they scored their own hits, such as their signature tune, Solid.

It wasn't romance from the start. For eight years Nick and Valerie shared a purely creative partnership, but their bond became too hard to deny. In 1974 they married. Life without her husband and best friend has been difficult for Simpson, but she is healing through music. Her favorite song off of Dinosaurs Are Coming Back Again, Love Never Dies, sums up her feelings on moving on, but never forgetting the past. No doubt she will rise to the occasion. As she confidently said, "I didn't know I was short, so I acted like I was tall." 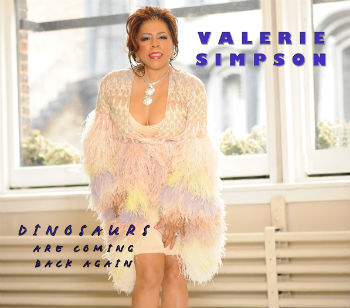 You've talked about Nick's passing as just "one step at a time." What has been the most difficult part?

Just realizing that you had something that was so perfect. I was so fortunate to have someone who allowed me to be totally myself. He would say he didn't feel married. Even though we were together all the time, there was a great freedom in the relationship. Yet he was somebody who would hold my hand in the car. He was so romantic. A very romantic man. He was so good looking and just such a great guy. It really was kind of storybook. I didn't think about it at the time. I miss the companionship.

I just reach out. In transition I think the spirit goes somewhere, but I don't think it leaves. I assume he would look after me for as long as I need. So, I know he is on my shoulder or in the wind that crosses my breath. I'm not afraid to reach out to that or speak to it.

Even though you two had been writing songs together, it took eight years before a romantic relationship began. When did you start to look at him in a different way?

It was at a function--one those dinners where they serve that chicken. Then they had a band playing. We danced on a slow dance. Even though I always called him my brother, suddenly he didn't seem like my brother! There was something different. Then we got in the limo, and he said, "Do you want to talk about this?" Then we took a walk in Central Park and fell into each other's arms.

It's weird because I was married for about two years to a musician and Nick was the photographer at the wedding. I'll never forget--he had on a beige suit. He was taking pictures of me and something just didn't seem right.

You were thinking, "Excuse me, I have a groom over here. Take his picture too!"

Yeah! I'll never forget that feeling. I didn't even know what was wrong. The marriage only lasted about two years. Nick and I were writing songs together, but that husband, the two-year husband, always said something was going to happen, but nothing was happening! It was like he could see it coming.

Your new album is called Dinosaurs Are Coming Back Again. The title was inspired by sitting in a record executive's office and feeling like dinosaurs. One of the reasons you didn't release it 11 years ago was because you weren't happy with your vocals. What didn't you like?

I don't know. I just wasn't happy. Even now to bring it out, I've changed a few things. When you're a producer and an artist you're very critical of yourself. I like to produce other people, but I'm not that good at producing myself. I just couldn't get happy. Now, for whatever reason, I can accept it. What I don't like, I can accept. Acceptance is a wonderful thing.

Which is the message in the song Trying to be Perfect off the album. The lyrics are: "The image isn't real. What we show on the outside isn't what we really feel." How do you think people perceive you? Is it different from who you really are?

I'm just now realizing that the perception that people have of me was based on two people. I don't think they know who I am now. I've realized now that Nick was a great filter for me. He would shut me down when I was going too far. Now I have no shut-down. There's no one to keep me in check.

What would you like for people to know about who you are?

I guess I'm in a state of becoming. Even though I've had a full career and I've been around a long time, it's like dinosaurs are coming back. It's all new. I'm having to be on my own and seeing how exciting life can be now. It's a question of being more fearless and saying, "What difference does it make; just go out and do it." I don't want to second-guess myself so much now. I feel like I've had enough success, so even if something falls apart, it's okay.

One of the songs you wrote was I'm Every Woman. Are you every woman?

I have that mood or that song will reinforce a weakness. When you're not feeling like you are, you put that on and then you get that va va voom feeling.

You bought a bench in Bryant Park in New York City and inscribed on the plaque: "Nick Ashford slept here." Even though he was homeless for several months, he kept going. His determination led to the song Ain't No Mountain High Enough.

That was actually him walking down Central Park West and saying the buildings were not going to steal his dream. He was going to conquer New York. Ain't No Mountain High Enough. Then it turned more love as we started working on it. The inception came from the thought of, "I can conquer anything."

Where did your determination come from?

It almost feels like things fell in my lap. It wasn't like I was expecting this to be my career. It just happened to me. Nobody in my family was musical. I had no idea you could be a songwriter and make a living at it. It was all discovery. It was all just thrown at me.

If you hadn't made it as a songwriter, what would you have done?

I didn't get that far. I was only in high school when I met Nick. I hadn't even thought of what I'd be.

You once said, "Sometimes you don't know when your turn has happened. I'm so glad that when we got our chance to express our talent, we were able to create a body of work that has lasted." When did you feel you had made it?

I can't put a date on it. I think when we produced the first Diana Ross solo album. That was a big step for us. It was the total umbrella--producers, songwriters and having a great artist to work with. Also, having someone who believed in you. At that point Motown split albums up [with different songwriters and producers], so for them to decide that we could do this, it was a vote of confidence.

What is success to you?

Just knowing that the music is going to be around. That's the success that I didn't even expect. I didn't know that these songs would have this kind of longevity. People write songs every day and then you forget about them six months later. Even if I didn't want to write another song, I would be fine because [the others] are still going.

Let's talk about some of your songs. How did Ashford & Simpson's signature song, Solid, come about?

Nick just came in off the street and said this guy who liked to walk around in cognito came up to him and said, "Yo, solid, man. Solid." He said that was how he felt in our relationship. Solid. As a rock. We sat down and wrote. If you feel the thought in your soul, then it's easy for it to come out.

Was there a song you wrote that really surprised you that it became a hit?

You're All I Need to Get By.

I would certainly hope he would get another shot at it. A job this big takes time. Unless something ridiculous happens, he deserves another chance. I get so upset when people say he's flip flopping. What is wrong with growing into knowledge? If you didn't know something before and you come into an awareness, what is wrong with that? Should you just stay your same, old dumb self? I hope not.

What do you think is the biggest issue facing our country today?

The unemployment situation. People have lost hope. It's just scary. The scary part is those that have are afraid, so they are not spending the way that they should. There is money that is not being spent because people are hoarding. That's scary. If we could all just relax and say, "Let's just do the best we can and try to share what we have--those that do have--I think it would just make things a lot easier. There is a lot of fear out there.

Right now you feel like you're beginning a whole new life. What would you like the future to hold for you?

I'm enjoying finding my voice. I only hope that someone will want to hear my voice. I'm just hoping that I can be as free and have as much fun and inspire as much as possible. That will fine. That will be enough.

For more on Valerie Simpson and to purchase "Dinosaurs Are Coming Back Again," visit ww.valeriesimpson.net