When the wife of former French president Giscard d'Estaing was asked what she wanted to do as France's First Lady, Anne-Aymone Giscard d'Estaing said: "To no longer be one." Similarly, when the second wife of former French president Nicolas Sarkozy was asked about the role of First Lady (Sarkozy has been married three times), Cecilia Sarkozy told the press: "I don't see myself as a First Lady. That bores me. I am not politically correct."

With the inauguration of Francois Hollande, France will have a new, equally "politically incorrect" First Lady -- sort of. Valerie Trierweiler is Francois Holland's partner -- a savvy and accomplished 47 year-old reporter and twice-divorced mother of three teenagers who downplays her unmarried status to Hollande. "I'm not sure it will come up all that much," she told Agence France Press. "Maybe when visiting the pope? Frankly, it is not really something that bothers me. This question of marriage is above all a personal matter in our private life."

Trierweiler, in her conviction to keep private matters out of the public domain, is irrefutably French. (As Bill Maher once quipped: "The French have weird ideas about privacy. They think it should be private.") Ditto with respect to her suggestion that her marital status has any bearing on Hollande's ability to govern his country. And that's because despite occasional blips on the nuptial radar, more than 50 percent of French people choose cohabitation over marriage, even when when little bébé comes into the picture.

Essentially, the institution of marriage not an institution in France. For socio-cultural reasons that go back centuries, tying the knot doesn't matter to the French the way it does, profoundly so, to Americans, because as France Prioux, director at INED (Institut National d'Etudes Démographiques) once explained to me: "There is a certain revolt in France against established institutions. This is part of the French nature, the French spirit. There is no social disapproval in France with not being married. This is the case across the entire socio-economic spectrum. People now ask: 'Why marry?'"

History books and the press abound with stories about the "irregular" connubial relationships of French presidents, from Mitterand with his long-standing extra-marital relationship, to Francois Hollande himself. Francois Hollande and Segolène Royal, France's first woman presidential contender, cohabitated for decades and had four children together before they separated.

Royal, like Trierweiler, conspired against many things Anglo-Saxon. Her ability to seamlessly navigate the world of motherhood with the demands of the political arena and the eternal need to find just right lipstick was something women all over the world could appreciate, but it was her sex appeal and her unconventional relationship with Hollande that got the outside world hot and bothered. Her mélange of femininity and political power were so far off the American radar that Salon Magazine suggested she lives "in a parallel universe." And Andrew Hussey nearly gushed in The Guardian: "Royal's power is sexual...she is flirtatious, stylish and feminine in equal measures... Is she Marie-Antoinette or Marianne?" Like many of her French sisters, including Trierweiler, she was a little bit of both.

When it came to her relationship with François Hollande, Royal frequently called herself a "free woman." And when their relationship began to show signs of strain, the couple's personal issues were not perceived as a fatal flaw or a point of great public import. When asked whether they were a couple, Mr. Hollande simply replied: "It is not for us to either confirm or deny. Our lives belong to us.'" Everyone in France seemed to agree.

This kind of thinking expressed by political figures is nearly unthinkable in America, where the presidential couple is a model on a grandiose scale of what constitutes a good couple: Not two separate individuals but One Couple, Indivisible, the First Lady being iconic here. She is a figurehead of rectitude and propriety; a cheerleader and a den mother who, even with her personal commitments to social crusades, must sublimate a certain amount of personal independence or iconoclasm for the sake of least impersonating a good political wife. Veering from this norm rubs against the American grain in a big way. I'm reminded of Teresa Heinz, Senator John Kerry's wife, during Kerry's bid for the presidential election. Heinz fell right into this gray zone. She was independent, quirky, sophisticated, iconoclastic and so unapologetically sensual that the American media didn't know what to make of her. As one reporter sniffed, "She's too European."

For now, the biggest open question about Valerie Trierweiler and Francois Hollande's marital status revolves around, as The Telegraph called it, the "protocol conundrum" they may face visiting Middle Eastern countries like Saudi Arabia. But even this might be much ado about nothing. As a French journalist told me, "The Arabs have known the French well for millennia. I'm not sure anything we do can surprise them. When a king of some Gulf Emirate comes to Paris, he usually brings dozens of wives with him -- and no one checks if they are all legally married to him."

In short, the separation of personal and private life in France is tantamount to the separation of Church and State. Perhaps that's best expressed by out-going French president Sarkozy, who once told Le Figaro: "In France you elect a candidate, not a family."

Trierweiler's new role has thrust her into the public spotlight. Check out our slideshow of France's new "First Partners" below. 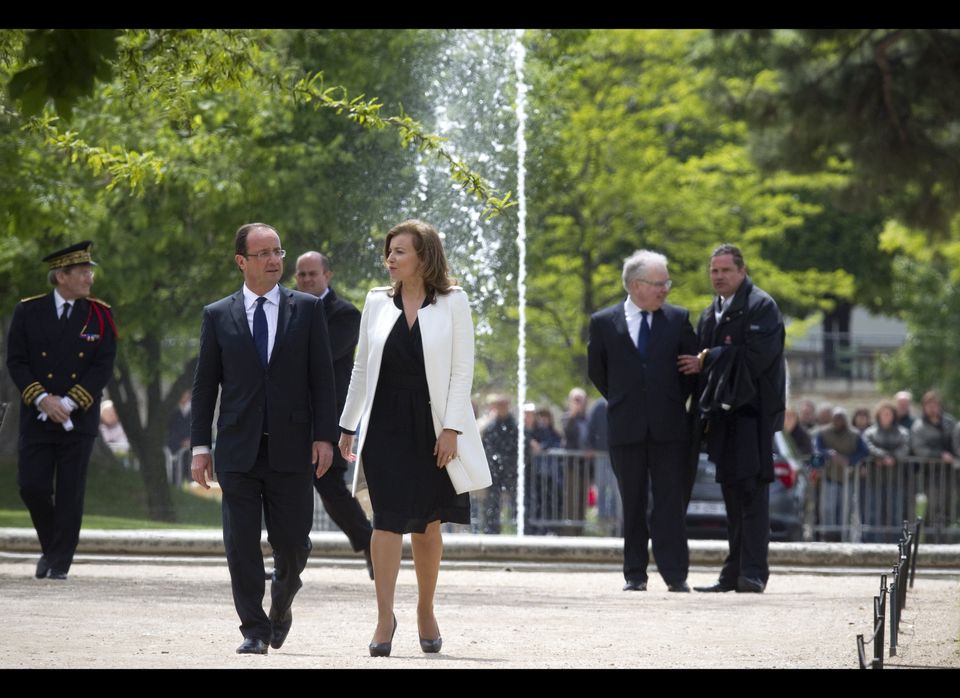