When it comes to making money, college graduates have a huge and growing advantage over high-school graduates -- but that's mainly because the value of a high-school diploma has plummeted.

Though college makes sense in the long run, tuition keeps getting more and more ridiculously expensive, making it even harder and riskier for the have-nots to make up lost ground.

The difference in earnings between a high-school graduate and a college graduate hit a record high last year, after doubling between 1979 and 2013, according to new data compiled by the Economic Policy Institute, a think tank focused on labor issues. The EPI compiled the numbers for The New York Times and shared them with The Huffington Post.

A college graduate now makes about 1.8 times as much as a high-school graduate, up from about 1.4 times as much in 1979, according to the EPI data.

“Wages have been pretty flat across the board, and that includes college wages,” said Elise Gould, an economist at EPI. “The only reason that the [college] premium has gone up at all is because wages for high-school graduates have actually fallen.”

Why has a high-school diploma gotten so cheap? Over the past few decades, the inflation-adjusted value of the minimum wage has fallen. Many well-paying jobs traditionally performed by high-school graduates have either been replaced by automation or exported overseas. Workers have lost bargaining power as unemployment has risen and union membership has declined.

Once you take a lifetime of extra earnings into account, the cost of a college degree is negative $500,000, the NYT claimed, making it "economically irrational" to choose to skip college, in the NYT's words.

This chart, from a study published last week by David Autor, an economist at the Massachusetts Institute of Technology, illustrates the lifetime value of a college degree. You'll notice that it is, not shockingly, much lower for women: 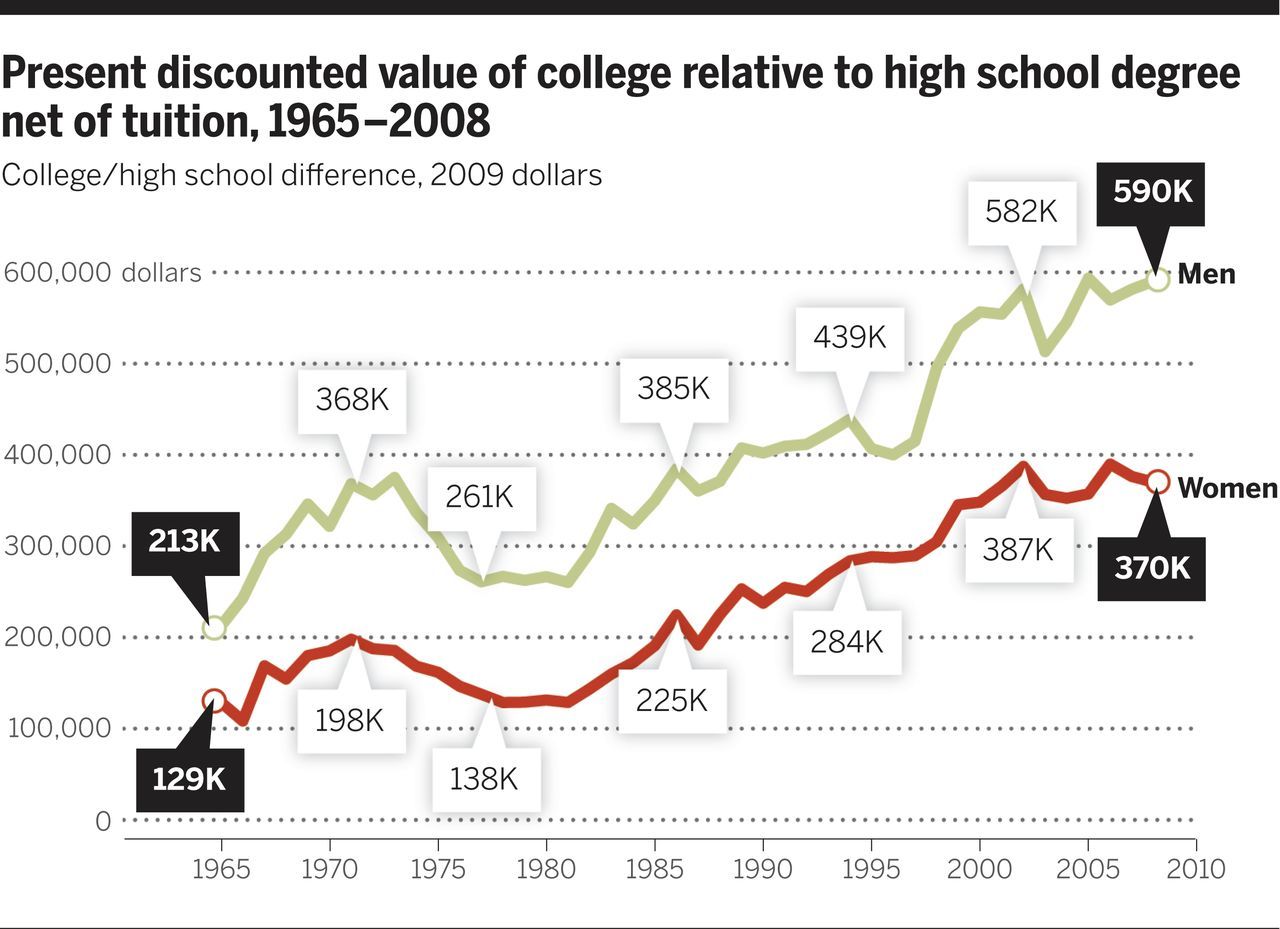 But these numbers are averages. Not every college graduate earns the average, which makes the investment in college a little riskier than it seems at first glance, the EPI's Gould noted.

A 2010 study from the Center for American Progress found that a substantial minority of young college graduates actually earned less than their high-school educated counterparts in 2009.

“The wages of college graduates vary greatly, from very low to very high,” Gould said, in part because some people college without important tools like unpaid internships and useful connections.

Meanwhile, the up-front cost of a college degree has been rising rapidly, faster than the rate of inflation, making the "sticker shock," as Autor called it, even greater for low-income students. The price of college tuition jumped 12-fold between 1980 and 2012, according to Bloomberg.

Outstanding student-loan debt, meanwhile, has soared to more than $1 trillion, a burden that the Consumer Financial Protection Bureau and others have called a drag on economic growth.

Such hurdles help explain why there seems to be a shortage of college graduates, which could keep the income gap between college and high-school graduates growing in the future. The number of people -- particularly men -- entering college hasn’t budged much since it reached its peak in 1974, according to Autor. In earlier decades, the number of males entering college grew rapidly, thanks to programs like the GI Bill and an interest in avoiding being drafted into the Vietnam War.

Autor's paper suggests getting the government involved in getting more students into college. It wouldn't be the first time we’ve used public policy to help the work force adjust to a changing economy. We started a public-school system as the industrial revolution made a farming-based economy obsolete, and we pushed students into high school as automation rose in the early 20th century.

Some help from the government could make college less of a risky investment for students and families on the edge.