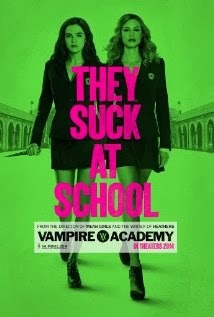 The teaser for a forthcoming movie called Vampire Academy reads,

"They Suck at School."

This is an ingenious triple entendre.

"Attention must finally be paid to such a person,"

Vampire Academy is based on the young adult series by Richelle Mead, of which six volumes have already been published (in addition to Vampire Academy, they are Frostbite, Shadow Kiss, Blood Promise, Spirit Bound and Last Sacrifice) and the poster of the film, which locks onto you like a drone as you exit the subway, features the two fetching leads, Zoey Deutch (who plays Rose Hathaway) and Lucy Fry (in the role of Lucy Dragomir). Okay students are always admonished to "stick with the winners," and stay away from those kids who are bad news, but even if these girls are at the bottom of the class, it's obvious they won't have any trouble honing in on their prey. The promo for Vampire Academy is almost as successful as that for a l968 film called Succubus, which lured filmgoers with the prospect of sexy paranormality. The difference is that the succubus doesn't suck at school or anywhere else. According to Merriam-Webster Online, it's merely

"a demon assuming female form to have sexual intercourse with men in their sleep."

This was originally posed to The Screaming Pope, Francis Levy's blog of rants and reactions to contemporary politics, art and culture}