Archaeologists working in northwestern Poland have an explanation for a series of ancient graves in which skeletal remains were found with sickles and stones across their necks--a practice traditionally used to prevent people suspected of being "vampires" from rising from the dead.

Previous research suggested that the Drawsko County graves contained the remains of foreigners, whose outsider status led others to brand them as "vampires." But new research conducted by the University of South Alabama archaeologists suggests that the "vampires" were actually members of the local community who had died after contracting cholera.

"We were surprised to learn that the Drawsko 'vampires' were, in fact, local to the area," Dr. Lesley Gregoricka, a bioarchaeologist at the university and the study's lead author, told The Huffington Post in an email. "We expected that these individuals were targeted for deviant burial because of their status as outsiders to the community." 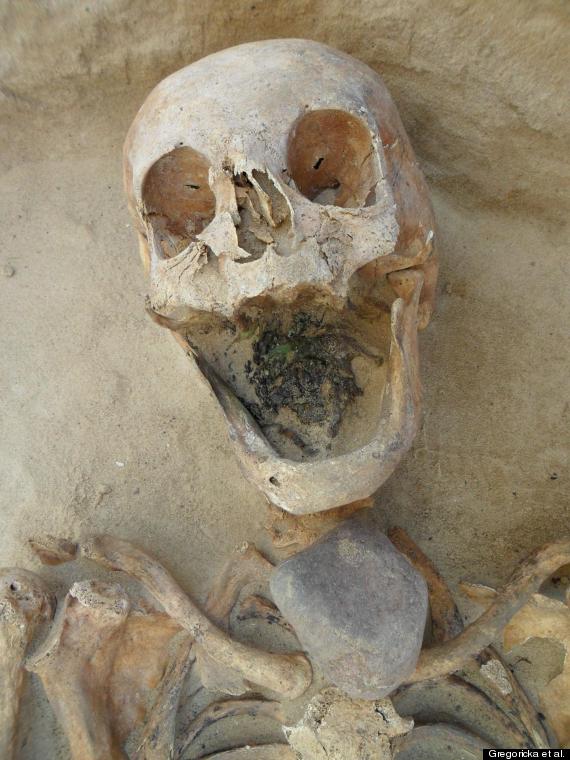 The skeleton of a 40-something female, found with a stone placed atop her throat.

For the study, Gregoricka and her colleagues tested the molars of 60 skeletons--including six "vampires" from deviant burials--dating back to the 17th and 18th centuries. All of the skeletons were unearthed between 2008 and 2012.

The researchers measured levels of the element strontium in the skeletons' dental enamel and compared them to the levels found in the bones of modern local animals. Since strontium isotope ratios vary by location, the researchers were able to determine that all of the "vampires" had grown up in and around Drawsko County.

This led the researchers to hypothesize that the "vampires" had been given their strange burials because they had succumbed to cholera after an epidemic swept through the area during the 17th Century.

"People were unaware that cholera was a bacteria spread through contaminated drinking water--there was no scientific understanding of how infectious disease was spread," Gregoricka said in the email. "Instead, because they couldn’t explain it, they attributed cholera to the supernatural–-and specifically, to vampires."

What do others make of the new study?

Dr. Kristina Killgrove, a University of West Florida anthropologist who was not involved in the study, told Discovery News that while "cholera certainly could be an explanation," it's unlikely that the scientists will be able to confirm their hypothesis.

“Unfortunately, cholera leaves no marks on bone, so it's not possible to tell by looking at the skeletons whether or not they suffered from the disease,” she said.

The research was published online on Nov. 26 in the journal PLOS ONE.