"I can't change the fact that my paintings don't sell," Vincent van Gogh reportedly once said. "But the time will come when people will recognize that they are worth more than the value of the paints used in the picture." It is, of course, a terrible shame van Gogh never lived to see the profound impact his art had on the world at large, forever transforming the way so many of us gaze upon the night sky. 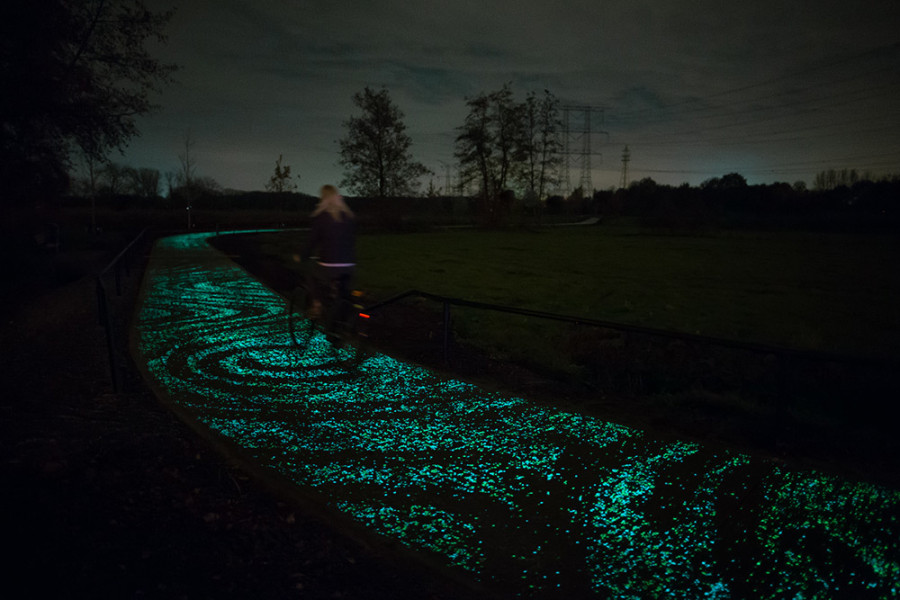 Van Gogh's wildest dreams probably couldn't prepare him, for example, for the Van Gogh-Roosegaarde Bicycle Path, an enchanting living artwork newly unveiled by Studio Roosegaarde. The kilometer-long path is adorned with a special paint that charges during the day and glows after dark. It runs through the Dutch province of Noord Brabant, where van Gogh was born and raised.

The stunning feat, at the intersection of art and technology, mimics the ecstatic energy and swirling movement of van Gogh's original. Each illuminated fleck operates like a brushstroke, adding a small yet crucial element to the whirling, unfathomable whole. "It's a new total system that is self-sufficient and practical, and just incredibly poetic," designer Daan Roosegaarde told Dezeen.

A solar panel close by generates power to illuminate the painted surface. Some LED lights are embedded in the path as well, casting extra light especially in the case of foggy weather. The fairy tale bike path is the second of Roosegaarde's five-part Smart Highways project, which aims to create safe and environmentally friendly road networks. The first manifestation, "Glowing Lines," employed photo-luminescent paint to brighten the edges of the road.

Where art meets science and the past meets the future, Van Gogh-Roosegaarde Bicycle Path offers an illuminating (and illuminated) glimpse into the potential of public spaces. Best of all, the path is open all year round. Somewhere we hope van Gogh is smiling knowingly.