Glenn Beck has uncovered a plot! (Yes, another one.)

Turns out Van Jones, President Obama's green jobs czar, is going to coordinate a vast radical/communist/black nationalist takeover of our sweet, virginal land of liberty. Most diabolical of all, he's going to do it by organizing efforts to train and employ low-income people in private sector jobs. Don't you understand? They're going to take over from the inside! You know: them.

Can you talk me out of the crazy tree?! No. No, I'm afraid not. You've found them. Right in the last place they thought you'd look.

Jones was undercover for a while, collecting degrees from University of Tennessee at Martin and Yale Law. But then he became an advocate. A (shudder) community organizer. We all know what that means, right Sarah? 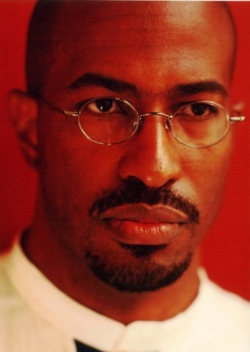 Recently he tried to throw tireless commie-hunters like Beck off his trail by writing a book--2008's The Green Collar Economy--that argued for saving the US free-market economy from stagflation by investing in green innovation, infrastructure, and industries, creating millions of jobs in the private sector. But don't be fooled. It was all in the name of bringing down The Man!

Here he is, talking about destroying capitalism by greening the economy:

Scary, right? You gonna trust this guy ahead of Glenn Beck? I didn't think so.

Of course, the shadowy Apollo Alliance ... are they Soros-funded? Probably! ... wants the government to support the evolution of a clean energy economy. Yeah, you heard right: They want the government to provide incentives to businesses to invest in green technologies and services. Needless to say, this kind of Stalinistic, top-down central planning leads only to disasters like the internet, the Interstate Highway System, the polio vaccine, and velcro. And, my god, flouridation. Don't forget flouridation.

The sinister plan was going perfectly well until the radios in Glenn Beck's teeth told him how much danger we're in. And thank Reagan they did!

Never be afraid to shout at the clouds, Glenn. They're looking at you funny.