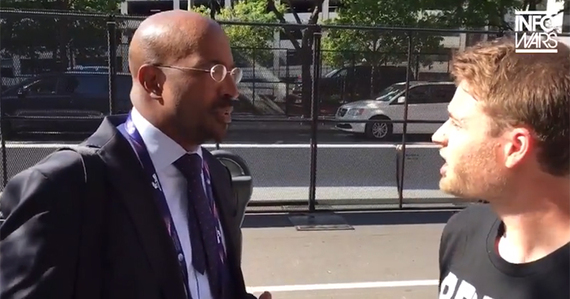 The ideological divisions afflicting the U.S. right now are so deep that it is difficult to imagine how we will ever have a functioning democracy. We cannot seem to agree on even the most basic values. Some people are trying to raise awareness about police brutality in the black community with the most uncontroversial slogan conceivable, "black lives matter." And yet they are roundly and belligerently misunderstood by otherwise intelligent people who insist on tacking an imaginary "only" onto the beginning of the phrase. (I don't know how else to interpret the retort of "all lives matter"). On the other end of the spectrum, after every high-profile mass shooting, liberals and progressives act like the problem of gun violence can be solved with background checks and bans on certain weapons (not that I'm against such measures). On these and so many other issues, it seems that the two sides are living in parallel universes.

In this atmosphere where partisanship is so extreme that our political representatives can barely keep the government functioning, we should hardly expect any sort of rapprochement between even more divergent perspectives. But we should always be ready to be surprised.

It is arguable that no one exemplifies right-wing hysteria more definitively than Infowars.com. Boasting headlines like "Obama/BLM Plan to Overthrow America Leaked," they represent an unrepentant anti-government paranoia, the appeal of which has been escalating ever since Obama was elected in 2008. Meanwhile, from the perspective of the far right, few people are perceived as more dangerous than Van Jones. He represented such a threat to the right, that when President Obama named him Special Advisor for Green Jobs in 2009, former Fox News personality Glenn Beck and his allies went on the attack, mounting a smear campaign that ultimately led to Jones' resignation. Of course, this is precisely why Carl the Cuck Slayer and his Infowars crew jumped at the chance to ambush Mr. Jones when they spotted him walking on the RNC convention grounds. What happened next, though, was that Van Jones taught us all a crucial lesson in bridging what would seem to be an unbreachable ideological divide.

What he did was really quite simple. He spoke from his heart. He refused to be drawn into a tediously familiar ideological back and forth. And, with genuine respect, intellectual honesty, and fierce compassion, he staked out a chunk of common ground on which they could both stand, and no one had to lose. It was (to borrow the word Mr. Jones used to describe our whole society) a miracle.