Following Vancouver's 4-0 loss in Game 7 of the Stanley Cup Final, the atmosphere downtown quickly went downhill. Anger filled the streets, fires emerged, cars were flipped and looting was witnessed, all reminiscent of a similar scene in that city 17 years ago.

Vancouver Mayor Gregor Robertson reacted to the violence with this statement:

“It is extremely disappointing to see the situation in downtown Vancouver turn violent after tonight’s Stanley Cup game. Vancouver is a world-class city, and it is embarrassing and shameful to see the type of violence and disorder we’ve seen tonight. The Vancouver Police and Vancouver Fire Department are doing an exceptional job under challenging circumstances to maintain control of the situation and keep people safe, and emergency crews are working tirelessly to assist those who were injured.”

Just two hours after the disturbances began, at least two people were injured, two police cars were burning, and some fires were out of control, The New York Times reported.

Photos are now emerging from the scene. Take a look at some of the images coming out of Downtown Vancouver this evening.
Learn more and see video from the riots here. Scroll down further for more from the AP.

"We have a small number of hooligans on the streets of Vancouver causing problems," Vancouver Mayor Gregor Robertson said. "It's absolutely disgraceful and shameful and by no means represents the city of Vancouver. ... We have had an extraordinary run in the playoff, great celebration. What's happened tonight is despicable."

Police said they had reports of four stabbings, though spokeswoman Const. Jana McGuinness said she couldn't confirm them.

Officers from around the region flooded into downtown, and Robertson said things were getting under control, but the images and atmosphere that persisted late into the night suggested otherwise.

It took about four hours before downtown quieted again.

While Robertson said there had been no fatalities, ambulances appeared to be having trouble getting inside the zone to help the injured. TV images showed at least one woman mopping blood from her forehead.

"You don't ever hope for a situation like this," McGuinness said. "You celebrate the good times and you prepare for the bad times and that's exactly what we've done. Unfortunately, the tables have turned tonight. ... We will have to sit down and evaluate exactly what happened here. It's going to be a black mark for a very, very long time."

At a Bay store, looters were seen grabbing T-shirts and anything else they could get their hands on. Young women were seen escaping with MAC cosmetics, with one carrying out part of a mannequin. The landmark building was filling with smoke as people, their faces covered in bandannas, continued the violence.

The Bay became a target, with windows smashed to allow looters to get to the expensive Coach and Burberry purses. Merchandise went flying into the street. Women rampaged through the main floor makeup department, tossing each other products and squealing in delight.

Another fire erupted nearby in an area littered with abandoned Canucks memorabilia and hand-lettered signs expressing support for the team.

The violence appeared to start when fans set fire to a stuffed bear decorated to symbolize the Bruins. Others sang a drunken tune as they danced on an overturned vehicle.

"It's terrible," Canucks captain Henrik Sedin said, shaking his head. "This city and province has a lot to be proud of, the team we have and the guys we have in here. It's too bad."

The looters turned their attention next on a Future Shop store a few blocks away, smashing windows and flooding up the stairs to the second-floor store, only to turn around quickly. One witness said police were at the top of the stairs.

Sears and Chapters stores were also looted, their glass fronts smashed. For many, the ugly chaos made the Cup loss an afterthought.

"What I've seen is a complete disgrace," said Beth Hope, 28, who is originally from England but has lived in Vancouver for two years. "I'm a Canucks fan, but my jersey's in my bag. I'm ashamed to be a fan right now."

Hope said she saw a parkade on fire and cars ablaze.

"It's insane, it's absolutely insane," she said. "What's the point? Our team lost. Why destroy your own city? I'm afraid."

NBA star Steve Nash, from nearby Victoria and the brother-in-law of Canucks forward Manny Malhotra, sent a Twitter message imploring the fans to stop the violence. "We're a great city and have a lot of class. Our team is great and our championship will come. Soon," Nash wrote.

Robertson praised the police and firefighters and asked people to stay away from the central downtown area.

"It is extremely disappointing to see the situation in downtown Vancouver turn violent after tonight's Stanley Cup game," Robertson said. "Vancouver is a world-class city and it is embarrassing and shameful to see the type of violence and disorder we've seen tonight.

"The vast majority of people who were in the downtown tonight were there to enjoy the game in a peaceful and respectful manner. It is unfortunate that a small number of people intent on criminal activity have turned pockets of the downtown into areas involving destruction of property and confrontations with police."

Tear gas mingled with the stench of acrid smoke and stale beer as riot police, truncheons drawn, moved in to quell the violence, pushing crowds away from the burning cars.

Later, police cars also were set on fire. At one point, police were using flash-bangs – grenades that are designed to distract and disorient, rather than injure – to try to break up the mob.

Flames leaped from at least two flipped vehicles in the middle of trash-strewn streets, filling the downtown core with heavy black smoke in the moments immediately following the game.

"I heard a loud noise and turned and there was a car being stomped on by a bunch of guys," 18-year-old witness Brandon Sinclair said about the first few moments of violence.

Television images showed a large fire burning inside a parking garage, but it wasn't clear what was ablaze.

A small group of rioters appeared to be at the heart of the action reminiscent of a similar scene that erupted in the city in 1994 following the Canucks' Game 7 loss to the New York Rangers.

McGuinness said those responsible for this latest damage had an average age of 22 or 23 and were downtown specifically to wreak mayhem, not to watch hockey.

"They've embarrassed our city and taken away that pride that we had," she said.

For two weeks, the city hosted thousands of fans in areas set aside with gigantic screens for watching the games as the Canucks progressed through the playoffs. Police officers high-fived passers-by, and spectators were well-behaved, win or lose.

McGuinness said police aren't blaming alcohol consumption – there was more during Game 5 on Friday night. But she also bristled at the notion that the force's so-called meet-and-greet strategy was misguided.

"I would completely disagree that there is complacency," she said. "We are very aware in a crowd situation that things can change. We watch for those flashpoints in a crowd."

When flames erupted from an exploding car, bystanders ducked out of fear. Fans who were trying simply to get out of the danger zone found their visibility reduced by the thick black smoke.

About an hour after the game, some bold troublemakers started hurling garbage and bottles at police officers, who deflected the debris with riot shields. Protesters who rushed the police line were quickly subdued with blows from a truncheon.

Some protesters held what looked like pipes or hockey sticks over their heads as they jeered at officers. Newspaper boxes were wrenched off the sidewalk and hurled through store windows. Portable toilets were tipped as the stifling black smoke spread through the city's core.

While some members of the crowd expressed dismay that the police didn't take a more aggressive approach to the early vandalism, others said officers were heavy-handed.

"There's people who've been coming through the crowds suffering from tear gas," said 26-year-old Amy Zevick. "I'm seriously disappointed in the city of Vancouver and the country of Canada because it makes me feel the insecurity I read about in other parts of the world. I don't think it's OK to loot, but I also don't think it's OK to over-police and assume that every person is guilty."

Some seemed to revel in the rampage, recording the vandalism on cell phones and video cameras. A few congratulated those who tried to attack police, and others erupted with cheers every time something was damaged.

At least two young men covered in soot reported being roughed up by the police, but they weren't arrested. Rivers of poured-out alcohol, broken glass and trash made navigating the streets treacherous.

Fans wandered amid the chaos, some with bandanas or T-shirts pulled over their faces – either to hide their faces from police and TV cameras or to guard against the smoke, or both.

"What is most disappointing and disturbing is that we have spectators who will not go home," B.C. Solicitor General Shirley Bond said. "We need everyone to pay attention, we need them to leave the downtown and they need to stop treating this as a spectator sport. This is a dangerous situation where people need to go home." 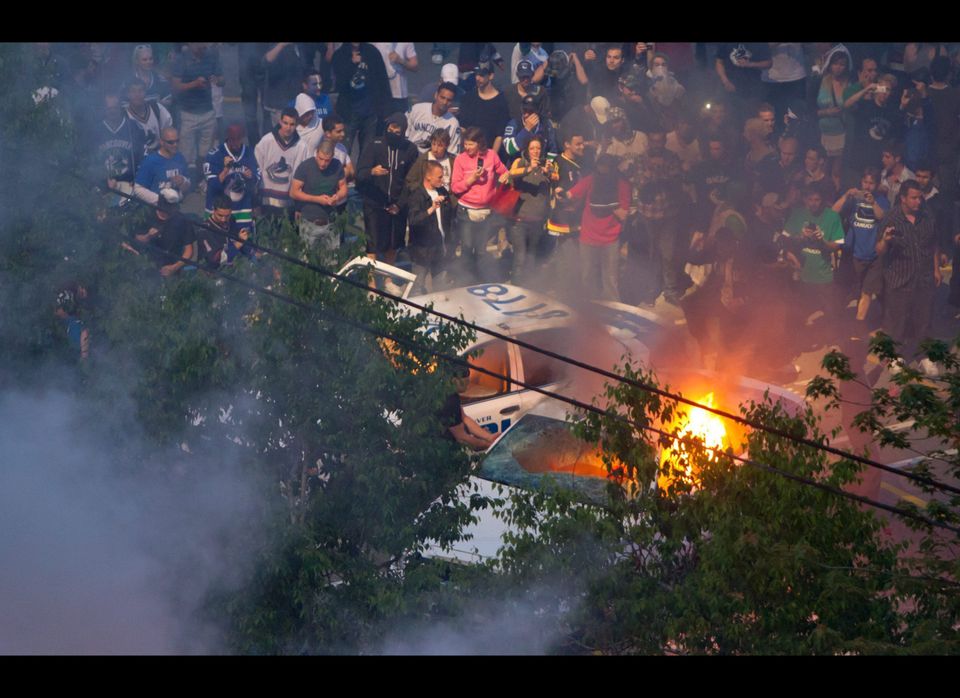