WARSAW, Poland (Associated Press) -- Vandals desecrated a monument marking the spot in Poland where hundreds of Jews were burned alive during World War II, scrawling "they were flammable" and a swastika on the memorial.

The government, Poland's Jewish community and Holocaust survivors on Thursday all strongly condemned the attack on the site, one of the most notorious cases in which local people collaborated with the Nazis in killing Jews during the German wartime occupation of much of Eastern Europe. 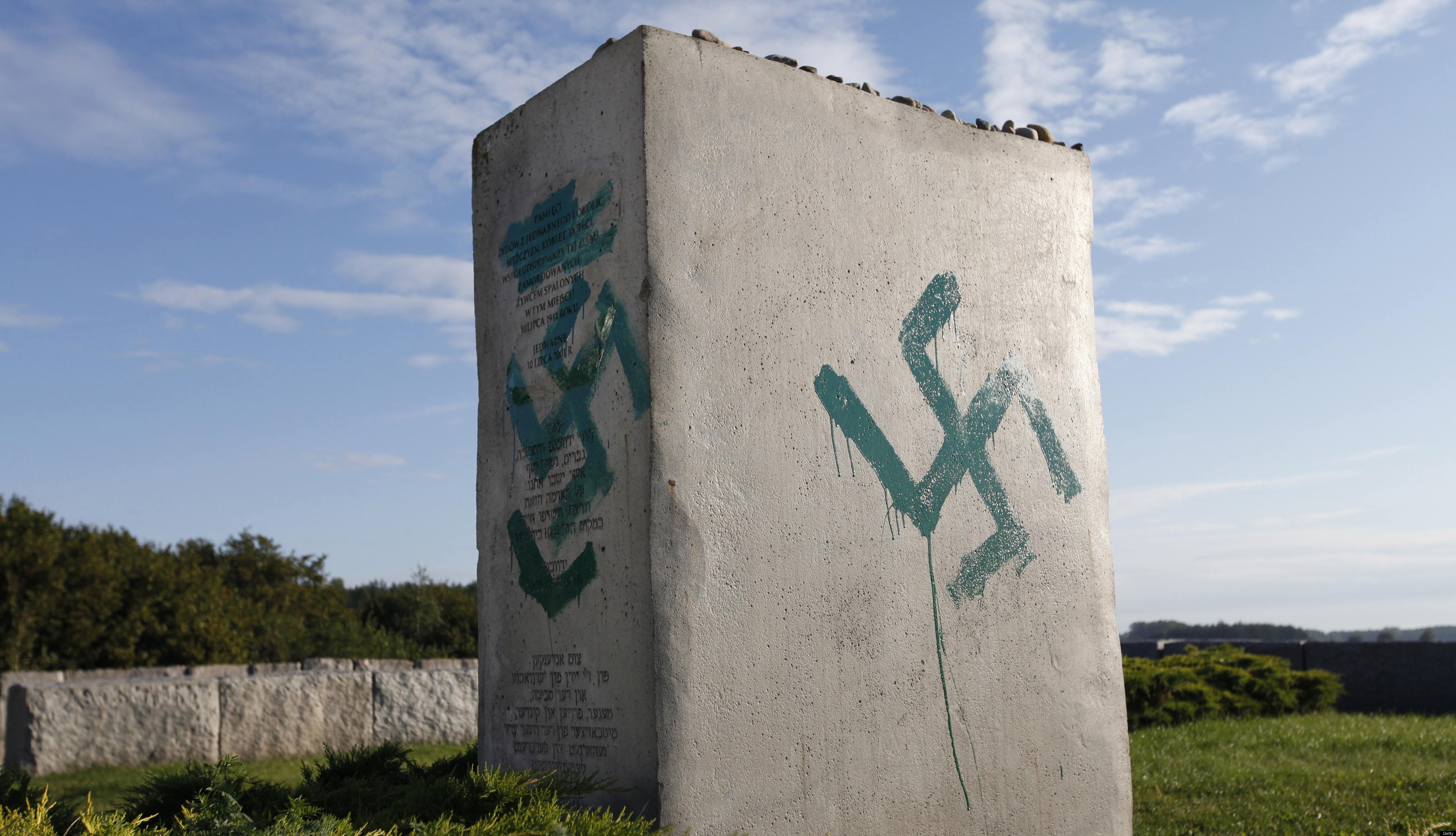 The monument in the town of Jedwabne (yed-VAHB-neh) honors the victims of July 10, 1941, when about 40 Poles hunted down the town's Jews, shut them up in a barn and set it alight, killing between 300 and 400 people.

The vandals this week used green paint to spray the symbols of a swastika and "SS" – the name of an elite Nazi force – on the monument, as well as the phrases "I don't apologize for Jedwabne" and "they were flammable."

"I utterly condemn these acts of criminality, alien to Polish tradition," Poland's Foreign Minister Radek Sikorski said in a statement. "There is no room for such behavior in Polish society – even if it is the work of but a small group of extremists."

Sikorski expressed solidarity with anyone affected by the act, and said he was convinced the perpetrators would be tracked down soon and face justice.

Police discovered the desecration Wednesday during a patrol and are trying to find the culprits.

The head of Poland's Jewish community, Piotr Kadlcik, called on authorities to crack down harder on anti-Semitic incidents, saying the desecration at Jedwabne comes after authorities have treated such cases with leniency for years.

The massacre came to light only a decade ago with the 2000 book "Neighbors: The Destruction of the Jewish Community in Jedwabne, Poland," by sociologist Jan Tomasz Gross, which sparked controversy and soul-searching in Poland.

The book led to a government investigation that confirmed that Poles – and not Nazi Germans – were to blame for the killings. Poland's then-president Aleksander Kwasniewski apologized for his country's sins, but some Poles today remain in denial that such horrors were committed by their own people.

Meanwhile, Polish officials on Thursday were commemorating the anniversary of the German attack on Poland on Sept. 1, 1939, which marked the start of World War II.

Poland's Chief Rabbi Michael Schudrich recalled that the swastika, the Nazi symbol, was both anti-Polish and anti-Semitic. He said the incident at Jedwabne does not reflect the sentiment of the country, but called on Poles to speak out strongly against such acts of hatred and anti-Semitism.

The American Gathering of Holocaust Survivors and their Descendants said in a statement they were "horrified" by the desecration.