A note is scribbled over the pile of highlighted topographical maps: "A silence made from a mighty sound is still a sound."

Rattana Vandy knows silence well. He grew up during the era of Cambodia's silence, the deafening echo of that followed the Khmer Rouge regime.

Vandy's exhibition Bomb Ponds examines the remains of America's secret 2,756,941-ton bombing campaign in Cambodia during the Vietnam War: craters left in the countryside that, during the rainy season, fill with still-toxic water. In nine landscape photographs and a one-channel documentary, Vandy documents this unspoken history and challenges the culture of silence--both America's too-quiet recognition of the bombing and Cambodia's reluctance to educate its youth about their history.

Like most of the so-called "new generation," Vandy (b. 1980) grew up with little knowledge of his country's recent war history. Formal curricula about the Khmer Rouge was absent from Cambodian schools for some 30 years, leaving Vandy to piece together what he overheard from his parents and the facts read in the English- and French-language histories he personally sought out.

In 2008, a photographic assignment covering the country's rubber plantations took Vandy to an eastern province, abutting the border of Vietnam. As he photographed the landscape, he noticed a crater in the earth.

It struck him as strange: perfectly circular, meters wide, brimming with murky rainwater. 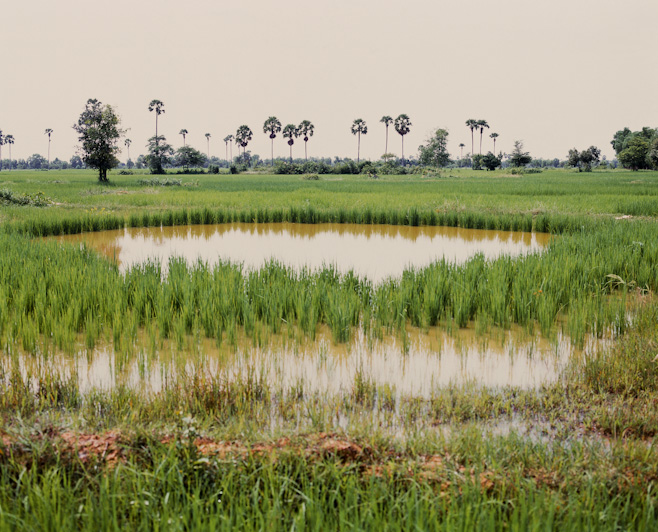 "What is that?" he asked a nearby villager.

The image returned with Vandy to Phnom Penh. He couldn't get it out of his head. The existence of these bomb ponds, physical evidence of a history kept silent, haunted him, and he resolved to seek out and document these bomb ponds.

It wasn't an easy task. "The bombings were done in secret, so there are no precise documents," Vandy says. "I started just blindly going out: looking at a map, thinking, 'There might be bomb ponds here,' going and talking to the old people.

"They all know. They pass by the bomb ponds everyday, and it seems like they've forgotten that they're there. But then you ask and they start talking, talking..." He waves his hands in the air, as though his fingers were words tumbling out of his own mouth.

Vandy hopes Bomb Ponds does more than document a silent history. "I want to inspire Cambodians to protest."