A cobalt blue streak sweeps through a narrow street in Istanbul as Various and Gould don fluorescent orange work vests and push brooms with a purpose. The lunchtime crowd gathers a few steps back and to the sides to witness a remarkable cloud of ultra-marine pigment forming a wake behind the two German Street Artists as they perform their new installation focusing on work and workers. 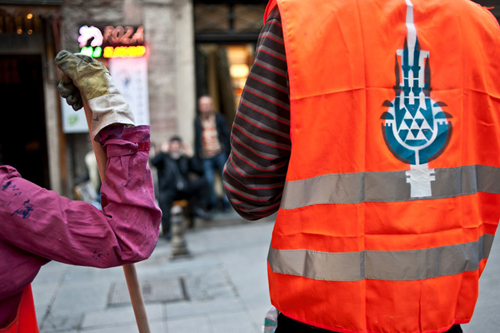 Simply by changing the color of the dirt, the effect of an everyday act by municipal workers is effectively transformed, if not understood. 34 kilos of non-toxic blue pushed up a street with confidence and industry by two people wearing an official-looking logo on their uniforms does cause confusion. "What happened? Did someone die?" asks a spectator. No, they are assured, it is an art performance - an explanation that calms most but not all, including restaurant owners here in this eastside tourist district of "Beyoğlu" while their dining guests look curiously with mouths agape. 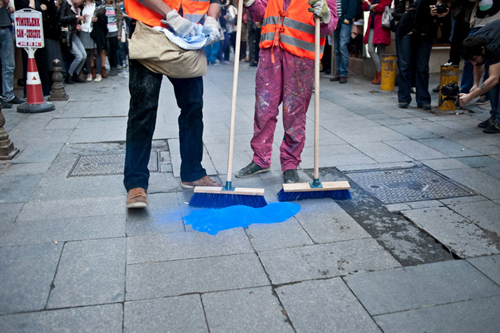 "Zu Gast Arbeit", loosely translated as "guest work", is the name of the piece by Various and Gould and like many of their wheat-pastes on streets in cities around the world, it is focused on the topic of "work". In this part of Istanbul where they are participating in a group show called "Outside In" with eight other Street Artists, V&G talk about the significance of this public act of sweeping and the changing nature of labor today, "Work nowadays is becoming increasingly invisible. It is getting harder to grasp and comprehend." With a hint of the ridiculous their custom "uniform" logo shows their affinity for workers in their home and host city. "On the backs of our orange vests we stenciled the two city emblems merged into each other - on the bottom the shape of Berlin's familiar television tower and on top the municipal logo of Istanbul. Together it can be read as the symbol for a utopian place called "Berlistanbul".

So how did this performance go? And why is the topic of work so important to the duo? Various and Gould talked with Brooklyn Street Art to give us a better understanding of "Zu Gast Arbeit".

Brooklyn Street Art: Your Street Art work often focuses on themes related to work and workers. While technological changes have caused many jobs to evaporate, the streets don't clean themselves, do they? The world still depends on workers, right?

Various and Gould: Yes, of course the world depends on workers. In many areas migrants do mainly these physically exhausting and badly paid jobs. Physical labor isn't very well respected and although this work is important, we hardly say "Thank You"! Also there ARE machines that clean the streets and replace the jobs of a lot of people. 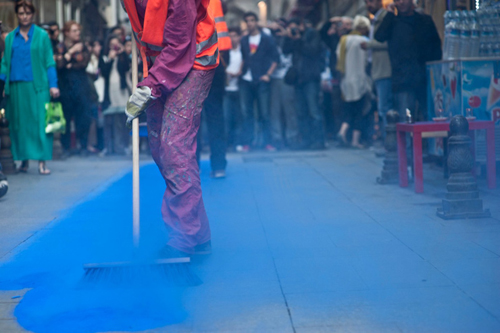 Brooklyn Street Art: Are you drawing attention to the act of physical labor, or to the life of the worker?

Various and Gould: It has a lot to do with the physical labor of a worker and also with the role of a worker. The monotonous repetition of the sweeping movement is somehow neutral and peaceful. The street cleaner is a familiar image to the residents and is normally not much noticed. He is somewhat official, as he is hired and paid by the city, but he is also perceived as low-grade.

It's just the little shift of a color in the performance that adds a different meaning to the act of sweeping and draws attention to it. The combination of "cleaning" (but actually doing the opposite of it) brought in a breeze of absurdity and senselessness. Art is irrational. And when an idea comes up, it comes from the guts and isn't much explainable at first.

In the book Momo, by Michael Ende, there is a beautiful scene, where Beppo, the street cleaner, tells Momo that it is important not to look for the end of the long street and the long distance you still have to go, but rather to put your concentration in every step and sweep and breath. Then it is fun and you do your work well and suddenly you reach the end of the street. 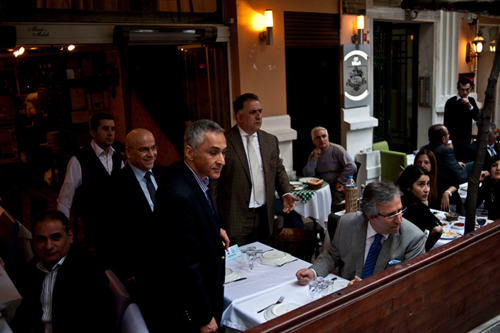 Brooklyn Street Art: While this blue streak through town is visual, would you say the project is more conceptual in nature?

Various and Gould: Actually it isn't very different from what we've done before: bringing some color to the street ... but yes, it is a conceptual work. We chose the medium of a performance very carefully. We knew that every detail matters and each has a certain meaning, so we tried to reduced the elements of the performance and simplify it. It is about a seeing something in a new way and the context plays a big role this performance. If it were performed this way in Berlin it wouldn't have the same meaning. (But since the element of chance is also part of a performance the perception of your work is unpredictable anyway.) 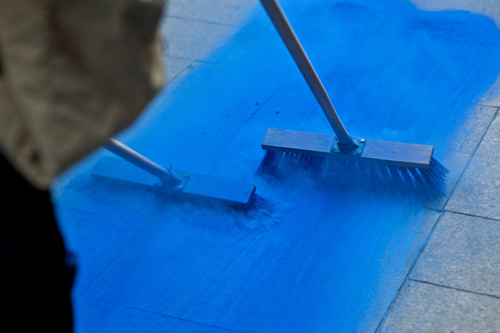 Brooklyn Street Art: What role does a public performance like this play in a community?

Various and Gould: This is hard to say, as we aren't part of any community in Istanbul! We were guests and tourists. We were a bit afraid of coming to Istanbul with this performance, not knowing the community so well and all the customs - there is always a risk of being called an "Orientalist" - meaning a person who goes somewhere with a Western behavior of superiority.

And as the Turkish-German guest worker issue is as quite delicate, we didn't know how our performance would be understood and perceived. But we had the feeling the spectators were quite open. Although the performance was meant as a dialogue and contribution it clearly holds the potential of (cultural) misunderstanding and incomprehension. 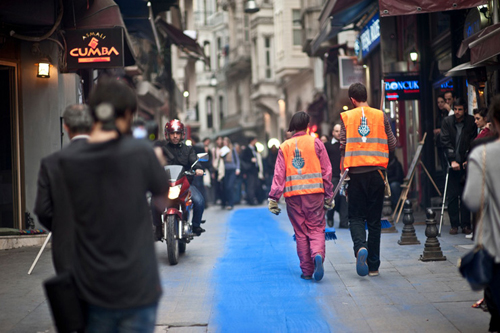 Brooklyn Street Art: Your logo merges the cultures of Berlin and Istanbul. Can you talk about the significance of these two cities to each other and their relationship to work?

Various and Gould: There are quite a few parallels. It seems that Berlin and Istanbul both are very popular as cultural hot spots at the moment. Many young creatives from all over the world are moving there and this is also accompanied by a higher tolerance for differences. For us these two cities are like a gate to a German-Turkish cultural exchange. In light of the history of Turkish guest workers coming, living and staying in Germany it is time for a merging movement toward each other from both sides. 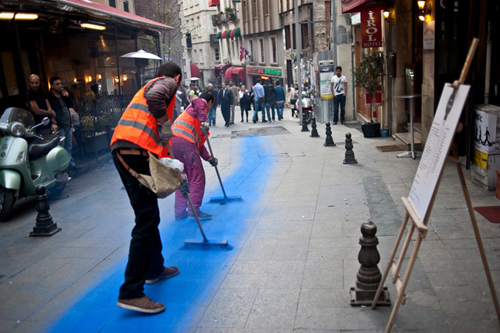 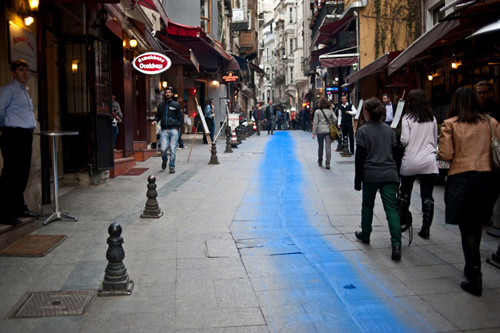 "Zu Gast Arbeit" - A performance by Various & GouldIn Istanbul, Turkey on the 5th of April, 2012.Photos by and copyright of Gülbin Eriş.With support from: Sinejan Kılıç and Önder DumanCurator: Sinejan Kılıç