The Vatican has admitted that it digitally blurred out a portion of a media handout photo of a letter in a way that The Associated Press claims alters the image’s significance and violates the standards of photojournalism.

The photo was released on Monday by the Vatican’s communications office, one day before the fifth anniversary of Pope Francis’ election and a few weeks after Francis condemned the spread of fake news as “evil” in a message to journalists.

The photo, shown below, is of a Feb. 7  letter from the retired Pope Benedict XVI to the Vatican’s chief of communications, Monsignor Dario Vigano. In the letter, Benedict responds to Vigano’s request that he review a new volume of books about Pope Francis’ theology. But a blurred portion of the letter reveals that Benedict told him he didn’t have time to complete the request.

In the part of the letter that is more visible in the photo, Benedict writes that the new book series is evidence of the “foolish prejudice” of Francis’ critics. He adds that the books demonstrate the “interior continuity between the two pontificates, with all the differences in style and temperament.”

The letter was reportedly read out in full by Vigano during a news conference. According to AP, Vigano appeared to use it to repudiate Francis’ critics who claim his papal style is a significant departure from that of his predecessor.

However, at the very end of the letter, Benedict appears to state that he hasn’t read the entire 11-part book series and, as a result, won’t be able to deliver a sound theological assessment.

On Wednesday, the Vatican told AP that it had blurred the final two lines of the first page ― the part where Benedict starts to explain that he didn’t actually read the new book project. The spokesman didn’t explain why the lines were blurred but said that the Vatican never intended for the full letter to be released.

Vatican officials did not respond to HuffPost’s requests for comment.

Edward Pentin, a Vatican expert and Rome correspondent for the National Catholic Register, published an English translation of Benedict’s full letter online. According to Pentin, Benedict tells Vigano that he doesn’t feel like writing a theological assessment on the books because “throughout my life it has always been clear that I would write and express myself only on books I had read really well.”

“Unfortunately, if only for physical reasons, I am unable to read the eleven volumes in the near future, especially as other commitments await me that I have already made.”

The Associated Press, and most major news media sites, have policies that restrict editors from digitally adding or subtracting from photographs. 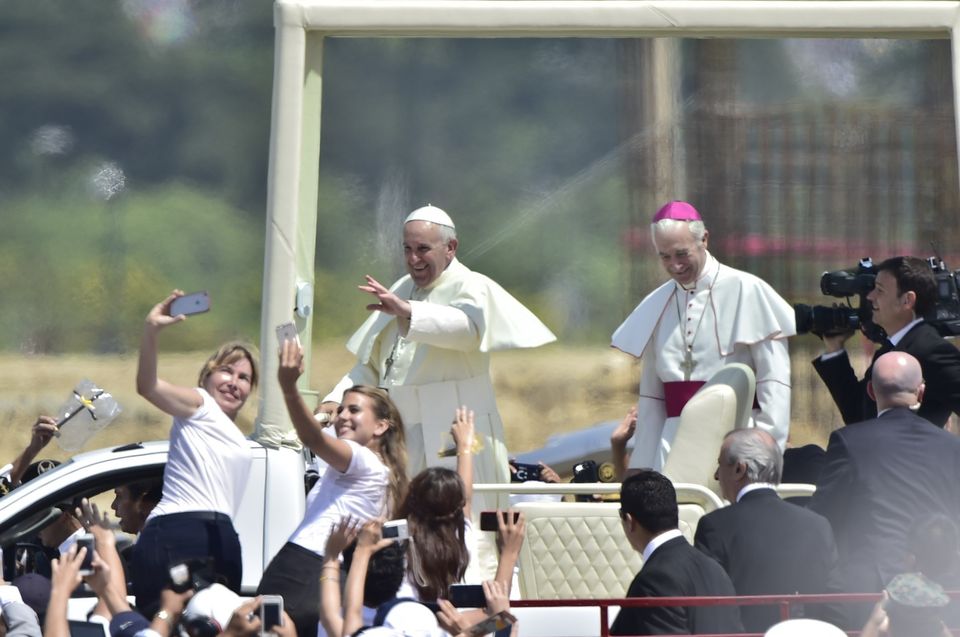 1 / 18
Pope Francis waves at the crowd of faithful gathering for an open-air mass at Samanes Park in Guayaquil, Ecuador, on July 6, 2015. Pope Francis, in South America on a three-nation tour, will perform mass in Ecuador Monday, with more than a million faithful -- many of whom camped out overnight -- expected to attend. AFP PHOTO/RODRIGO BUENDIA (Photo credit should read RODRIGO BUENDIA/AFP/Getty Images)
RODRIGO BUENDIA via Getty Images