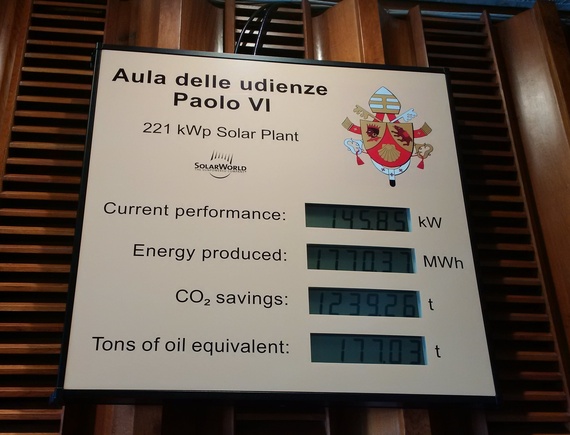 Rarely am I inspired by a piece of writing so revolutionary that it cuts through the hubris and cacophony of contemporary society. Pope Francis' encyclical, Laudato Si', did that for me. There is hardly a more widely and recently distributed piece of literature that so honestly rethinks the direction our society is heading.

Speaking truth to power and the publics, the encyclical encouraged a radical reorientation in how we communicate with each other and coexist with the natural world. What a welcome wake-up call.

Writing from the Vatican this week, nestled near Saint Peter's Basilica in a nearly 500-year old office with frescos overhead, I'm managing the media rollout for a historic meeting of the world's leading mayors, which the Pope attended today, to move forward the policies implicit in Laudato Si'. I can think of no more urgent task. It is time to turn this letter into law.

In mobilizing the publics and policymakers to act, however, the Pope identified a major obstacle: the "numbing of the conscience," wherein we no longer hear, in his words, the "cry of the earth or the cry of the poor." We've become oblivious to both.

The Pope is right. Just examine existing levels of empathy and norms of reciprocity, which are measurable. In fact, social capital in our cities is rapidly declining and we are witnessing less trust, less confidence and more skepticism, making any mayoral agenda to tackle social and climate crises - such as human trafficking and human-caused global warming -- all the more challenging.

In calling out those culpable for numbing the conscience, the Pope holds responsible, among others, an omnipresent media that encourages us to "eliminate relationships at a whim," shields us from the direct pain of others, and creates a "deep and melancholic dissatisfaction with interpersonal relations."

This all leads to low social capital, a reality that does not exist in isolation. It correlates strongly with income inequality, crime and violence. Thus, if you can improve social capital, by increasing trust and decreasing skepticism, you will likely see less crime and less violence, an urban agenda we can all get behind.

This is what the Pope's encyclical was about, despite being messaged publicly as primarily a planetary treatise. Pope Francis understood that for a sea change to happen in climate change work, society needed a serious social change. Our treatment of other people was as important as our treatment of the planet - since seeing either as disposable undermines social capital - with mass media playing an essential role in unwiring our common sensibilities and unraveling trust.

Pope Francis also understood the inextricable link and interdependence between social, economic and environmental sustainability and the exploitive potential in all three, and posited - provocatively, apparently, given the free-market pushback from New York Times' columnist David Brooks - that our market systems would function more effectively and fairly if we didn't commodify people and the planet. What a thought.

If you can get at the core of that -- our proclivity to profit at the expense of people and planet - then you've got a teachable moment. And that's exactly what Laudato Si' attempted and what the Vatican's Pontifical Academy of Sciences -- led by the ever-committed Chancellor Bishop Marcelo Sanchez Sorondo and a membership that includes nearly 70 Nobel Laureates - is attempting this week by hosting mayors from cities big and small, rich and poor, unequal and equal, drought-ridden and water-rich, climate change-inducing and climate impacted.

From New York City, whose mayor is dealing with gross income inequality's tale of two cities and the potential for another hurricane-flooded disaster, to Sao Paulo, whose mayor is dealing with a serious drought crisis, the cities attending the Vatican summit are trying to dial back extensive social-environmental exploitation that has left their people and the planet plundered. In response, mayors are committing to reducing their greenhouse gas emissions by 80-90 percent by 2050, committing to 100 percent renewable energy, and making available anti-human trafficking trainings to all cities.

These mayors are having to answer directly and daily for these ills and are as close as you're going to get in engaging disenfranchised and disengaged constituencies. Federal officials seem far away, especially when the impacts are in the public's literal and proverbial backyard.

This is why mayors are going to be asked at the Vatican summit to commit to concrete sustainable development goals, an agenda that the United Nations is ratifying this September and rolling out next year. And why cities such as San Jose, New York City and Baltimore are already lining up, as part of a new UN-affiliated initiative organized by the UN Sustainable Development Solutions Network, to develop clear targets and timelines for manifesting more sustainable municipalities. This is an inspiring start.

These cities recognize that we can't keep building our communities on the backs of our brothers and sisters and the natural world. A different path is a must if we want a world worth living in by year 2050. This week's summit at the Vatican, in the still-active wake of the encyclical, might well be a critical turning point in the global wake up to that reality. In the meantime, amidst Rome's sweltering summer heat wave, let's pray for a thaw of the numbed conscience of which Pope Francis spoke.

Michael Shank, PhD, is adjunct faculty at George Mason University's School for Conflict Analysis and Resolution and a media consultant for the Vatican's Pontifical Academy of Sciences.