The Mexican offensive against Santa Muerte (Saint Death) launched by former president, Felipe Calderon, has now gone global. In an interview last week with a Peruvian Catholic news site (Aciprensa), the President of the Pontifical Council for Culture, Cardinal Gianfranco Ravasi, condemned the cult of the skeleton saint as "sinister and infernal." The Italian prelate, whom Vatican watcher John Allen recently called "the most interesting man in the Church" and even profiled as a candidate for the papacy, called for both Church and society to mobilize against devotion to Saint Death.

"Everyone is needed to put the brakes on this phenomenon, including families, churches and society in its totality." The cardinal explained that devotion to Santa Muerte "is the celebration of devastation and of hell." The influential member of the Curia will take his message directly to Mexicans during his visit there next month to lead his pet project, the "Courtyard of the Gentiles," a Vatican program designed to engage with and evangelize non-believers.

Having closely followed the development of Santa Muerte's burgeoning cult on both sides of the U.S.-Mexico border, I had anticipated a condemnation by the Vatican, although I am surprised that it came before any such statement made by American bishops. So the pressing question is why a Vatican condemnation now? In accord with previous denunciations of the cult of the skeleton saint made by Mexican bishops, Cardinal Ravasi rejects devotion to her (she's a female figure) on theological grounds. From the Christian perspective, Christ defeated His last enemy -- death -- through His resurrection. Thus, the veneration or worship of a figure of death puts one in league with the enemy of Christ, or Satan.

Most of the statements made by Mexican bishops imply that devotees of Santa Muerte engage in Satanism unknowingly. Church officials can point to high profile criminal cases in which Santa Muertistas have committed heinous crimes in the name of the skeletal folk saint. Human sacrifice, narco-assassinations and other lurid crimes have been committed in Mexico and to a lesser extent here in the U.S. by a small minority of devotees who believe that Saint Death sanctions if not blesses such nefarious deeds.

Beyond the theological realm, the current religious economy of Mexico and Latin America provides a compelling explanation for not only the condemnation of "satanic sects" but for other dynamic religious competitors. For the past three decades both national bishops' conferences and the Vatican have been denouncing the "invasion of the sects" in Latin America. Of course, Pentecostals, the most vibrant competitors, have been the primary object of condemnation, but Mormons, Jehovah's Witnesses, New Age groups and Spiritists have also been inveighed against. Pope John Paul II shone a global spotlight on the situation during his trip to the Dominican Republic in 1992 when he accused Pentecostal evangelists of being "rapacious wolves" raiding the Catholic flock.

Thus, in the context of Catholic decline in Latin America over the past half-century in which Brazil, home to the largest Catholic population on earth, might not even be a Catholic-majority country within 15 years or so, the Church, particularly in Latin America, is in a state of panic over its losses. Even more disconcerting for the hierarchy is the fact that Latin America was 99 percent Catholic as late as the 1940s.

So why the condemnation of the cult of the Bony Lady (one of her main monikers) now? Undoubtedly, concern with her cult at the Vatican has been fast-tracked by the election of Pope Francis, the first Latin American pontiff, and by his appointment of Honduran Cardinal Oscar Rodriguez Maradiaga to head the newly formed papal advisory council of eight cardinals. Pope Francis is most likely familiar with Santa Muerte's Argentine cousin, San La Muerte, who is the second of three skeletal folk saints who command widespread devotion in the Americas. How oddly coincidental it is that San La Muerte's main myth of origin portrays him (he's a male figure) as a Jesuit priest! Like his Mexican cousin, San La Muerte is a regular on the crime pages of Argentina and has also been rejected as a heretical cult by the Church there. There is also a good chance that Cardinal Maradiaga is aware of Mexican Santa Muerte as recent press reports in Honduras have focused on devotion to her there with one even detailing the immolation of her effigy in a bonfire set by local police.

In addition to the top two prelates at the Vatican being Latin American, Santa Muerte has been ubiquitous in the global press since my book, "Devoted to Death: Santa Muerte, the Skeleton Saint," came out last year. As the first book-length academic study in English, it has been the basis for several high-profile news stories on the skeleton saint, including Russell Contreras' excellent Associated Press piece published last month. The Peruvian Catholic news site that interviewed Cardinal Ravasi includes links to several of these news stories.

In short, the confluence of theological concerns, religious competition, new Latin American influence at the Vatican and media coverage have resulted in Cardinal Ravasi's condemnation of the cult of Santa Muerte as the embodiment of Latin America's "culture of death." 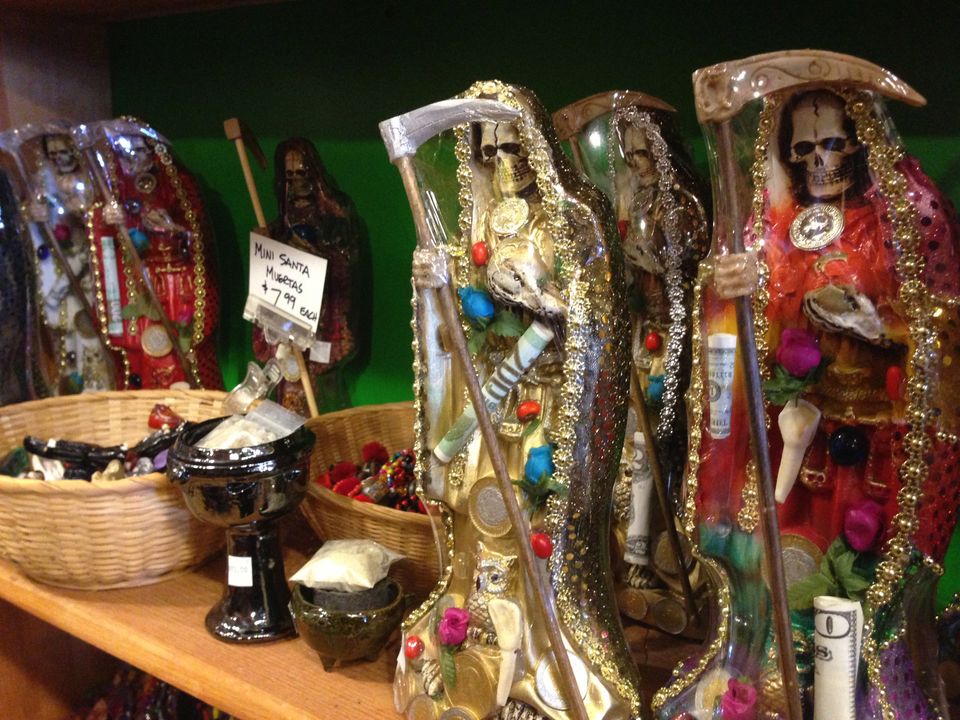 1 / 43
FILE - In this Feb. 13, 2013 file photo, statues of La Santa Muerte are shown at the Masks y Mas art store in Albuquerque, N.M. As Breaking Bad finishes filming its fifth and final season in Albuquerque, the popularity of the show is providing a boost to the economy and creating a dilemma for local tourism officials as they walk the fine line of profiting from a show that centers around drug trafficking, addiction and violence. The store provided the statues used in the chilling opening scene of the shows third season, in which a pair of cartel assassins crawl to the saints shrine in Mexico to request some divine help. (AP Photo/Russell Contreras, File)
AP